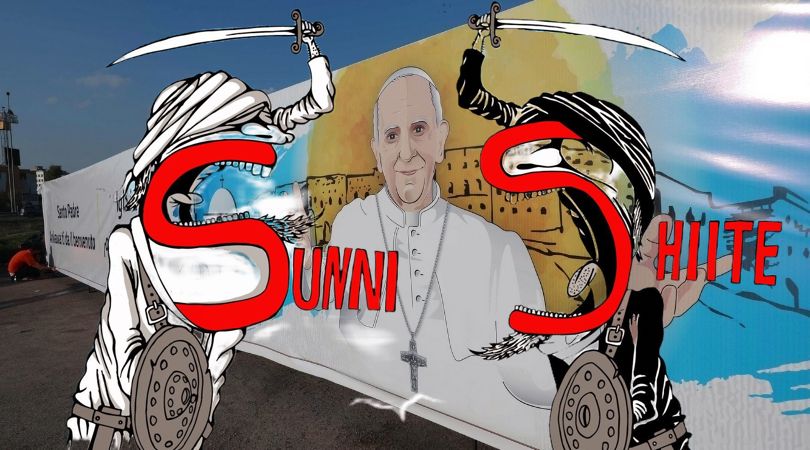 Shia terrorist militias have exacerbated the myth of a "Shiite-Catholic alliance" by issuing a statement welcoming the pope and saying they will halt attacks on U.S. forces and their logistics convoys during Francis' tour of Iraq.

In a series of posts on the instant messaging platform Telegram, top Salafi jihadists including supporters of Islamic State (ISIS) and Al-Qaeda are condemning Shiites as the new allies of Christians against Sunnis.

The messages, intercepted by the Middle East Media Research Institute's Jihad and Terrorism Threat Monitor (JTTM) division, use the pejorative terms "Rafidites" and "Safavids" to insult Shia Muslims for welcoming the pontiff to Iraq.

"Rafidites" — a term of abuse given by Sunnis to Shias — is used to describe the Shia rejection of the first four caliphs after Muhammad, holding that the fourth caliph, Ali, should have succeeded Muhammad as the religion's head because he was the prophet of Islam's son-in-law.

The "Safavids" are the Iranian dynasty (1501–1722) that established the territorial and Shiite theocratic principles of modern Iran — a Shia-majority nation. Salafi jihadists use the term pejoratively to refer to Iran for spreading Shiism by force and attempting to rule the Middle East.

Plots will be hatched in the city of Ur in the guise of interfaith dialogue.

Sunni Syrian cleric 'Abd al-Razzaq al-Mahdi, currently involved in fighting the Syrian Civil War against the Syrian government, is warning that the pope's visit to Iraq is meant to strengthen the "old alliance between the Church and Safavism."

Francis is also seeking to bless "the mistreatment of Sunnis that Iran's lackeys perpetrated under ISIS" and "to grant legitimacy to Iraq's 'Safavid Rafidite government,'" al-Mahdi claims.

Dr. Abu Abdallah al-Shami, head of the Syrian jihadi group the Ansar Al-Deen Front, which is aligned with Al-Qaeda, is accusing Shiites of working together with Islam's enemies — the Christians — against Sunnis.

The Shiites "ally with the enemies of the religion of whom everyone is aware of their enmity — the Jews, Christians and polytheists — and are hostile to Allah's saints," al-Shami writes.

Al-Shami attempts to bolster his accusation by including a poster advertising Francis' visit to Iraq with pictures of the pontiff and Shia Grand Ayatollah Ali al-Sistani.

The pope is committed to the false claim that Islam is a religion of peace.

On the poster, the revered al-Sistani, who granted the pope a rare audience in the Shia holy city of Najaf, is telling Iraqi Christians: "You are part of us, and we are part of you."

In comments to Church Militant, distinguished historian and author of 21 books on Islam Robert Spencer observed that:

But Francis has once again run into the law of unintended consequences: When one goes into a situation knowing little (at best) about those with whom one is dealing and about the history of the parties involved, one is inevitably going to fall into unforeseen trouble. The pope is committed to the false claim that Islam is a religion of peace. On that basis he has sought peace with Muslim leaders and assumed his efforts will help bring that peace.

But, because Islam isn't a religion of peace, but teaches warfare against unbelievers and the death penalty for apostates, his Iraq trip is being used by one party of Muslims to justify ongoing hostility against another. If he had not committed himself to acting upon falsehoods to begin with, but had recognized the unpleasant truths he has tried to ignore and obscure, this wouldn't have happened.

Just before the pope's visit, Saraya Awliya al-Dam (Guardians of the Blood), an Iraqi Shiite terrorist group loyal to Iran that claimed responsibility for the Feb. 15, 2021 rocket attack on a U.S. base in Erbil, said it would cease "military activities" during the papal trip to show respect for al-Sistani.

"Saraya Awliya al-Dam will halt its military activity in all forms during the pope's visit as a sign of respect for Imam al-Sistani. We are Arab, and we honor guests and do not betray them as the Americans did with Iraq's guest and soldier Haj Qasem Soleimani and his companions," the statement said.

We welcome the pope of the Vatican to the sacred lands of prophets, Imams, honorable men, the land of resisting mujahideen (jihadists). We tell you, humble man: If your visit had taken place when the Yezedi and Christian women were captured and when one-third of Iraq's land was seized by Daesh, it would have been more significant for those who were in pain.

The militia's cessation of hostilities, however, only provoked further outrage and allegations of a Shiite-Catholic conspiracy.

In one message, ISIS supporter Muhtasib posts a page from the ISIS Al-Naba weekly, which reports ISIS attacks on Christians in the Democratic Republic of the Congo.

Muhtasib comments sarcastically: "On the occasion of His Highness the pope's visit to Iraq," adding a "sweet smile" emoji and another emoji of a hand making the OK symbol.

We must not be overly optimistic about the visit of the pope from the Vatican or hope that it will make our country 'cool and safe.'

In another post, ISIS supporter Nahawand writes that Pope Francis' visit to Iraq and his meeting with al-Sistani demonstrate that the Shi'ites are the true rulers of the country.

Describing Francis as the "one who has undertaken the arrogance of Christianization and the Crusader project," Nahawand mocks the celebration of the papal visit by the Iraqi Shiites — which proves that the real ruler of Iraq is "a mute Iranian turban-wearer (al-Sistani)."

Pope Francis' visit "demonstrates that today's struggle is between Islam and unbelief," he adds, noting that those who believe in "rapprochement of religions" or do not hate Christians "practice polytheism against Allah and do not believe in His religion."

Pope: 'Better Off Improving His Own State'

However, not all Shia militias were supportive of Pope Francis' visit.

Two days before the pope touched down on Iraqi soil, Abu Ali al-Askari, an official in the Hezbollah Brigades, an Iran-backed Shi'ite Iraqi militia, criticized the visit, calling on Iraqis not to pin too many hopes on it.

"We must not be overly optimistic about the visit of the pope from the Vatican or hope that it will make our country 'cool and safe' [Quran 21:69]," al-Askari cautioned.

The pope "would have been better off improving his own state [the Vatican], no bigger in size than one of the neighborhoods of Sadr City in Baghdad, before acting to improve other states," the militia leader insisted.

Warning "against the plots that [will be] hatched in the city of Ur in the guise of interfaith dialogue," al-Askari stressed that "no dialogue is possible with those who steal land and commit murder, especially in light of the normalization [conducted] by the traitors of this nation."

"We question the benefit of choosing that location at this particular time," al-Askari remarked. 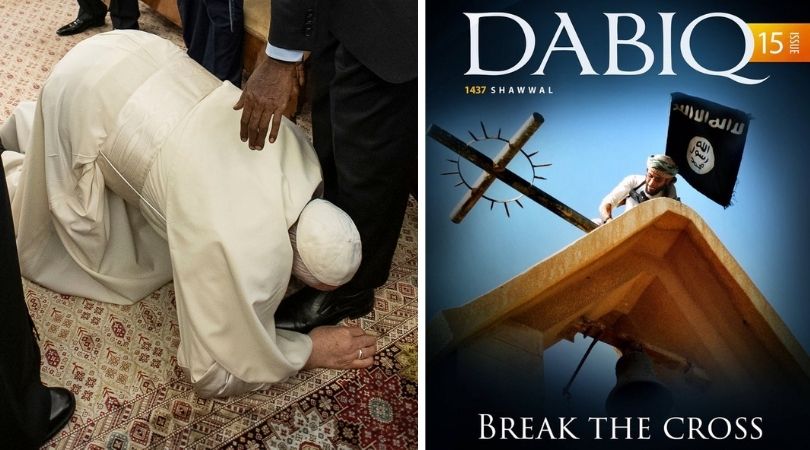