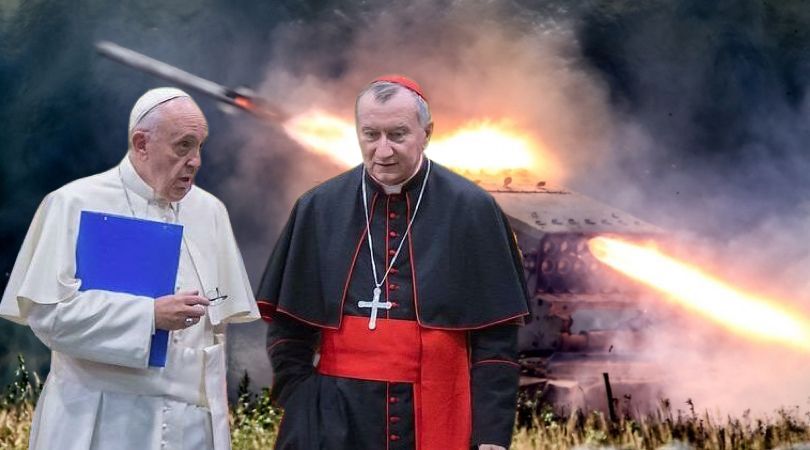 VATICAN CITY (ChurchMilitant.com) - Pope Francis is making a sudden U-turn on the morality of war after declaring all wars to be unjust and upending the Church's doctrine on "just war."

"There is no such thing as a just war; they do not exist!" the pontiff told participants at the International Congress of the Pontifical Foundation Gravissimum Educationis on Friday.

On Tuesday, however, immediately after speaking to the pontiff on the telephone, Ukrainian president Volodymyr Zelenskyy told Italian parliamentarians that Francis had given him the green light to fight a just war.

"Today I spoke with His Holiness Pope Francis, and he said many important things," Zelenskyy told Italy's Parliament via video link.

This is not the first time the pope has been quoted saying something contrary to Church teaching.

"And I responded," Zelenskyy recounted, that "our people have become the army; [they became] the army when they saw the evil their enemy does — what devastation it has left."

The Holy See Press Office confirmed Francis' phone call with Zelenskyy, but Vatican News omitted the pontiff's affirmation of a defensive war in its report on the private conversation.

"The use of weapons is never something desirable because it always carries a very high risk of killing people or causing serious injury and terrible material damage," Parolin said, noting "both sides must refrain from the use of prohibited weapons."

"Military aid to Ukraine may be understandable," the Vatican's second-in-command stated. "The right to use force for self-defense purposes is associated with the duty to protect and help innocent victims who cannot defend themselves from aggression."

People who manufacture weapons or invest in weapons industries are hypocrites if they call themselves Christian.

However, earlier on March 16, Pope Francis categorically told Russian Orthodox Patriarch Kirill: "Wars are always unjust since it is the people of God who pay."

"There was a time, even in our Churches, when people spoke of a holy war or a just war," Francis observed. "Today we cannot speak in this manner. A Christian awareness of the importance of peace has developed."

Catholic columnist and author of Lost Shepherd: How Pope Francis is Misleading His Flock Philip Lawler explained how Francis has "contradicted himself."

What would you call the Ukrainian defense effort? Is it not obviously warfare? If you believe that Ukraine is justified in seeking to repel an aggressor, then you are arguing that this is a just war. Defense against aggression is a classic example of a casus belli, according to the just-war tradition. But Pope Francis has apparently dismissed that tradition.

Did Zelenskyy misquote the pope? If so, the Vatican should issue a prompt clarification. But this is not the first time that the pope has been quoted saying something contrary to Church teaching — or, as in this case, contrary to his own public teaching — and the Vatican has remained silent, allowing the contradiction to stand.

Meanwhile, while Francis was denouncing all wars as unjust in his conference with Kirill, the metropolitan archbishop of Philadelphia for the Ukrainian Catholic Church in the United States, Borys Gudziak, appealed to Western allies to step up the supply of weapons to Ukraine.

"There needs to be massive defensive and massive humanitarian aid," Gudziak said. "What good is it if you feed the stomachs of these children, these women, these people in cities, if their brains are going to be blown out — if their apartment buildings are going to be rendered into rubble?"

Earlier, the Ukrainian Council of Churches and Religious Organizations appealed to the North Atlantic Treaty Organization to "take urgent measures to introduce a no-fly zone over Ukraine and provide the armed forces of Ukraine with modern air defense equipment."

We can no longer think of war as a solution, because its risks will probably always be greater than its supposed benefits. In view of this, it is very difficult nowadays to invoke the rational criteria elaborated in earlier centuries to speak of the possibility of a "just war." Never again war!

In 2015, on a pastoral visit to Turin, Francis issued his toughest condemnation to date of the weapons industry. "People who manufacture weapons or invest in weapons industries are hypocrites if they call themselves Christian," the pontiff told a gathering of young people and children.

"No, no, Father, I don't manufacture them, no, no. I only have my savings, my investments in arms factories. Ah! And why? Because the interest is somewhat higher. ... And being two-faced is common currency today — saying something and doing another. Hypocrisy!" the pope preached.

There is no such thing as a just war; they do not exist!

Interestingly, in 2017 Francis appointed Prof. Nigel Biggar, a leading anti-pacifist ethicist, to the Pontifical Academy for Life. The Anglican theologian's authoritative book In Defence of War dismisses pacifism as "the virus of wishful thinking."

"I am a realist, therefore, about the fact of intractable human vice on the international stage," Biggar writes. "If all are somewhat culpable, some might be still more culpable than others."

"To be right, a responsive intention must aim to oppose, perhaps reverse, grave injustice," he notes. But "once we relax the leash on the dogs of war, we should expect to be dragged where we do not want to go."

While some Protestant denominations like the Anabaptists, the Quakers and the Mennonite Brethren dogmatically teach pacifism, the Catholic Church does not teach pacifism in its magisterial statements. Rather, Gaudium et Spes forewarned: "Certainly, war has not been rooted out of human affairs."

"As long as the danger of war remains and there is no competent and sufficiently powerful authority at the international level, governments cannot be denied the right to legitimate defense once every means of peaceful settlement has been exhausted," the Vatican II document noted.

Commentators have noted that Francis' repeated emphasis on pacifism is more in keeping with the above Protestant sects than with traditional Catholic teaching, which follows St. Augustine's "just war" doctrine.

"Unless Pope Francis urged President Zelenskyy to surrender, there is a contradiction somewhere in the pope's recent statements. As usual, he leaves us guessing which statement we should take seriously," Lawler concluded.