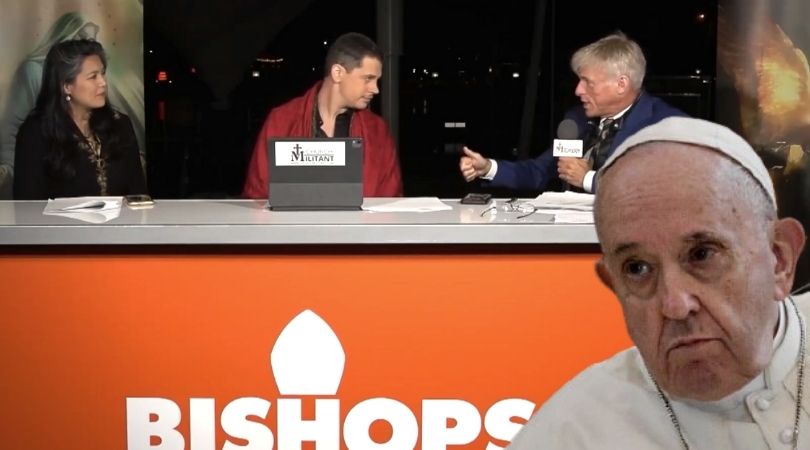 An apostolic mission in Baltimore

Pope Francis knighted two Vatican journalists on Saturday, lauding the mission of journalism and praising the journalists' alleged efforts to uncover the truth. The pope bestowed the ranks of "knight" and "dame" on Philip Pullella and Valentina Alazraki, respectively.

"I also thank you for what you tell us about what goes wrong in the Church, for helping us not to sweep it under the carpet," said Pope Francis, continuing, "and for the voice you have given to the victims of abuse: Thank you for this."

A Vatican insider told Church Militant that Pullella, who has worked for decades within the Vatican, has settled into the culture of cover-up and accomplished little to advance real journalism.

Pope Francis emphasized three key aspects of journalism — listening, investigating and reporting. He noted that "journalism does not come about by choosing a profession but by embarking on a mission, a little like a doctor who studies and works so that the evil in the world may be healed."

Pullella, who has worked for decades within the Vatican, has settled into the culture of cover-up.

Earlier this year, however, the Holy Father made aggressive comments regarding criticisms of him by the Catholic media. He pointed to "a large Catholic television channel that has no hesitation in continually speaking ill of the pope," calling it "the work of the Devil." Insiders revealed that Francis' attack was directed at the Eternal Word Television Network (EWTN).

The Holy Father also raised eyebrows this year when he used a vulgar sexual innuendo in reference to the media.

By contrast, Pope Francis' predecessor Benedict XVI has made efforts to advance authentic Catholic media throughout the world. Benedict recently founded the Tagespost Foundation for Catholic Journalism, a foundation to train Catholic journalists in Germany. Benedict noted that the quickly developing internet and media world "has opened up a world of knowledge and learning that previously, for many, could only be accessed with difficulty, if at all."

Austin Ruse, president of the Center for Family and Human Rights, claims that Francis is being deceived by his circle of Vatican advisors and contacts, using homosexualist Fr. James Martin as an example. Martin is a champion of so-called gay rights and is seen as a poster boy for progressivism in the Church. The ideology Martin espouses is errant and promotes gender confusion.

But the pope expressed admiration for Martin when writing to him in June.

"I want to thank you for your pastoral zeal and your ability to be close to people," Pope Francis said in his letter, "with the closeness that Jesus had and which reflects the closeness of God."

The Holy Father further praised Martin's 'ministry' to the gender-confused.

Ruse calls out this endorsement of Martin's dissident LGBTQ+ mission, claiming that the pope doesn't listen to conservative Catholic news outlets that "have been covering Martin's true self for years." He posits that the Holy Father listens primarily to his inner circle of contacts and clerics instead of heeding honest journalism.

Church Militant has been exposing corruption in the Church for years, never fearing to give Catholics the truth about the abuse and coverup of the homo-heretic hierarchy. Yesterday, in Baltimore, Church Militant led a prayer rally called Bishops: Enough Is Enough. The rally was within earshot of the fall General Assembly of the United States Conference of Catholic Bishops.

The prayer rally's purpose was to call U.S. bishops to account for the ugly truths and corruption unearthed by the honest journalism and investigation of faithful Catholics. Catholic leaders and activists stood across from the bishops' conference to pray for the bishops and exhort them to do the following:

These necessary changes quell only a few of the scandals plaguing the Church, but if made, they would represent a wonderful new beginning.

What has been buried for decades by prelates and Vatican veterans is finally being exhumed by honest Catholics. Pope Francis' recent words might have struck a truthful chord that he didn't intend when he said, "Thank you for your search for the truth, because only the truth sets us free."