SAGINAW (ChurchMilitant.com) - After the sudden death of Bp. Joseph Cistone Tuesday, a bishop known for covering up sex abuse is being named to temporarily govern the diocese of Saginaw, Michigan.

Bishop Walter Hurley, former bishop of Grand Rapids and, before that, auxiliary bishop of Detroit, was appointed to Saginaw the day after Cistone's sudden death. Cistone was found collapsed on the bathroom floor of his home late Tuesday morning, after a Religious Sister of Mercy — who had been looking after the bishop — placed a 911 call at 10:20 a.m.

Investigative reporter Jay McNally, who worked for the Detroit archdiocese in the 1990s, said, "If you ever wondered how and why the Catholic Church kept known pedophile priests in action even after victims complained that these priests sodomized them dozens of times annually for years, let me introduce you to Bishop Walter Hurley, one of the most disgusting men I had the misfortune of ever meeting."

Hurley was ordained by then-Abp. John Dearden of Detroit in 1965. He served as delegate for clergy misconduct issues from 1988–1995, and from 2002–2005, afterwards going on to be bishop of the diocese of Grand Rapids.

"This cretin was the director or manager of the process that handled complaints about priests molesting children in the Archdiocese of Detroit in the ‘90s when I worked there," said McNally. "Read about Fr. Gerald Shirilla, who was protected by Hurley for many years."

Shirilla was a notorious homosexual predator whose abuse of boys and young men spanned decades in Detroit.

The earliest allegations involved abuse of altar boys in 1964, four years before Shirilla's ordination to the priesthood. He is also accused of molesting a seminarian in 1970, who went on to commit suicide. In 1980, Shirilla was removed from the faculty of Sacred Heart Seminary owing to sexual involvement with seminarians.

Hurley's tenure as delegate for clergy misconduct matters would've made him privy to every abuse complaint lodged against Shirilla. In spite of multiple credible allegations of molestation, Hurley helped Shirilla remain in ministry.

It was Hurley who "stood silent when Shirilla was re-appointed in 2002 and was in charge of the review board that supposedly removed Shirilla in 1993," McNally explained.

After public outcry, Shirilla was removed from his assignment in Alpena in the Gaylord diocese in 2002. The next year, Hurley was named bishop of Grand Rapids.

"Shame on Abp. Allen Vigneron for insulting faithful Catholics through Michigan with this appointment," McNally said, referring to Hurley's appointment in Saginaw. "Double-shame on everyone in the media who refuses to report honestly about the disgusting career of Walter Hurley."

Questions remain about Cistone's death. In the days leading up to it, Cistone had been more active than usual, presiding over a service at his cathedral Sunday, and scheduled for a regular holy hour at a Midland parish the day he was found dead.

Although Vicar General Bill Rutkowski claimed at a press conference Tuesday that Cistone died from "natural causes" related to his medical condition (Cistone had been battling lung cancer for a number of months), the official cause of death cannot be determined without an autopsy report, which was not ordered by the medical examiner.

At the time of his death, Cistone was at the center of a criminal probe into sex abuse cover-up, the Saginaw prosecutor looking into his role on possibly protecting Fr. Robert DeLand, currently facing trial for sexually assaulting three young males. A March raid on Cistone's home saw his ipad, cell phone, laptop and other electronics seized, a computer crime unit tasked with combing through Cistone's items for evidence of criminal activity. 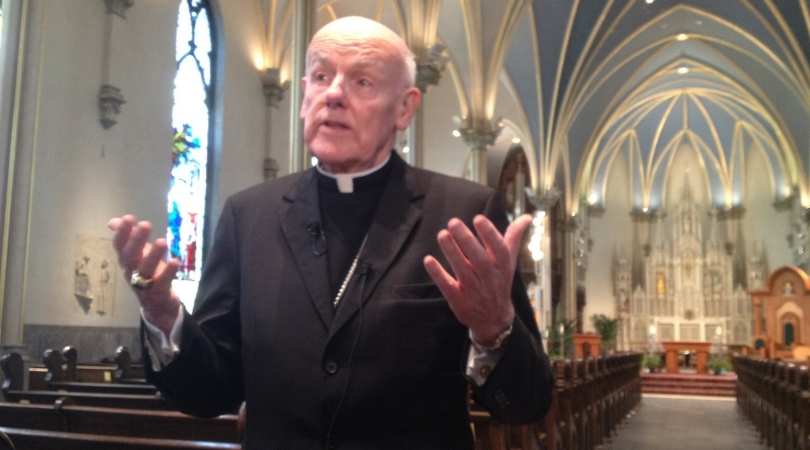