Prelate Ponders State of the Church

ROME (ChurchMilitant.com) - A top cardinal raised concerns about how his fellow prelates understand the nature of the Church and treat papal authority.

"The theory of the pope as autocrat, borrowed from 19th century Jesuit theology, not only contradicts the Second Vatican Council, but undermines the credibility of the Church with this caricature of the Petrine ministry," Cdl. Gerhard Müller told Spanish Catholic website InfoVaticana in September.

The German cardinal complained about views on papal authority expressed by his brother bishops during the September consistory in Rome.

"There was no opportunity to discuss the burning issues, for example, about the frontal attack on the Christian image of man by the ideologies of posthumanism and gender madness or about the crisis of the Church in Europe," Müller lamented.

Among those neglected issues, Müller also identified shortages of priestly vocations and Mass attendees. Instead, bishops "referred to the theory of the papacy as an unlimited power of divine right over the entire Church, as if the pope were a Deus in terris [Latin: 'God on land']," Müller said.

Cardinal Gianfranco Ghirlanda, the pope's top adviser on curial reform, represents an additional concern. Müller noted that Ghirlanda "holds the view that everything popes have said or done in the course of Church history is either dogma or law, de jure divine [Latin: 'of divine law']. This contradicts the entire Catholic tradition, and especially Vatican II."

Müller acknowledged that today's focus in the Church is on the ecology and concerns for the planet, rather than on Jesus Christ and concern for salvation. The cardinal attributed this earthly focus to the lure of worldly power, prestige, money and pleasure dominant in today's world. These lures have enticed many within the Church, leading them to attempt to create "a new world order without God," Müller said.

Quoting Matthew 16, Müller reminded people to resist this worldly perspective. "For what good will it be for a man to gain the whole world, if he loses his soul?" As if to answer this rhetorical question posed by Christ to His disciples, Muller then quoted Luke 12: "Seek rather His Kingdom, and the rest will be given to you."

Müller added that he sees worldliness in the Synodal Path in the Church of Germany. "In theatrical language, one would not know exactly whether to speak of tragedy or comedy with respect to this event," he noted.

The pursuit of worldly pleasure is also the underpinning of gender and sexual deviancy, he further elaborated.

"The only theme among all the themes is sexuality," Müller said, bemoaning deficient human understanding of this divine gift. He continued:

It is not understood as the gift of God granted to human beings as created persons (in our masculine and feminine natures), from which derives the responsibility to participate as father and mother in the work of God's creation and the universal will of salvation for one's own offspring, but as a kind of drug to numb the basic nihilistic feeling with the maximum satisfaction of pleasure.

While German bishops seem to be leading their flocks into schism, Müller doesn't think this is their intent. Instead, they are motivated by hubris mixed with ignorance, he said. This combination leads some clerics to believe they can change the Church from within.

These flaws stem from a lack of faith and understanding that the Church is the body of Jesus Christ animated by His Spirit. Members of the Church are simply cells within Christ's body, led and nourished by Him. Yet the movement to change the Church's sacred doctrine on sexuality and marriage, in essence, seeks to dethrone Christ and replace Him as head and king, as if the Church is an earthly democracy.

Faith in Christ puts the world in perspective.

Müller said there is little hope for the temporal world, given its present direction. The best hope is for people to remember that the fleeting things of this world do not provide fulfillment — only God, for whom we are made, does. Faith in Christ puts the world in perspective. Only with this eternal perspective can we understand life's meaning and purpose.

Christ "encompasses our temporal and eternal future," Müller assured the flock, reminding them of Jesus' statement in John 16:33: "Have courage: I have overcome the world." 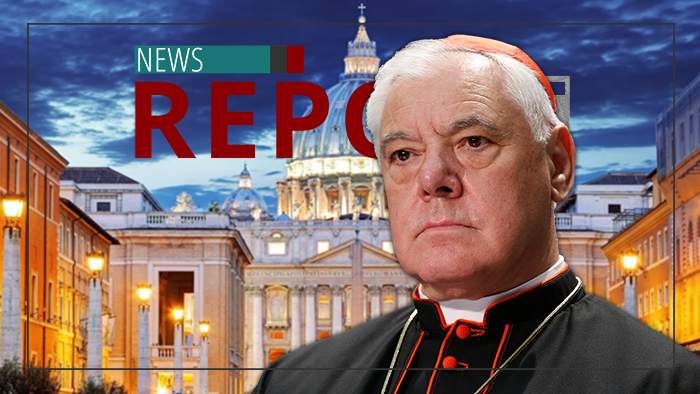 Watch
Müller: Pope Has No Authority to Change Doctrine
By Paul Murano   •   0