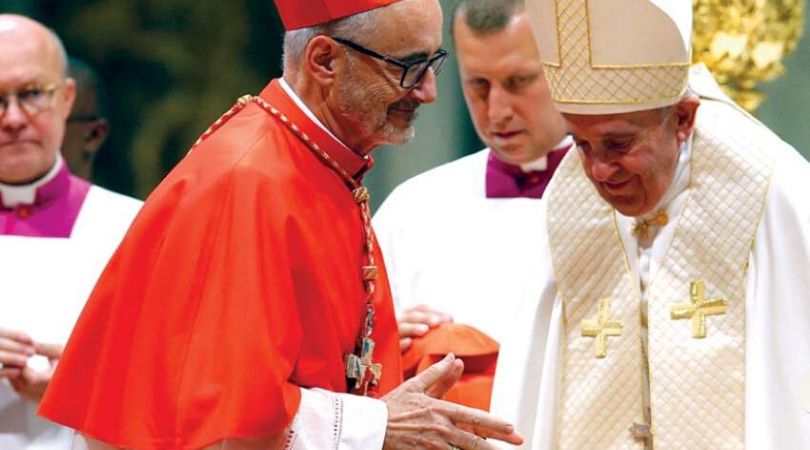 VATICAN CITY (ChurchMilitant.com) - Progressive cardinals and bishops are challenging the finality of the papal exhortation on married priests and women's ordination by arguing that Querida Amazonia doesn't shut down debate on burning issues threatening to divide the Church.

"Querida Amazonia doesn't resolve or close any of the questions," Cdl. Michael Czerny, who presented the exhortation to a packed press conference on Wednesday, told the media when asked if questions of married priests or women clergy were "still open for discussion and application."

Conflating the "magisterial document," which has "the authority of the ordinary Magisterium of the Successor of Peter," with the "final document" of the Amazon Synod bishops, which has "moral authority," Czerny claimed that "to ignore it would be a lack of obedience to the Holy Father's legitimate authority."

But to "find one or other point difficult could not be considered a lack of faith," the prelate, who has been lauded as an "activist for social justice," conceded at the press conference.

The final document, "The Amazon: New Paths for the Church and for an Integral Ecology," includes proposals in favor of married priests and ordaining women deacons and even hints at women priests, calling for conferring "ministries for men and women in an equitable manner in the Church in the Amazon."

Later, when asked how the two documents were meant to be read together, Czerny, who served as special secretary of the Synod of Bishops for the Pan-Amazon Region, told a Jesuit media outlet that the Pope's exhortation "officially presents" the conclusions of the synod in the final document.

That means that the Pope gives them to us and asks us all to read them and to read all of them so this isn't the moment we can say: "Well, so what about proposal six or proposal 27 or proposal 98," because we are to look at all of them and the Church in the Amazon and indeed the Church everywhere is welcome and invited to consider all the proposals.

"We are at a very important point in the synodal process. There are long roads ahead, as well as roads already traveled," Czerny commented, and on the issue of ordaining viri probati (married men of tested virtue), Francis "has not resolved them in any way beyond what he has said in the exhortation."

On the proposal for the ordination of women deacons, Czerny simply said the issue is still "being studied," awaiting a conclusion on the topic from a commission Francis formed in 2016 to study it.

"In the introduction to Querida Amazonia, Pope Francis explains that he does not want to replace or repeat the synod's final document. Rather, he presents it," Czerny stressed.

It is to be hoped that the interpreters of this document will refrain from unnecessary harshness.

The pontiff's two sentences in the introduction to his exhortation have become the topic of heated exegetical debate. The sentences are: "I would like to officially present the final document, which sets forth the conclusions of the synod," and "Nor do I claim to replace that text or to duplicate it."

If Cdl. Czerny is asserting that women can receive priestly ordination, then the following passage of art. 6 of the Doctrinal Commentary attached to the motu proprio Ad Tuendam Fidem issued by Pope John Paul II in 1998 would apply: "Whoever denies these truths would be in a position of rejecting a truth of Catholic doctrine 16 and would therefore no longer be in full communion with the Catholic Church."

Czerny's attempt to conflate the papal exhortation with the synod's final document was followed by Cdl. Reinhard Marx, who is pushing for an ultra-progressive Catholic Church in Germany through the so-called synodal path.

"By no means is it [the spate of controversial questions] off the table with the publication of the exhortation! Rather, Pope Francis speaks of his desire 'to officially present the final document' together with the apostolic letter, and invites us 'to read it in full,'" Marx, outgoing president of the German bishops' conference emphasized.

"As is well known, the two-thirds majority of the 280 [synodal fathers] in the final synodal document also advocated for exceptions to compulsory celibacy and stimulated further reflection on the admission of women to the diaconate," the German cardinal added.

However, a significant majority of progressive voices rejected the interpretation based on the conflation of the two documents and admitted that the Holy Father had failed to deliver on the agenda of women's orders and ending clerical celibacy.

"The pope simply kicked the can down the road. He doesn't even mention the recommendation of the possibility of married deacons being ordained as priests, which was what the synod conclusions had suggested," Bp. Robert Flock of the Diocese of San Ignacio de Velasco, Bolivia, told the BBC.

The Wijngaards Institute for Catholic Research slammed the pope's refusal to consider the ordination of women as "gender discrimination."

"This is a dereliction of his duty as a leader with the power to make positive change," even though in the Amazon "the majority of Catholic communities are led by women" and that "in a large number of these consultations, the permanent diaconate for women was requested," it lamented.

"After seven years in office, it seems he [Francis] talks the talk but does not walk the walk when it comes to enabling the Church to fully address the real needs of its members," wrote Colm Holmes, chair of We Are Church International.

Cardinal Gerhard Müller, prefect emeritus of the Congregation for the Doctrine of the Faith welcomed Querida Amazonia, challenging the hermeneutic of conflation: "The Pope does not draw from [the final synodal document] any dramatic and disconcerting conclusions."

"It is to be hoped," wrote Müller, "the interpreters of this document will refrain from unnecessary harshness and take up the concerns of the Holy Father like true sons and daughters of the Church in a spirit of agreement and collaboration."

According to the canon 343: "It is for the synod of bishops to discuss the questions for consideration and express its wishes but not to resolve them or issue decrees about them unless in certain cases the Roman pontiff has endowed it with deliberative power, in which case he ratifies the decisions of the synod."