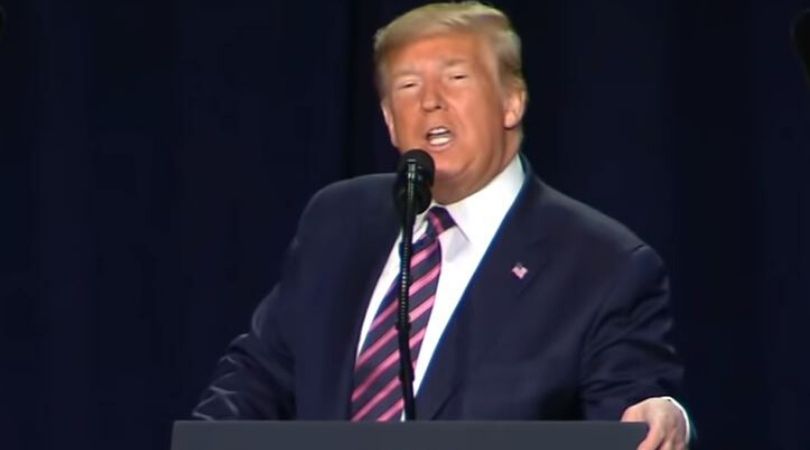 'America is a nation that believes in redemption'

WASHINGTON (ChurchMilitant.com) - President Trump held up a newspaper with the headline "Acquitted" in front of House Speaker Nancy Pelosi (D-Calif.), with applause and laughter from 3,500 guests from more than 140 countries gathered at the National Prayer Breakfast in Washington, D.C. on Thursday.

But the president's remarks at the 68th annual faith-filled event transcended mere political commentary and were studded with remarks on religious liberty, prayer in public schools, renewal of national spirit and persecution of Christians.

Trump's remarks were greeted with applause, especially those regarding prayer in public schools and the sanctity of life.

"We come together as one nation, blessed ... and worship together in peace," he began.

Referencing the Democrats' attempt to impeach him, Trump said he has endured "a terrible ordeal" perpetrated by "dishonest and corrupt people" who "put themselves ahead of our great country."

"I don't like people who use their faith as justification for doing what they know is wrong," said Trump, in a dig at Sen. Mitt Romney (R-Ut.), who on Wednesday voted to impeach the president.

"Nor do I like people who say 'I pray for you' when I know that isn't so," he added, slamming Pelosi, a pioneer of the failed impeachment attempt.

In America we don't punish prayer. We don't tear down crosses. We don't ban symbols of faith ... we raise our sights to the glory of God.

"They have done everything possible to destroy us and by so doing have very badly hurt our nation," said the president. "So many people have been very hurt and we can't let that go on."

He segued to applaud the "great American comeback," housing "religious freedom" within that topic.

The president noted that the challenges Americans have faced and the heights that have been reached throughout history were accompanied with "unwavering belief that God was with them." He likened the small chance of victory surrounding the challenge of Washington and his men at Valley Forge to what he experienced preceding his 2016 election.

"To protect faith communities," he said, "I have taken historic action to defend the religious liberty including the Constitutional right to pray in public schools."

"I've also taken executive action to stop taxpayer dollars from going to go to universities that spread the poison of anti-Semitism and bad things about Christianity," he added.

The current administration is also upholding the "sanctity of life," the president continued, taking the opportunity to remind attendees to get out and vote on Nov. 3 because "a lot of people out there are not liking what we're doing."

He spoke of "bringing hope to many communities" in terms of work opportunities and giving former prisoners a second chance, stating: "America is a nation that believes in redemption."

I'm trying to learn. It's not easy ... When they impeach you, it's hard to like them, but I'm doing my best.

"We are renewing our national spirit," he said.

He also talked about protecting persecuted Christians all over the world, citing examples in Iran and Venezuela.

Trump brought smiles and laughter to the attendees when he alluded to forgiveness: "I'm trying to learn. It's not easy ... When they impeach you, it's hard to like them, but I'm doing my best."

Trump ended by saying let us "ask our Father in Heaven to guide our steps, protect our children and bless our family. And with all our heart, [let us] embrace the eternal truth that every child is made equal by the hand of Almighty God."

Speaker of the House Nancy Pelosi spoke before the president, praying for the "poor and the persecuted," including Muslims, Buddhists and Uyghurs: "Let us pray ... that we treat everyone with dignity and respect," Pelosi said. "We pray that moral clarity of faith moves us to demand justice for those who are suffering and we pray that commercial interests never blind us to the ongoing human rights struggle fought by so many throughout the world."

House Minority Leader Kevin McCarthy also prayed, asking "the Good Shepherd to bring us together as a flock" and "to guide us out of tearing divisions" and "lead us into unity to do the people's business." He prayed that the Lord would make all leaders in the room, in the United States and throughout the world to be "Good Shepherds" of their flocks.

Speaking with Trump on his right and Pelosi on his left, special guest speaker, Arthur Brooks, president of the American Enterprise Institute and author of Love Your Enemies, spoke about loving those we disagree with.

Brooks said that he believed that current crises in the United States — and throughout the world — represents the "greatest opportunity for people of faith" to overcome "contempt and polarization" and to bring people together.

"Love your enemies ... and sometimes when it's too hard, ask God to help you fake it," Brooks said.

Trump, in his speech, said he didn't know if he agreed with Brooks, but added, "I loved listening to your speech."

The National Prayer Breakfast started in 1953 when Billy Graham invited former President Dwight Eisenhower to join lawmakers for a morning meal "in the spirit of Jesus," and every president since has spoken at the gathering organized by The Fellowship Foundation, a nonprofit that brings leaders together around faith.