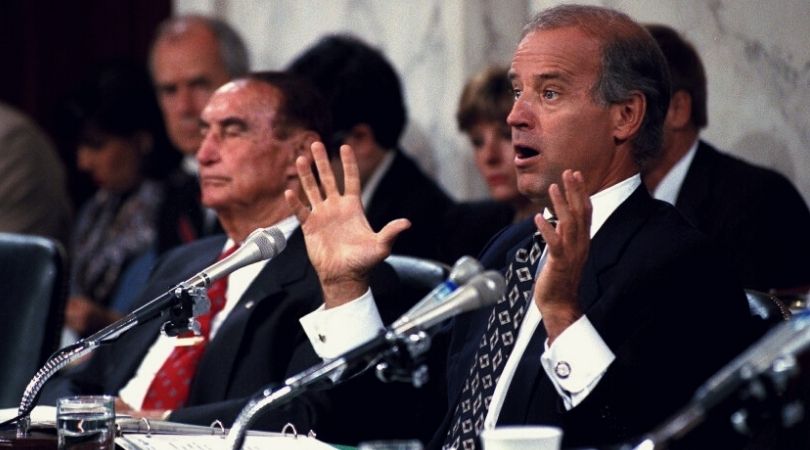 WASHINGTON (ChurchMilitant.com) - Joe Biden mutated Senate hearings of Supreme Court nominees into a "blood sport," according to a Washington attorney who has worked on three Senate confirmations.

"As we head toward Judge Amy Coney Barrett's Senate confirmation hearings on her nomination to the Supreme Court, let's not forget that former Vice President Joe Biden is responsible for turning the high court confirmation process into a blood sport driven by character assassination," attorney Mark Paoletta commented on Thursday.

"Biden, now the Democratic presidential nominee, claims to work across the aisle with Republicans," Paoletta observed. "But his vicious conduct as a Democratic senator from Delaware in the confirmation hearings for Robert Bork (whose nomination was not confirmed) and now-Supreme Court Justice Clarence Thomas is a permanent stain on the Senate's reputation."

Paoletta observed that Biden's running mate, Sen. Kamala Harris, behaved in like manner during the 2018 Senate hearing for Brett Kavanaugh, smearing the now-Justice's reputation with "baseless and absurd allegations."

We are fortunate that neither Biden nor Harris is chairing the confirmation hearings scheduled to begin Oct. 12.

"We are fortunate that neither Biden nor Harris is chairing the confirmation hearings scheduled to begin Oct. 12 in the Judiciary Committee for [Amy Coney] Barrett, who is currently a judge on the 7th U.S. Circuit Court of Appeals and was nominated to the Supreme Court Saturday by President Trump," continued Paoletta.

Paoletta recalled President Ronald Reagan's 1987 nomination of U.S. Circuit Court of Appeals Judge Robert Bork to the Supreme Court, noting Bork "was considered one of the finest legal scholars and well-regarded public servants in our country, earning an extremely well-qualified rating from the American Bar Association."

"But the left — led by Sen. Ted Kennedy, D-Mass., and Senate Judiciary Committee Chairman Biden — decided to savage Bork through character attacks and false claims in a craven and unprincipled tactic for political gain," he explained.

Biden behaved even worse with the smear campaign against now-Justice Clarence Thomas in 1991, according to Paoletta.

"Thomas seemed on his way to Senate confirmation with more than 60 votes when, prodded on by Democratic staff, Anita Hill lodged last-minute, baseless accusations of sexual harassment against Thomas, which were leaked by these same Democratic staffers," Paoletta recalled.

Paoletta explained that "Biden used his position as Judiciary Committee chairman to execute the character assassination," allowing "Hill's lawyer to sit in on her key corroborating witness interview, bending the rules to help hype Hill's salacious lies by trying to selectively stifle what senators could discuss."

Paoletta was with Justice Thomas the night he was confirmed when the phone rang.

Biden used his position as Judiciary Committee chairman to execute the character assassination.

"It was Joe Biden calling to congratulate Thomas on getting confirmed, telling him not to let this get him down and that Thomas had many years to show the American people what he was — a person of character," he recollected. "Does that sound like a man who believed Anita Hill's allegations?"

"I was a young attorney at the time and had worked closely with Thomas through that awful ordeal, and I could not believe that Biden had allowed this circus — this "national disgrace," as Thomas called it — to happen when Biden never believed Anita Hill," he added.

"The week of hearings in 1987 showed me Joe Biden's partisanship and pragmatism," she noted. "Most people don't remember the hearings on Robert Bork for nomination to the Supreme Court, but I do."

"I was there during the four months of vicious political campaigning against this judicial nominee, my husband, and in the Senate hearing room as then-Sen. Biden presided over a rigged hearing full of an unprecedented level of lying and distortion of a man known for his integrity and judicial wisdom," she continued. "Democrats flagrantly lied about Bob's record of opinions."

Biden was running for president at the time.

"On day four of the hearings Sen. Biden was accused of plagiarism and had to drop out of the presidential race," Bork remembered. "In the course of one week Sen. Biden orchestrated a vicious lying assault and was caught passing off someone else's words as his own."

We will all have tears in our eyes if Joe Biden is elected president.

"After Bob left the court in 1988 to devote himself to writing and teaching, Democrats would often come up to him to apologize for the way the Democratic politicians treated him and would leave with tears in their eyes," she shared. "We will all have tears in our eyes if Joe Biden is elected president."

Robert Bork died a Catholic, having credited his wife for his conversion.