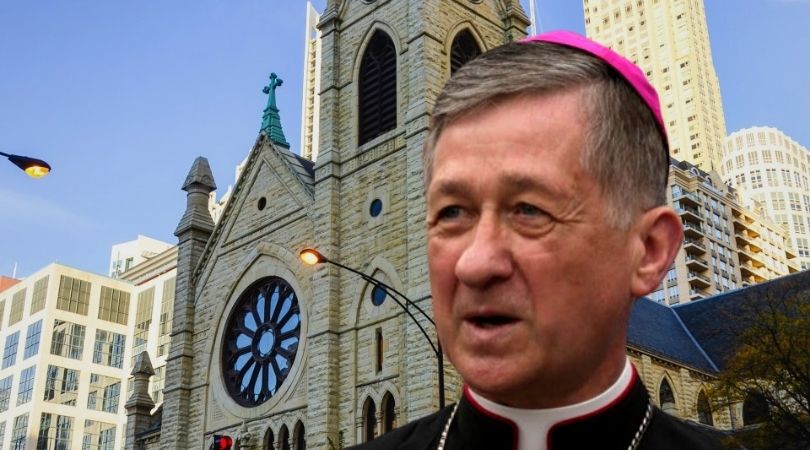 A March 3 press conference invites the faithful to engage with an effort to keep open Catholic parishes in or near Chicago despite efforts within the archdiocese to merge or close them.

An activist group calling itself "Saving Our Catholic Churches" will gather with media and concerned Catholics at 11 a.m. CT in front of the shuttered All Saints-St. Anthony's church, 518 W. 28th Pl. in Chicago's Bridgeport neighborhood.

The group's effort is not to save the parishes from Chicago's mayor, Lori Lightfoot, nor even from some angry mob of atheists, but from Cdl. Blaise Cupich.

The activists, who call themselves the "God Squad," say that 25 parishes and churches targeted for closure in the archdiocese of Chicago have taken their fights to Vatican courts as part of a canonical law process designed to protect the rights of the faithful. Representatives from those parishes will attend the press event to discuss the steps they've taken or are planning.

The activists say that canon law has been ignored as part of a "money grab" by the archdiocese that is shuttering parishes — even those it calls financially and socially vibrant — or in some cases, merging them with parishes laden with debt.

The group says that while canon law allows the faithful to "take their churches into their own hands" to raise funds and "care for them as Catholic sacred spaces," the archdiocese is either not informing them of their canonical rights or deliberately concealing these rights when asked about them.

The archdiocese's disinformation' campaign ... precludes interested faithful from mounting 'a valid challenge to the closure of their parishes ... through canonical appeal.'

The archdiocese's "disinformation" campaign, the group says — once the church is "closed" — precludes interested faithful from mounting "a valid challenge to the closure of their parishes through the filing of a canonical appeal."

Among their concerns, the group says the archdiocese is:

The activist group says that despite faithful parishes raising $423 million for a $350 million "capital and endowment" campaign in the archdiocese, of which 65% is already in hand, even parishes that have used their own portion of the funds raised to fix roofs, furnaces and other projects have had their parishes closed or targeted.

An aerial tour of St. Adalbert's church, which is on the hit list

One parishioner, whose parish invested $350,000 in improvements that were expected to last 30 years, told the Chicago Tribune that despite raising over $1 million for the archdiocesan campaign, "We learned in November 2019 that our parish and church would be closed. It was no longer ours — just property of the archdiocese to be sold like so many other historic churches condemned to the same fate."

He added that these actions "have been like a wrecking ball on our faith community. So many of our parishioners have decided to leave the Catholic Church entirely,  never again feeling like they can trust the leadership of this archdiocese."

A fellow parishioner commenting on the situation on Facebook said, "I believe approximately $600,000 had been raised to expand the school, and the archdiocese canned the project and kept the cash."

Dozens of Chicago-area Catholic churches are slated for closure under Cupich's "Renew My Church" campaign.

Parishes and churches that have filed canonical appeals include:

According to the protest group's Facebook page, a buyer offered the archdiocese its full asking price for the church and grounds of All Saints-St. Anthony's parish, where the media event will occur. The plan included maintaining the church as a Catholic oratory, and the new owner would have used the attached rectory for an art studio. The buyers' plan was to offer local artists a place to do their work.

This would have been a wonderful addition to the local community, but the archdiocese rejected this full-price offer. This decision [by Cdl. Cupich] defies logic. We can only surmise that the archdiocese of Chicago objects to the existence of Catholic sacred spaces that it no longer wishes to maintain. This is completely against canon law, which gives "first priority" to a Catholic entity that wishes to maintain the church as a Catholic sacred space and who is willing to take responsibility for its perpetual care.

In another case — in the Joliet diocese — St. Joseph Catholic Church in Caybery, Illinois is in immediate danger of demolition despite an offer to purchase the church from the diocese as well as a donor willing to fund all repairs.

Leading the "Saving Our Catholic Churches" initiative is Julie Sawicki. She works closely with Brody Hale, a practicing Massachusetts civil attorney and canonical advisor who, as part of his work as president of the St. Stephen Protomartyr Project, fights needless Church closures worldwide. Having stopped the wrecking ball in other dioceses, Hale says Catholics can establish nonprofits to raise the funds to preserve their churches.

He says his project aims to "apply pressure to bishops across the United States to stop treating churches like 'poker chips in Vegas' and to start treating them like the sacred spaces they are."

The "God Squad" is establishing a legal fund for canon attorneys in Rome, which are needed if and when an appeal reaches the Vatican's higher court, the Apostolica Signatura.

Catholics in other states have already stepped forward to aid in research, communication via social media and other tasks supporting the effort. Additional help from volunteers is needed and welcome, the group says.

"One of the paradoxes of history is that the Roman Catholic Church thrived during the Great Depression and in the days of Al Capone, but if Cdl. Cupich gets his way, in no time flat during his tenure as archbishop, there will not even be a vestige of Catholicism left in Chicago," said one concerned Catholic.