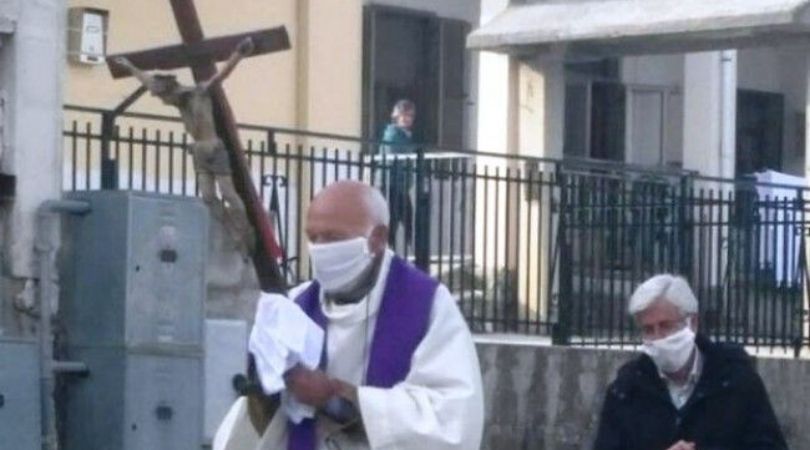 ROME (ChurchMilitant.com) - A priest who was fined €400 ($432) for processing with a "miraculous crucifix" through the picture-postcard town of Rocca Imperiale in southern Italy is refusing to pay the penalty in protest against the state's repressive measures to "punish the Church."

Father Domenico Cirigliano, 76, says he was doing what every parish priest overseeing Rocca Imperiale in the province of Calabria has done for the last 300 years: re-enacting the procession that has been the town's tradition since March 30, 1691 — the date on which the crucifix is said to have bled before the people of the town.

The priest insists he was not violating the health restrictions as he was walking on his own with the crucifix and with a protective mask. A single parishioner was following at the legally stipulated distance.

But last Monday, on the town's holy day commemorating the feast of the miraculous crucifix, the parish priest of the Church of the Most Holy Annunciation was arrested by the Italian paramilitary police and slapped with a penalty of €400, which could be reduced to €280 ($302) if paid within five days.

"I will not pay it, simple. I didn't even sign the [police] report," Fr. Cirigliano told Italian newspaper La Nuova Bussola Quotidiana.

The priest said that he immediately reported the matter to Bp. Francesco Savino.

Cirigliano affirmed that he was not prepared to sacrifice the procession his people "have been conducting for more than three centuries without skipping a year." A few days before the event, he informed his parishioners that he "would pass through the main streets of the town offering a blessing with the crucifix."

"The youth helped me with Whatsapp and some publicity was created. People were happy, they opened the windows and doors of their homes," he adds.

On the day of the procession, Cirigliano says a boy from the parish phoned him at noon saying that a policeman was warning the priest "not to go ahead with the procession."

The priest explained that it was not the usual procession, he would be alone, with only one parishioner walking at a distance with a mask. He also said that his goal was to protect the city from the coronavirus.

However, at 5 p.m. he was accosted by two carabinieri who asked him for documents. "I said that my hands are busy because I am holding the crucifix, I can't put it on the ground. Take them yourself."

The paramilitary police rummaged through the priest's pockets and the procession continued with people greeting the crucifix with kisses from a distance and praying.

Don Domenico made a beautiful gesture. He acted like Pope Francis. Both violated rules to go to pray and ask God to stop this pandemic.

Cirigliano was shocked to find the carabinieri waiting for him in front of the church after the procession. "They were waiting for me to return my identity card and notify me of the penalty," he says. "I said I wouldn't pay. I didn't sign the report and they left it on the church table."

The police report against the priest states that his procession was "not motivated by a work situation or by situations of necessity or for health reasons," but that he "was on public streets intent on holding a religious demonstration/event in a public place."

The report describes how the priest "carried out a procession exposing the crucifix in which another person took part" and that the religious function "on foot has affected all the streets of the historic center of Rocca Imperiale."

According to Corbelli, "the Holy Father also acted in violation of the rules and processed on foot during the same period through the streets of Rome to pray in the Basilica to ask Christ and the Madonna to stop the terrible epidemic."

"This is why I express all my solidarity to Don Domenico, I share his act of faith and I say that ideally, it is as if I too had participated in his procession," remarked Corbelli, adding:

I certainly don't mean that the population should have followed him. Absolutely not. There is a government decree and it must be respected. But there are also exceptions that need to be considered. Especially when these are carried out by a man of the Church and in a true, great gesture of faith and prayer. For this reason, fining Don Domenico was, in my opinion, a mistake. It means fining, arresting the Faith.

"Don Domenico made a beautiful gesture. He acted like Pope Francis. Both violated rules to go to pray and ask God, that same Crucified One, to stop this pandemic. I hope and ask that this fine be canceled by the appropriate authorities," the activist commented.

For now, let's accept this test sent by the Lord.

Italian Catholic sources have told Church Militant they are gravely concerned by the arbitrary and tyrannical ways the lockdown is being implemented.

Sources said that they could go to a tobacconist to purchase cigarettes or a wine shop to buy a case of wine, but could not stop at a church to spend time in adoration before the Blessed Sacrament if it was not the person's parish church or en route to the person's place of residence.

Catholics particularly lamented the "stunning silence" from church authorities who had "capitulated wholesale and gone the extra mile to appease Caesar."

Father Cirigliano agrees: "Here everyone interprets the norms as he wishes and believes he is Father God. For now, let's accept this test sent by the Lord, then let's see what the bishop will achieve."

"But the bitterness is so great," he laments. "I took the crucifix out to bless the whole city, all the inhabitants of Rocca Imperiale, including the carabinieri and the mayor. It is the cross that must protect us."