FALL RIVER, Mass. (ChurchMilitant.com) - While abusive priests are kept in positions of authority, modernist clergy and prelates defame and use public outcry to sanction orthodox priests.

Father John (Jack) Harrington wants to return to his priestly ministry in the diocese of Fall River, Massachusetts, but is being blacklisted by a group of clergy linked to an abusive priest inside the local seminary. Harrington believes he is being punished by a "cabal of homosexual bishops and priests" and stripped of his ministry and clerical garb for reporting sexual harassment he endured while in St. John's Seminary in Brighton, Massachusetts.

"It is the result of my having had a confrontation with the homosexual clerics in the beginning as a seminarian and then, subsequently, after my ordination as a priest," he said.

Harrington had his first hearing in the Norfolk County Superior Court on March 7, saying, "I hope the judge will grant a motion for discovery so we can show the defendants did indeed conspire to defame me."

Harrington claims that Bp. George Coleman punished him by removing him from his assigned parish, withdrew his priestly faculties and evicted him from the diocese to silence him. Later, after publishing another false accusation about Harrington, Bp. Coleman forbade him from wearing his priestly collar.

"All of these actions are in keeping with the homo-lobby's agenda to weed out orthodox priests from the Catholic Church," Harrington said.

Harrington told Church Militant in an exclusive interview that he believes there are other men who were chased out of seminaries or persecuted by the gay lobby in the clergy and hopes his coming forward can help the Church. "It's a very powerful gay lobby out there," Harrington notes. He told Church Militant he agrees with Fr. Dariusz Oka who spoke out against the gay mafia in the church, saying, "To refuse to confront it is a sin of omission."

Claiming the 11 men named in the civil suit conspired to defame him, Harrington hopes that he can prove their actions were a result of his insistence that an abusive dean, Fr. John Farrell, be removed from the seminary.

"The evidence from research about homo men in church is that the homosexuals know and help support each other," Harrington said. "They cover one another's back. And if you challenge one of them, they come to the aid of the other person by intimidating the victim into silence."

While Harrington was in his first year at St. John's Seminary, he and an entire class of seminarians were scandalized by Farrell, the academic dean at St. John Seminary at the time, when he described a graphic sexual encounter he had as a come on to the entire class of pre-theologians.

Harrington also claims Farrell inappropriately touched him twice. "I wasn't the only member of the class that was hit on. Another student I know also reported Farrell to seminary officials," Harrington said.

Nothing was done to him, no apology, nothing.

Harrington followed the chain of command, reporting the incidents to the rector and then to Cdl. Bernard Law and Auxiliary Bp. Robert Banks. None of these resulted in any actions to remove Farrell from his position as academic dean. "After I reported Farrell in the seminary," Harrington said, "Cdl. Law allowed him to stay in the seminary even though he knew he was an active homosexual."

"Nothing was done to him, no apology, nothing," Harrington said.

Harrington attempted to endure the conditions at the seminary but left in 1991, telling Church Militant he was "feeling increasingly uncomfortable around Farrell and pressured by the gay community of seminarians and faculty that he was no longer welcome."

Over a decade passed and Harrington couldn't resist the call to the priesthood and reapplied to St. John's Seminary in 2002. The vocations director, the late Fr. Robert Flagg, sent Harrington to Kevin Donnelly, an on-staff church psychologist, for an evaluation. Donnelly interviewed Fr. Harrington four times and produced what Harrington says is a "scurrilous" 13-page report that was used to deny Harrington admission to the seminary.

Harrington told Church Militant that Donnelly's report was "incredibly insidious," explaining that it was "written in such a way that no other seminary would want to accept me."

"This form of ideological discrimination is a common practice used by the homo-lobby to screen out orthodox men from the priesthood who don't share their agenda to redefine Church ministry," Harrington said.

Although Richard G. Lennon, auxiliary bishop of Boston and rector of St. John's Seminary, agreed that it was biased against Fr. Harrington, he refused to reconsider Harrington's admission status. Later that year, Harrington applied and was accepted to Mount St. Mary's Seminary in Emmitsburg, Maryland. Cardinal Sean O'Malley, the bishop at the time, accepted Fr. Harrington after he successfully completed another psychological evaluation.

Finally ordained on June 5, 2004, Harrington was assigned as a parochial vicar to Msgr. John A. Perry, pastor at St. Patrick's parish in Falmouth, Massachusetts.

A mere six months later, Fr. William M. Costello, pastor of St. Anthony parish in East Falmouth and a known homosexual, approached Perry with an accusation that a parishioner complained Fr. Harrington was stalking her son who was enrolled in St. Patrick's religious education program but would not tell Harrington the name of his accuser.

Without discussing the accusations with Harrington, Costello and Perry spread the story of the stalking accusations among the religious education directors. Parishioners began treating Harrington with hostility, and they even vandalized his ordination chalice that was locked in the sacristy.

Perry also threatened Fr. Harrington with a transfer, prompting him to speak out from the pulpit in defense of his good name, to ask for prayers and for the right to know who accused him.

Coleman reacted by removing Harrington from St. Patrick's and placing him in the priests' hostel in Fall River. Harrington felt Bp. Coleman protected Costello by forcing him into silence.

Eventually, Harrington learned the names of the people Perry and Costello claimed made the stalking accusation. Speaking with them directly, he obtained a signed affidavit from the mother, clearly stating she never accused Harrington of stalking her son. She also sent a letter to Bp. Coleman that was co-signed by her sister attesting to Fr. Harrington's innocence.

Harrington also spoke with Michael LeBrun, the other parishioner, who spoke directly to Bp. Coleman telling him that neither he nor the boy's mother, ever accused Harrington of stalking her son as alleged by Costello.

Harrington explained, "Costello had no motive to fabricate this about me other than the real possibility that he was defending his former gay-friendly professor Jack Farrell" — the man who sexually harassed Harrington years earlier.

Later in November 2006, Coleman punished Harrington again, sending him a decree reading, "to protect the Catholic community, I hereby place you under obedience to cease all exercise of clerical ministry and to refrain from residing in any building or on any property of the diocese of Fall River."

Harrington is at press time not allowed to celebrate public Masses, hear confessions or exercise his faculties as a priest.

Harrington initiated a canon lawsuit against Perry and Costello. After it was clear the diocese was not cooperating with the Vatican, Harrington sued in civil court.

Although his suit was denied for missing the statutes of limitations, he was vindicated by the judge who wrote in the decision, "It is undisputed that Harrington never stalked the Williams' boy, that the statements when made by both defendants were slanderous, harmful and devastating to the plaintiff's reputation."

Also during that time, in 2012, Costello was relieved of his administrative duties from Our Lady of Mount Carmel Church after being criminally investigated by the Rhode Island State police for reportedly giving parish money to a young man he with whom he was having a sexual relationship. The statement from the Fall River diocese reads, "The diocese hastens to assure people that the investigation does not involve the abuse of minors."

Costello's troubles weren't enough to convince Bp. Coleman that Harrington was falsely accused. In fact, in 2014, Harrington was "shocked" when he received a precept from Coleman ordering him to stop wearing his clerical garb and to "cease presenting himself publicly as a priest."

"That Bp. Coleman used the power of his office to issue a decree which published a false allegation which he used to strip me of my right to wear my priestly garb harms not only me but harms the mission of the Church," Harrington said. "The exercise of rights and the fulfillment of duties serves the communio of the Church and guarantees that it fulfills its divine mission on earth."

Bishop Coleman's precept was based on a complaint from Fr. Sean Connor, the pastor of Sacred Heart Church in Weymouth, Massachusetts, where Harrington occasionally spent time in the adoration chapel when he went to visit his mother. Connor reported to Fr. Kevin Sepe, the former episcopal vicar of parish life and leadership of the archdiocese of Boston, that Harrington was hanging around the church and probably hearing confessions and providing spiritual direction without his faculties, which could do harm to the faithful.

In keeping with the "sinister stalking allegation fabricated about me earlier by Costello," Harrington said Connor's affidavit portrays him not as a priest at prayer before the Blessed Sacrament but as a rogue priest preying on naïve and vulnerable members of the faithful.

Sepe reported to Father Gregory Mathias, vicar general of the Fall River Diocese, that pastors in the Braintree area were complaining about Harrington disturbing the parishioners. Bp.Coleman used this allegation to strip Harrington of his clerical garb. Harrington argues that by publishing this false allegation in the decree, he was defamed.

"It is telling that neither Coleman nor Sepe cite the false allegation in their respective affidavits signed under pain and penalty of perjury," Harrington notes.

"All I wanted was for Coleman to acknowledge the truth," Harrington said. "So what I hope comes from it is simply just the truth comes out."

Neither Connor nor Perry would offer comments and the diocese of Fall River told Church Militant in a statement:

The matters raised by the Rev. John Harrington in a news conference last week are currently the subject of pending litigation. The parties involved in that litigation deny Fr. Harrington's claims and are vigorously defending the lawsuit. The Fall River diocese believes that the lawsuit is without merit and that the adjudication of the case in the court will support that position. 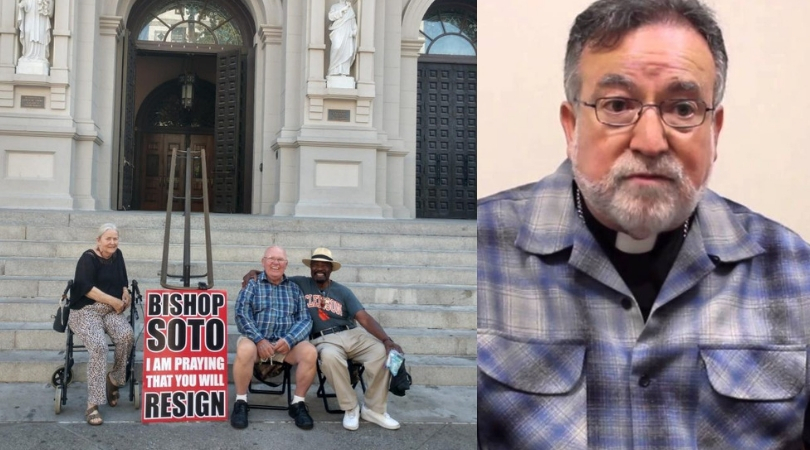