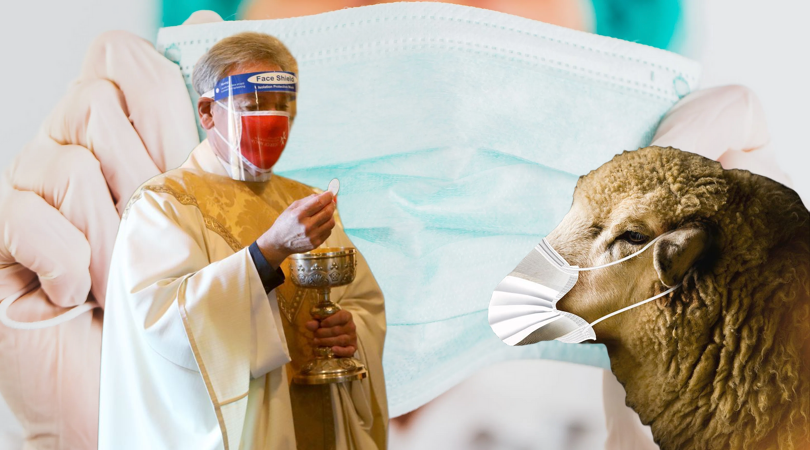 ROME (ChurchMilitant.com) - Priests in Italy are forcing churchgoers to don face coverings even though the government and the Italian Episcopal Conference (CEI) ruled that masks are no longer mandatory at Holy Mass, starting May 1.

The CEI continues to recommend the use of so-called "respiratory protection devices," but there is no legal requirement for parishioners to wear them.

In a letter to bishops, CEI president Cdl. Gualtiero Bassetti states that "the use of masks remains, strictly speaking, recommended in all activities that involve the participation of people in indoor spaces, such as celebrations and catechesis."

However, according to Bassetti's letter, FFP2 masks continue to "remain mandatory for events open to the public that take place indoors in places similar to cinemas, concert halls and theatrical halls."

Priests are using the weaponized ambiguity of the CEI instruction to give parishioners the impression that churches are akin to cinemas and so bully them into wearing masks, several Catholics from different parts of Italy told Church Militant.

The Italian bishops' daily publication, Avvenire, notes that "the use of masks is no longer mandatory," however, "the use of face protection devices is recommended during liturgies" as "a reminder of the sense of responsibility and respect for attention and behavior [needed] to limit the spread of the virus."

Walk through Rome, and you will see priests and nuns are the most compliant.

Avvenire also urges congregants "to avoid gatherings, especially at entrance, exit and among the people who, possibly, follow the celebrations standing" (not seated in pews), even though "the obligation of interpersonal distancing of one meter in the pews has lapsed."

Holy water fonts are to remain empty and worshippers are asked to sanitize their hands at the entrance of the churches and avoid shaking hands or embracing at the kiss of peace, the bishops' media adds.

While masks are no longer required for shops, supermarkets, hotels, bars or restaurants, employers may mandate face coverings for their employees.

On Sunday, Church Militant's Rome correspondent was told that he would not be given Holy Communion if he stood in front of the priest without a mask.

Before the evening Mass, Fr. Gianfranco Corbino, parish priest of St. Melania the Younger, Rome, approached this reporter, who was seated in the last pew of a very large church, and told him he had to wear a mask.

The universal use of masks may have had harmful consequences.

When this reporter told Fr. Corbino that the government's latest decree did not require masks at Mass and that the CEI recommended — but did not compel — masks, the priest continued to insist that masks had to be worn.

Even after Fr. Corbino was shown the decree on a mobile phone, he continued to insist on mask wearing and threatened to refuse to administer Holy Communion to those not wearing masks during reception of the Sacrament.

This reporter refused to wear a mask during the service but donned one for a few minutes while receiving Holy Communion, out of respect for the health concerns of the priest. Before the final blessing, the priest told the congregation that the CEI had "strongly recommended" wearing masks and compared the Church to cinemas, where masks are still compulsory.

During the Eucharist at St. Melania the Younger, every one of the approximately 200 attendees was wearing a mask. Parishioners at Novus Ordo parishes also reported total conformity to the illegal requirements imposed by local parish priests.

Mass goers at the church of Sant'Agnese in Agone, the traditional site of St. Agnes' martyrdom, were told they would be refused entry without a mask. The Basilica of San Giuseppe al Trionfale has imposed similar restrictions.

But Catholics worshipping at traditionalist Latin Mass churches in Milan, Trento and Santissima Trinità dei Pellegrini Church in Rome reported that almost no one was wearing masks and clergy wore face coverings only while administering Holy Communion.

Church Militant spoke to two Italian priests who said that they were continuing to impose mask restrictions for "pastoral reasons."

"Most of our people are terrified of catching the virus, and we are doing our best to assure them that they will be protected when they come for Mass. We don't want to lose them," one priest said.

They wear their masks more religiously than cassocks or habits.

Both priests said they would expect congregants to follow their instructions and not challenge them, since the CEI had "strongly recommended" mask wearing.

But a senior director at a United Nations organization in Rome told Church Militant that the clergy were themselves the most terrified of the virus. "Walk through Rome on any day, and you will see priests and nuns who are the most compliant. It doesn't matter where they come from. They wear their masks more religiously than cassocks or habits," she said.

Meanwhile, in violation of government and CEI regulations, the archdiocese of Milan, under Abp. Mario Delpini, issued a decree mandating mask wearing during Eucharistic celebrations.

Delpini earlier slammed Catholics who warned that the pandemic may have been God's punishment. "It is a pagan idea to think God sends scourges," the prelate retorted.

Peer-reviewed studies have repeatedly demonstrated that face masks are not just ineffective against COVID-19, but are dirty, dangerous and dehumanizing.

The most recent study on mask-wearing, titled, "Correlation Between Mask Compliance and COVID-19 Outcomes in Europe," published in the Cureus journal in April, shows that "countries with high levels of mask compliance did not perform better than those with low mask usage."

On the contrary, "the moderate positive correlation between mask usage and deaths in Western Europe also suggests that the universal use of masks may have had harmful unintended consequences," the study concluded.