COMO, Italy (ChurchMilitant.com) - The illegal immigrant who murdered a pro-migrant Italian priest may have been associated with mosques or groups linked to radical Islam, Church Militant has learned.

Father Roberto Malgesini was given a hero's funeral Friday as the autopsy report revealed that 53-year-old Tunisian Muslim Mahmoudi Ridha had attempted to behead the priest.

Anatomopathologist Dr. Giovanni Scola concluded that the large wound in the neck appeared "to suggest an attempt at decapitation not completed due to the desire to resect the bony plane of the spine."

"The priest died like a dog, that was right," Ridha said Tuesday morning after he repeatedly stabbed 51-year-old Fr. Roberto Malgesini in Piazza San Rocco in the center of Como in the Lombardy region of northern Italy.

The only fallback position for those whose denial and willful ignorance is so implacable is to insist that Ridha is 'mentally ill.'

The Sharia scholar also pointed out that this term of abuse was not insignificant. Infidels are called "dogs" and the Qur'anic verse 7:176 says of the unbeliever: "So his example is like that of the dog: If you chase him, he pants, or if you leave him, he [still] pants. That is the example of the people who denied our signs."

"In Islamic parlance, 'dog' is used as the vilest of insults," he added.

An Italian linguist explained to Church Militant that the phrase was a malapropism and one would not use such an expression in correct Italian. "'Mal di testa' refers to a 'headache.' When we want to say someone is 'mentally ill' we say 'malata di mente.'"

"I am not sure if Pope Francis is being deliberately ambiguous or speaking poor Italian as he often does," the linguist noted. "Of course, he wouldn't like his pro-migrant, pro-Muslim narrative to be disrupted if the assassin were found to have jihadi motives."

Despite police reports categorically stating that the assailant had never suffered "certified psychological problems" and had no history of mental illness, Italian bishops, Caritas and the mainstream media unanimously diagnosed the killer as "mentally ill," Church Militant reported.

In Islamic parlance, 'dog' is used as the vilest of insults.

Robert Spencer, Islamic historian and author of The History of Jihad: From Muhammad to ISIS, lamented:

No one in the media, Church or police has tried to discover whether Islam's doctrine calling for violence against unbelievers may have been a motive for Fr. Malgesini's murder because all three are deeply committed to the idea that there is no such doctrine, and that Islam is a religion of peace that has nothing whatsoever to do with terrorism.

To acknowledge that Mahmoudi Ridha was motivated by Qur'anic passages such as "kill them wherever you find them" (2:191, 4:89, cf. 9:5) and "when you meet the unbelievers, strike the necks" (47:4) is inconceivable to them. They either don't know that such passages exist, or they are certain that no Muslims today take them seriously or would ever consider acting upon them. The only fallback position for those whose denial and willful ignorance is so implacable is to insist that Ridha is "mentally ill."

The region where the killing occurred, however, has deep ties to terror.

Francesco Maggio, expert in interreligious relations with Islam for Italy, confirmed to Church Militant that Ridha may have been radicalized at one of the mosques in Como or Milan.

Former interior minister Matteo Salvini had specifically instructed the police to spy on the Como mosques and the investigators, in turn, had agreed that Como was a hotbed of jihadi proselytism.

The hardliners give an impression of being moderate Muslims by smiling and attempting to cope with the sensitivities of the local people. But the Lombardy region is a hornet's nest of militant Islam in Italy, as is Emilia Romagna, Campania, Piedmont, Veneto and Toscana.

There are three mosques and three Islamic cultural centers in Como and one of them preaches a brand of Salafist Islam. Many Muslims in this region have been outraged over a number of years because the government has not given in to their demands.

Out of the thousand-odd illegal mosques all over Italy, there are over 75 irregular "prayer centers" in Lombardy alone.

In 2005, Tunisian Litayem Amor Ben Chedli was expelled from Como for his jihadi activities. Chedli was the Como Islamic Cultural Association's vice president. Several Tunisians have been deported over the last 10 years for links to terrorism.

According to Milan-born Dr. Lorenzo Vidino, Director of the Program on Extremism at George Washington University, radical Islamic Cultural Institute affiliates "established or took over mosques in other Lombard cities such as Como, Gallarate and Varese."

The Lombardy region is a hornet's nest of militant Islam in Italy, as is Emilia Romagna, Campania, Piedmont, Veneto and Toscana.

But Vidino also clarified that there need not be a connection between a radicalized Muslim and a local radical Italian mosque, and internet radicalization was all too common.

Police have now transferred Ridha from Como prison for fear of retaliation by the inmates, many of whom loved Fr. Malgesini.

After first confessing to the murder, Mahmoudi has now changed his version in prison and retracted his confession claiming: "It wasn't me. I injured my hand by myself."

Mainstream media, some observers say, are using the new version to establish their initial hypothesis that the illegal migrant may have been mentally ill after all.

According to an initial reconstruction, Mahmoudi set a trap claiming to have a toothache and when Fr. Malgesini showed up at around 7 a.m. in Piazza San Rocco, the assailant stabbed the priest from behind.

At Fr. Malgesini's Memorial Mass on Saturday, Papal Almoner Cdl. Konrad Krajewski represented Pope Francis and commended the slain priest as a martyr who, in the words of Jesus from St. John's gospel, "died to save his friends." 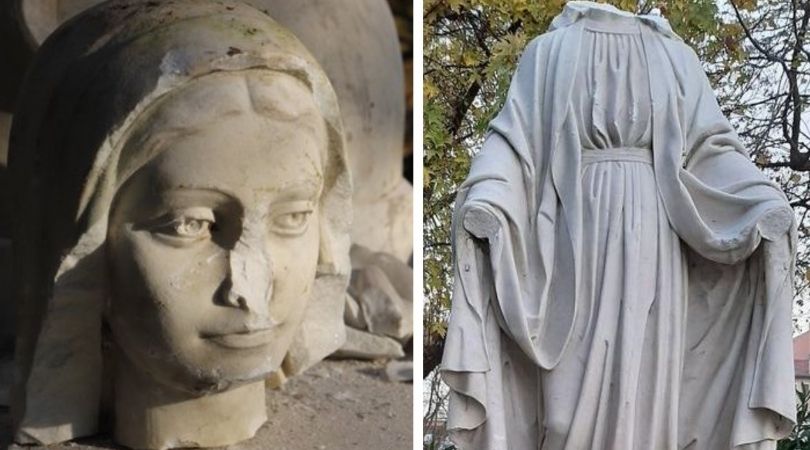