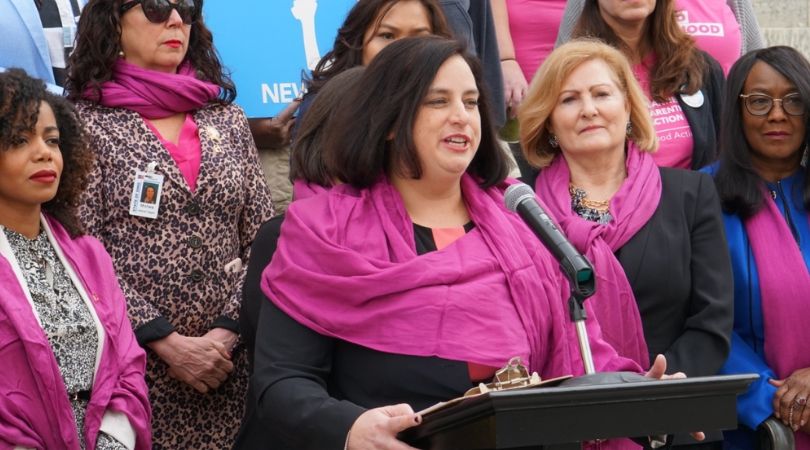 COLUMBUS, Ohio (ChurchMilitant.com) - A faithful pastor in Ohio canceled a mental health seminar scheduled at his parish after learning the event was being coordinated and advertised by a pro-LGBT and pro-abortion state lawmaker with a 100% score from NARAL Pro-Choice America.

"On Friday morning [Jan. 3], just about 10 minutes before I was to preside at a funeral Mass, I took a phone call from the vicar general of the diocese of Columbus, Msgr. Stephan Moloney, who was calling me on behalf of Bp. Robert Brennan," said Fr. Summers, who spoke with Church Militant.

"Monsignor inquired about the scheduled workshop and the advertised moderator, Beth Liston," he added.

Father Summers had never heard of Rep. Liston: "I had to look at a parish calendar to identify the date of the program, and then asked Monsignor to repeat the name of the person at issue — a name with which I was unfamiliar."

Once learning about Rep. Liston and her public opposition to Church teaching on a host of topics, Fr. Summers assured Msgr. Moloney the event would be canceled.

"I am a man of the Church," said Fr. Summers, adding: "I am an obedient servant to my bishop and the people of God."

A graduate of the University of Notre Dame, Rep. Liston has a clear and consistent record of supporting pro-abortion and pro-LGBT public policies, earning her endorsements and praise from Planned Parenthood, NARAL Pro-Choice America and Clinicians for Progressive Care.

In April 2019, Rep. Liston opposed the Heartbeat Bill prohibiting abortions once a fetal heartbeat is detected.

"Like a couple others just stated, I am Catholic, and the church where I was confirmed was actually the same one where I was married and where my kids received their first Communion," she said before the bill became law.

"Over the last few weeks, we've heard many opinions that this is a scientifically rational bill, that the presence of cardiac cell activity in a fetal pole within a cluster of cells smaller than a grain of sand is a medically excepted [sic] standard for defining human life," added Liston.

"And I can tell you that it is absolutely not," she said.

But contrary to Rep. Liston's assertion, pro-life advocates note, the biological reality is that a human "cluster of cells smaller than a grain of sand" contains its own unique human DNA, and as pro-life Virgina Republican Rep. Bob Goodlatte of Virginia has argued, "Each beating heart represents a unique human being with dignity and rights that deserves to be protected from the dangers of abortion."

I am a man of the Church ... I am an obedient servant to my bishop and the people of God.

"Requiring physicians to give patients inaccurate information is harmful to women and to Ohio. We should be focusing on policies that improve the health and lives of people in our state, rather than those that ignore real data in favor of an extreme ideology," concluded Rep. Liston.

Contrary to her assertions, abortion pill reversal is possible. According to the American Association of Pro-Life Obstetricians and Gynecologists, women who ingest the hormone progesterone after the first dose of mifepristone (the abortion pill), have, on average, a 55% chance of halting an in-progress chemical abortion.

Leftist political action committee Clinicians for Progressive Care (CPC) endorsed Liston's campaign and celebrated her victory in 2018: "Congratulations again to Beth Liston and Allison Russo, who fought their way to victory despite determined Trumpian gerrymandering by the Ohio GOP."

"Progressive healthcare," CPC declares, "demands and goes hand-in-hand with progressive politics in other areas, including but not limited to anti-racism (e.g., Black Lives Matter); refugee and immigration policy; disability rights; the rights of women, minorities, and LGBTQ; and criminal justice reform.

Rep. Liston is co-sponsor of HB-369, which is designed to "expand civil rights laws" to cover "sexual orientation." It states in one section: "Lesbian, gay, bisexual, and transgender individuals are too often the victims of discrimination. They may be fired from jobs, denied access to housing and educational institutions, refused credit, and excluded from public accommodations because of their sexual orientation or gender identity or expression."

*1/7/2020: This article has been updated to reflect new information about the priest's cancellation of the event.