Pro-abortion counterprotesters showed up, however, with the intention to disrupt and drown out the pro-life message. Church Militant was present at Planned Parenthood's Ferndale, Michigan location, where abortion advocates outnumbered pro-life people 22–1.

Their mockery of Christianity ranged from a man dressed like Jesus Christ carrying a feminist message to another carrying a sign proclaiming "Canonize Margaret Sanger."

While pro-life rally attendees occupied a median across the road from the PP location, more than 1,100 pro-abortionists crowded the walkway in front of PP and eventually made their way across the street into the pro-life crowd.

A Facebook post by Kelsey Green, counterprotest organizer, directed PP supporters to arrive early, saying, "[W]e want to ensure we take up as much space as we can before they arrive." She further directed, "Planned Parenthood asks that we do not engage with protestors [sic] and remain peaceful and respectful at all times."

They carried signs reading "I Support Planned Parenthood" and "Planned Parenthood Saves Lives." Pro-abortion protestors, however, did not "remain peaceful and respectful at all times." Their mockery of Christianity ranged from a man dressed like Jesus Christ carrying a feminist message to another carrying a sign proclaiming "Canonize Margaret Sanger."

Pro-life activists at the Detroit Planned Parenthood location saw as many or more pro-abortionists who put on vulgar displays, screamed at and shoved pro-lifers. 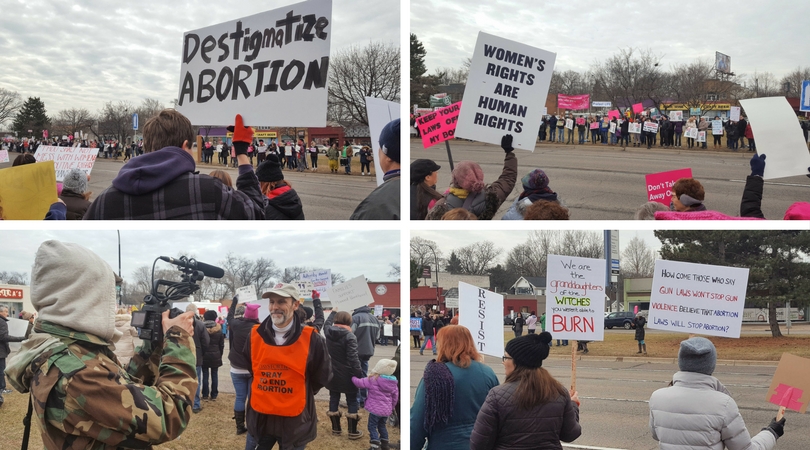 At several PP locations in the United States, the organization asked supporters to refrain from counterprotesting, maintaining it didn't want to give the pro-life cause more attention and that protests are bothersome to customers. "The quieter it is outside and the less people are engaging with each other the better it is for our patients," the abortion organization claimed.

The Detroit and Ferndale #ProtestPP demonstrations were organized by local pro-life warriors Lynn Mills and Richard Hass, both faithful Catholics. Although a deacon and some religious showed up at the location, there was no official support or presence from the archdiocese of Detroit.