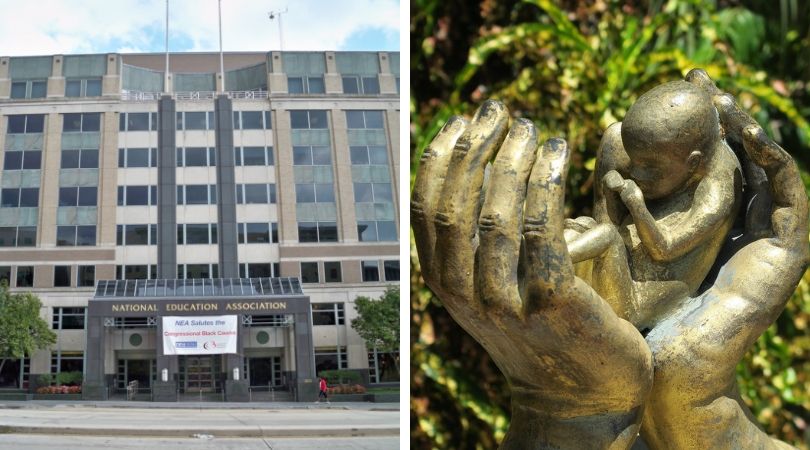 Through existing media channels, the NEA will honor the leadership of women, non-binary, and trans people, and other survivors who have come forward to publicly name their rapists and attackers in the growing, international, #MeToo movement.

Furthermore, the NEA will include an assertion of our defense of a person's right to control their own body, especially for women, youth, and sexually marginalized people. The NEA vigorously opposes all attacks on the right to choose and stands on the fundamental right to abortion under Roe v. Wade.

Here you have the largest union of educators in the country, basically affirming the destruction of those they claim to serve.

According to the text for New Business Item 56, the rationale for the amendment is based on the "most misogynistic forces, under Trump," that seek "to abolish the gains of the women's right [sic] movement."

Writing for National Review, Alexandra DeSanctis notes that the item "doesn't even make an attempt to articulate why the NEA has a stake in the abortion debate at all."

"It merely takes for granted that, as an influential left-wing organization, the group must necessarily champion the entire progressive agenda," she adds.

According to DeSanctis, if the National Rifle Association (NRA) were to take a strong stance that life begins at conception, then the group's opponents would vigorously criticize the NRA, presumably for being off mission.

"But on the Left, such 'allyship' among progressive interests is increasingly required as a measure of devotion to the greater cause," said DeSanctis.

Others have voiced strong criticism of the NEA's newly articulated pro-abortion stance.

Mary Pat Donoghue, the executive director of the Secretariat for Catholic Education at the U.S. Conference of Catholic Bishops (USCCB), said, "Here you have the largest union of educators in the country, basically affirming the destruction of those they claim to serve."

"That tells me that the child is not truly the focus of NEA," she added. "When God is separated out from the human person, then this is where these types of ideologies really take root and develop and grow."

"For more than three decades the NEA has denied taking a pro-abortion position. This vote removes all doubt about where they stand," said Susan B. Anthony (SBA) List President Marjorie Dannenfelser.

"It is appalling and flies in the face of logic that America's largest educators' union, claiming to speak for more than three million members nationwide, would side with the extreme abortion lobby in embracing an explicitly anti-child and anti-family stance," she added.

Dannenfelser also noted that the Assembly claims to be non-partisan but then officially attacked President Donald Trump and his pro-life agenda and encouraged teachers and parents to voice their opposition loudly and clearly.

Why is the nation's largest teachers' union voicing support for such a hot-button issue that has nothing to do with the profession of teaching?

Writing for the Washington Examiner, Kate Hardiman reiterates the criticism that abortion has nothing to do with teaching.

"Why is the nation's largest teachers' union voicing support for such a hot-button issue that has nothing to do with the profession of teaching? Good question," she said.

Hardiman adds that the NEA's support for abortion also shows that the teachers' union does not represent teachers.

Just 41% of teachers describe themselves as Democrats, while 30% identify as independent and 27% as Republican, according to a national survey conducted in 2017 by the Education Week Research Center. Meanwhile, 29% of respondents voted for Trump in 2016 and 13% for a third-party candidate. It's clear that teachers are hardly a far-left crowd.

Hardiman noted that, after the U.S. Supreme Court's ruling in Janus vs. AFSCME, teachers are not compelled to pay dues to unions representing causes contrary to their beliefs.

"Concerned teachers cannot allow the unions to continue to advance a far-left agenda while posing as a representative of our interests," she said.