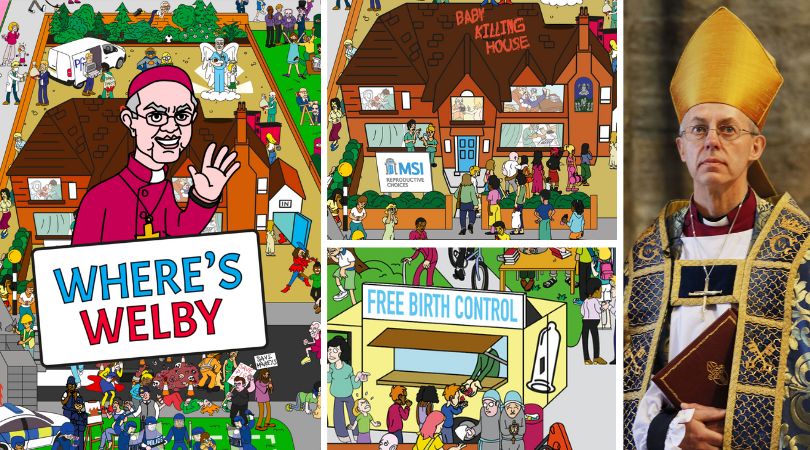 CANTERBURY, England (ChurchMilitant.com) - Pro-lifers are targeting archbishop of Canterbury Justin Welby at the global conference of Anglican bishops for his repeated refusal to condemn the genocide of abortion.

The satirical campaign titled "Where's Welby?" is specifically directed at chastising Welby in front of 650 bishops from around the world who are attending the two-week decennial Lambeth Conference in Canterbury, which runs until Aug. 7.

"Where's Welby?" is also educating the British public on the genocide of abortion using satirical posters, which are being wheeled on bicycles through the streets of Canterbury.

On Wednesday, the anti-abortion campaign moved to Lambeth Palace, the archbishop of Canterbury's residence, as bishops were bussed from Canterbury to Lambeth for a day of "prayer, reflection and action on the environment and sustainable development."

Silence of the Shepherds

Dr. George Hargreaves, the brain behind the campaign, told Church Militant that while the bishops were campaigning on behalf of the environment, there was "not a whisper on the biggest genocide in the history of humanity playing out right under their episcopal noses."

The campaign — inspired by an illustration from the Where's Wally children's game — prompted Hargreaves to ask, "Where do the archbishop of Canterbury and the Anglican Church stand on the issue of abortion?" The campaign is spearheaded by "The Abortionist," Britain's first satirical pro-life website.

The silence of the Church of England regarding abortion is deafening.

The organizers try to draw curious passers-by into closely examining an oversize illustration that depicts the many evils of the abortion industry: abortion procedures, organ harvesting, exclusion zones, arrests for praying, etc.

"Among the cacophony of images of personalities from politics, show business and the news media, a picture of Justin Welby can be found," Hargreaves said, explaining that the archbishop had earned the sobriquet "Wobbly Welby" for fudging his position on abortion.

The "Where's Welby?" image contains over 150 characters, including around 50 public figures, from politicians to sports pundits personally linked to the abortion crisis.

While exposing Britain's Catholic prime minister Boris Johnson for overseeing "the killing of his own child by his mistress Petronella Wyatt," the campaign illustration highlights the Good Counsel Network, a Catholic pro-life organization, for holding prayer vigils outside abortion mills and offering support to parents who want to keep their babies.

The illustration also includes a subtle dig at pharma-giant Pfizer for using fetal organ tissue in its products and disguising the use of fetal cells in the COVID-19 vaccine; as well as MSI Reproductive Choices, an abortuary chain founded by Marie Stopes, who, according to the campaign guidebook, "was also an outspoken eugenicist and advocate of Hitler (even penning love letters to him!)"

According to the pro-life campaign organizers, "The stubborn silence of the Church of England regarding the abortion genocide is deafening. While claiming they have a 'clear' position on the matter, the reality is incredibly muddled."

In 2020, the Church of England issued a statement on abortion claiming it "combines principled opposition to abortion with a recognition that there can be strictly limited conditions under which it may be morally preferable to any available alternative."

"In other words, they are against killing innocent babies, in principle, but can see a number of occasions where doing so is 'morally preferable,'" Hargreaves lamented. "This wholesale confusion has had a paralyzing effect on the church."

"We have reflected this confusion and muddled thinking by depicting a number of bishops earnestly praying against abortion and others having a picnic totally unaware of the carnage around them," the guidebook explains.

In November 2019, Welby backed the creation of buffer zones around abortion mills after a disabled pro-lifer, Christian Hacking, was arrested for praying in front of an abortuary, Church Militant reported.

"Do you support buffer zones around abortion clinics?" one listener asked Welby during a live interview on LBC Radio.

The Anglican denomination made sex an end in itself from the moment it validated contraception at the 1930 Lambeth Conference.

"Yes, I do, because people going to abortion clinics, whatever you think of abortion, they're human beings," said the archbishop of Canterbury, caught off guard by the question.

In August 2019, the archbishop of Canterbury and his fellow Anglican bishops skipped the critical House of Lords vote that resulted in the imposition of abortion in Northern Ireland.

None of the 26 bishops who served as voting members of Parliament were present or voted during the debate on July 17 and 18. Instead, on the day of the debate, Welby hosted a meeting of the Christian Muslim Forum at Lambeth Palace and tweeted the Lord's Prayer using emojis to celebrate World Emoji Day.

Pope Pius XI was so distressed by this defection that he wrote his encyclical Casti Connubii in reply.

Speaking to Church Militant, Dr. Gavin Ashenden, former queen's chaplain and a recent convert to Catholicism, earlier explained how "the Anglican denomination made sex an end in itself from the moment it validated contraception at the 1930 Lambeth Conference."

"From this rupture with revelation and Catholic theology, flowed a corruption of sex that has developed into the perversity of the celebration of homosexuality and the killing of babies in the womb," Ashenden lamented.

"Pope Pius XI was so distressed by this defection from, we may say, the common view of humanity in the natural law, that he wrote his encyclical Casti Connubii in reply," Pakaluk told Church Militant, adding that "the resolution was infamous, even in its day, because it flatly contradicted the Lambeth Conference of 1920."

Resolution 68 of the Lambeth Conference in 1920 uttered an "emphatic warning against the use of unnatural means for the avoidance of conception, together with the grave dangers — physical, moral and religious — thereby incurred."