VATICAN CITY, October 9, 2015 (ChurchMilitant.com) - After ChurchMilitant.com was the first to cover the pro-homosexual ideology of Vatican spokesman Fr. Thomas Rosica following the daily press briefings, high-ranking Churchmen seem to be noticing and agreeing — and calling him out.

One of the organizers of the Synod on the Family, Cdl. Wilfred Napier of South Africa, has responded on Twitter to a "progressive" talking point made by Vatican spokesman Fr. Thomas Rosica.

Father Rosica's Salt + Light TV tweeted a Zenit article about the Vatican spokesman's words at a press conference on Tuesday condemning "exclusionary language." The subtitle of the article read "Fr. Rosica Speaks on Synod Delegates, Fathers Discussing the Need to Embrace People Where They Are."

This caught the attention of Cdl. Napier, one of the more active Twitter users among Church leaders, who often personally responds to questions on the social media site. 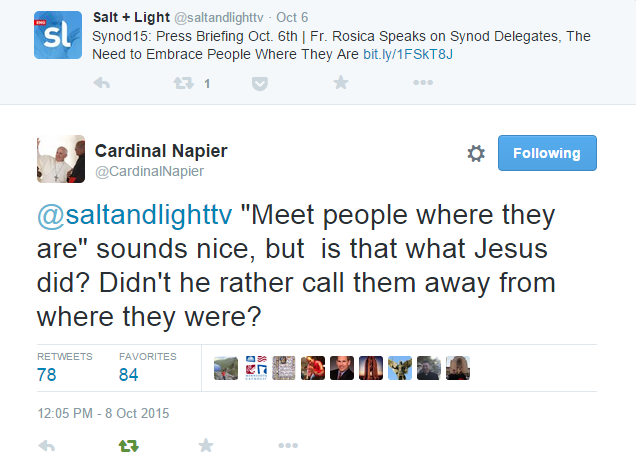 "'Meet people where they are' sounds nice," quips Cdl. Napier, "but is that what Jesus did? Didn't he rather call them away from where they were?"

The tweet amounts to a friendly challenge to Fr. Rosica's long-touted message of leaving behind doctrinal truth in order to let sinners remain comfortable in their sin. As Cdl. Napier points out, Christ never abandoned virtue to meet sinners in vice. He didn't merely comfort; He challenged as well. He called sinners away from their sins and toward Him, thereby showing and offering them the means of escape — of freedom — in the Truth.

Cardinal Thomas Collins of Toronto emphasized this point yesterday at the Synod.

Recalling his speech at the gathering, he stated, "The truest compassionate mercy is a compassion that challenges." Meeting sinners "where they are" works as one of the preliminary steps toward conversion, he noted, "but that is only the first thing. The second thing is to help them become what God wants them to be."

"Just to have accompaniment as people are moving in the direction away from the Lord is not enough," insisted Cdl. Collins. "We need to be with them in order to help people to follow our Lord."

Father Rosica has been finding himself in the spotlight of criticism a lot lately. After a "gay rights" activist managed yesterday to make it past the closely supervised process of getting press credentials, Michael Voris is pointing to Fr. Rosica as the man responsible.

How did an openly gay blogger who advocates for same-sex "marriage" and the Catholic Church to accept it and bless it get credentials to get into the press conference? He isn't media. He has no professional background in media. He's an advocate for gay rights. Period.

At this point, all eyes turn to Fr. Thomas Rosica, a man who is never without a friendly word for the gay subculture.

Further, the activist in question, Francis DeBernardo, ended up asking a misleading, disrespectful, ideologically laced question to an African prelate about the continent's bishops allegedly supporting harsh punishments for simply having a homosexual orientation.

As Nigeria's bishops have struggled to point out, Church leaders — in their country, at least — are being misrepresented by the LGBT-friendly media as endorsing cruel retribution toward homosexuals, when in fact they advocate for both a doctrinally and pastorally sound approach.

Father Rosica's friend, Jesuit celebrity-priest Fr. James Martin, has already taken advantage of the question by using it to apply pressure for his desired ideological changes — as retweeted by the Church-condemned New Ways Ministry. 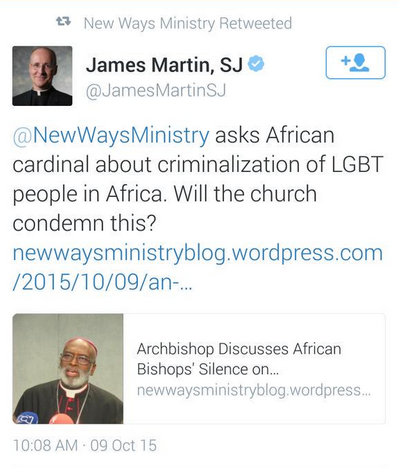 In light of documented attempts to undermine the African bishops' stalwart opposition to the gay agenda on their continent, many are indeed troubled by signs of possible cooperation by Vatican officials.

Meanwhile, Fr. Rosica appears to be on a "blocking rampage" on Twitter, as he seems to be restricting anyone who might be critical of him from accessing his tweets. 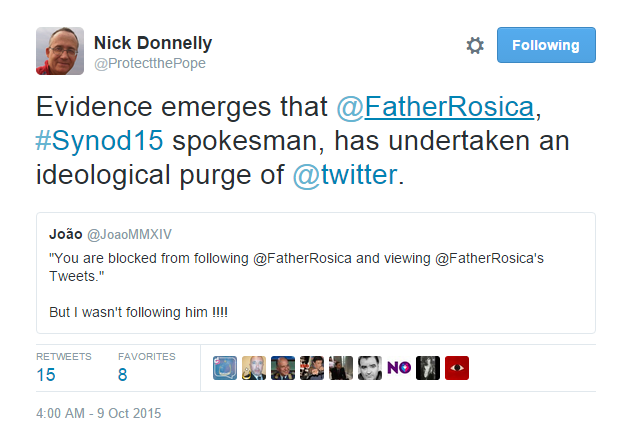 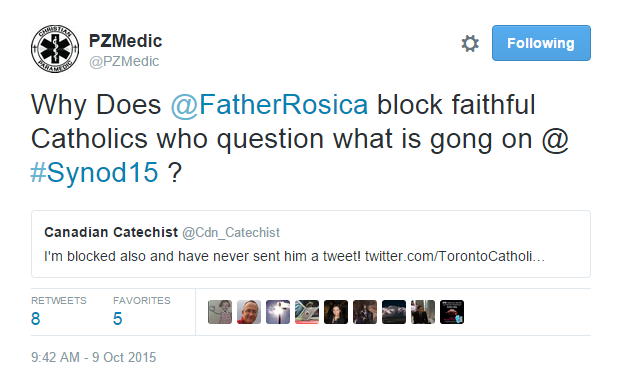 A new Facebook group has even been created for those who have been banned from his page.