Catholics Turn Out in Force to Protest Fr. James Martin at Misericordia University

Faithful Catholics turn out in droves to protest pro-gay priest

DALLAS, Pa. (ChurchMilitant.com) - Father James Martin gave the winter commencement address at Misericordia University on Sunday, while dozens of faithful Catholics were outside protesting and praying the Rosary.

One of the protesters, Patti, a member of Church Militant's Resistance Chapter in the area, told us that roughly "50–55 people" attended the protest, including other Church Militant Resistance members and members of the American Society in Defense of Tradition, Family & Property (TFP).

Patti said the responses from passersby were surprisingly peaceful and even supportive.

"I am not sure how the general public took our presence," she wrote, "but the hundreds of cars who passed us on the way into the parking lot were peaceful and ranged anywhere from puzzled to taking our pictures, but many blew their horns and gave us a 'thumbs up.'"

Participants in the prayer rally were given programs with the prayers and songs for the day. Our source told us, "I was surprised when I picked up the program ... and noticed there was only one Rosary, but the program was jam-packed with prayers."

"In between each decade, Ave Maria was sung," she explained. "In addition, we did the Litany to St. Michael, the Litany of Loreto, the Magnificat, the Divine Praises, Fatima Prayers, Act of Reparation to the Sacred Heart of Jesus, Prayer to St. Michael, Litany of the Sacred Heart of Jesus and ending with the Consecration to Jesus Christ the Incarnate Wisdom (by St. Louis de Montfort)."

Patti noted that the university had campus security monitor the protest, but they were cordial about it: "There were four assigned campus guards who stayed close to us at all times. They were friendly and very respectful. We thanked them at the end, and they were invited to go for pizza with the group. I was the last to leave at about 3 p.m., and they stayed with me until the end. They were very impressive."

The prayer programs for the rally were accompanied by flyers for an upcoming local event about Fr. Martin on January 6, titled "The Modernist Roots of Fr. Martin's Moral Revolution," sponsored by TFP and America Needs Fatima. It will take place at a nearby pizza restaurant that seems to be run by a Catholic family.

Father Martin is a highly controversial figure owing to his endorsement of the homosexual agenda — sometimes subtle, sometimes not so much.

The Jesuit celebrity priest has been on a speaking tour for his recent book, Building a Bridge: How the Catholic Church and the LGBT Community Can Enter into a Relationship of Respect, Compassion and Sensitivity. By itself, Fr. Martin's book says nothing that specifically contradicts Catholic doctrine. He does, however, make problematic and heterodox comments on social media and in various speaking engagements.

In early October, Fr. Martin showed support on Twitter for Fr. Gregory Boyle, a fellow Jesuit who voices dissent against Church teaching on marriage and sexuality.

In a podcast in June, Martin said he would "canonize" pro-gay activist Sr. Jeannine Gramick, who was censured by the Vatican for her dissent. She founded New Ways Ministry, which has been condemned repeatedly by Church authorities owing to its rejection of Church teaching on homosexuality and chastity. 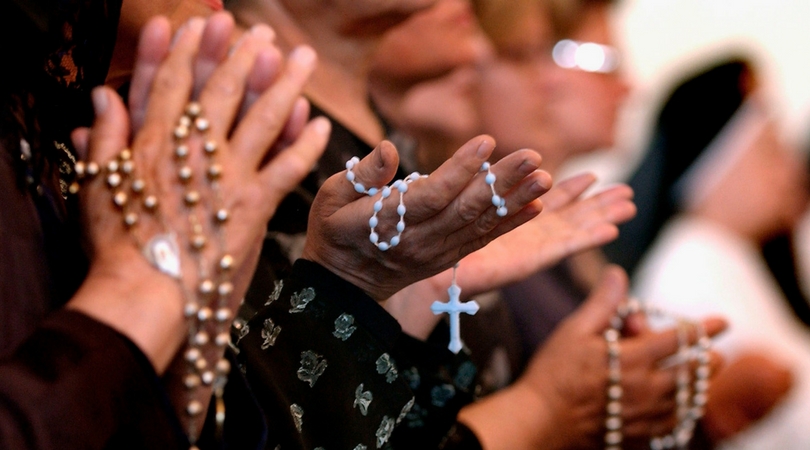 Rosary of Reparation for Fr. Martin Speech
By David Nussman   •   0