Public Masses Back in Italy 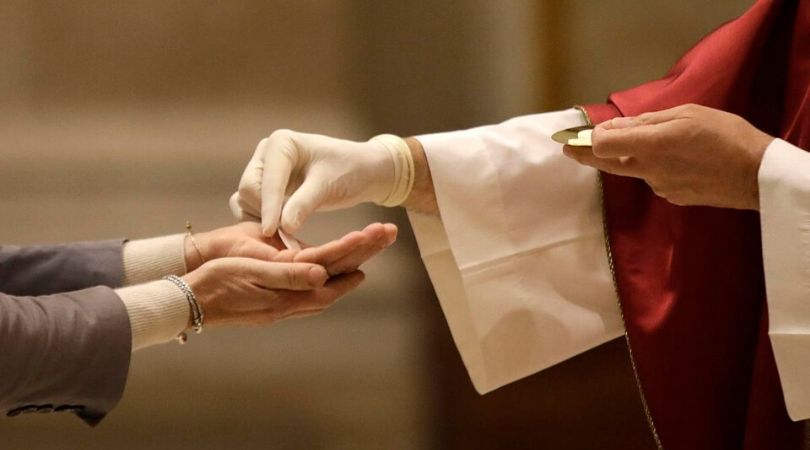 ROME (ChurchMilitant.com) - Public Mass has resumed in Italy after roughly 10 weeks of lockdown.

The Holy Sacrifice of the Mass re-opened to the public throughout Italy on Monday. Catholics expressed gratitude for the chance to attend Mass and receive Holy Communion. Many Italian faithful — perhaps the majority of them — have been without the Eucharist since mid-March.

Public Masses were cancelled in March, amid lockdown orders due to the Wuhan virus pandemic.

As access to Mass returns, many are voicing concern about a protocol from the Italian bishops, which says those distributing Holy Communion ought to wear a disposable mask and disposable gloves.

Since the disposable gloves will touch the Eucharist — in which Christ is physically present — many are worried that if the gloves get thrown away, so will Eucharistic particles.

As St. Peter's Basilica in Vatican City opened for Mass, faithful wishing to attend Mass lined up to get their temperatures taken before entering.

Church Militant's Rome correspondent Jules Gomes commented on Tuesday about some of the new sanitary measures — such as placing hand sanitizer stations at the doors and keeping the congregation spaced six feet apart.

Who do the gloves protect? Certainly not the person receiving communion; the gloves just become a surface transferring whatever the priest touches.

"The social distancing measures are sensible," Gomes said. "Given the scare, and the sign of relief that people at least are able to get back to Mass, they don't seem too cumbersome."

Some parishes are avoiding packed pews by offering more Mass times than usual. Gomes noted, "In one well-attended parish, where the Latin Mass is offered, the number of Masses has been increased from two to five on Sundays."

He shared photos from Santa Maria Stella Maris, a church in Ostia — a seaside neighborhood in Rome. The pews were removed from the main body of the church, and replaced with chairs — but two of every three chairs had a sign saying "vietato sedersi" — "sitting prohibited."

Though many are glad to attend Mass again, some are outraged by the use of disposable gloves for distributing Holy Communion.

National Catholic Register's Rome correspondent Ed Pentin tweeted about the practice on Monday, and many Catholics expressed disdain for the use of latex gloves to handle Our Lord.

"This is asinine," remarked one Twitter user, to which another replied, "Who do the gloves protect? Certainly not the person receiving communion; the gloves just become a surface transferring whatever the priest touches."

One person said, "I can only imagine how many tiny fragments — which are Our Lord — are sticking to gloves and falling to the floor."

Others expressed fear over what happens with the gloves, which likely have particles of Our Lord.

Many reacted with shock at photos of a priest using latex gloves to distribute Holy Communion, calling them "grotesque" and "an appalling sight."

Some of the replies challenged the effectiveness of wearing gloves in this context, saying things like, "Completely lost the point of disposable gloves. You change then between people so you're not transmitting the virus. If you don't, you might as well not bother."

"Disturbing," another reply reads. "Who are the gloves intended to protect? Typically only sterile gloves (used for operations) protect the patient. This is likely causing more harm than good and being done for political showmanship."

Another issue that is sure to cause controversy among faithful Catholics is reception of Holy Communion on the tongue.

Gomes noted that Communion on the tongue has been barred by the bishops, not the government.

He remarked, "Obviously, in some cases, like Communion on the tongue ... the typical Italian sport of 'it is all a matter of interpretation' will kick in and we will have some fun."