Quentin Tarantino’s Nihilistic ‘Once Upon a Time in Hollywood’ 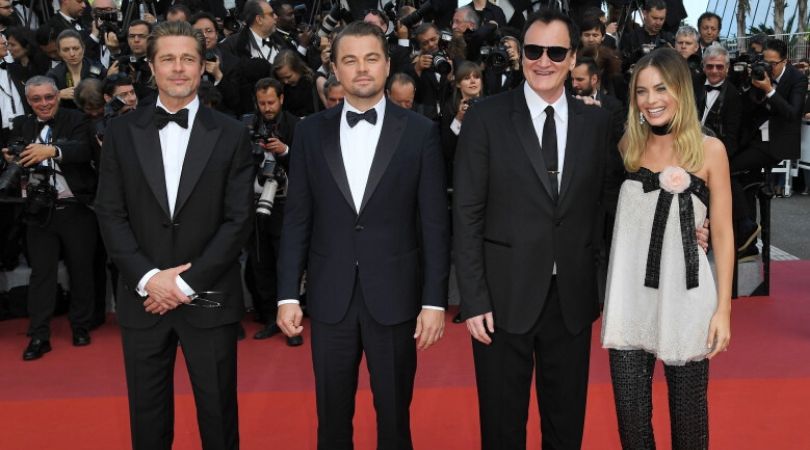 Versus our need for Christ, the Divine Logos

In his 1967, De la grammatologie (published in English in 1976 as Of Grammatology), one of the seminal works of postmodernism, French philosopher Jacques Derrida describes his conception of "the trace."

For Derrida, all language (and, by implication, all culture) consists of signs that refer not to tangible, metaphysical objects, but rather to other words, which themselves signify other words and concepts.

The instituted trace cannot be thought without thinking the retention of difference within a structure of reference where difference appears as such and thus permits a certain liberty of variations among the full terms. ... The trace must be thought before the entity. But the movement of the trace is necessarily occulted. It produces itself as self-occultation. When the other announces itself as such, it presents itself in the dissimulation of itself. This formulation is not theological, as one might believe somewhat hastily. The "theological" is a determined moment in the total movement of the trace. The field of the entity, before being determined as the field of presence, is structured according to the diverse possibilities — genetic and structural — of the trace. The presentation of the other as such, that is to say, the dissimulation of its "as such," has always already begun and no structure of the entity escapes it.

In this (absurdly and typically) tortuous prose, Derrida presents one of his central concepts: All language is a seemingly infinite spiderweb of linguistic and conceptual signs that never, in the end, reveal any truth or substantial metaphysical reality (such as God).

Lost in this "garden of forking paths" (to use a term from another pioneer of postmodernism, Jorge Luis Borges), postmodern European men and women living in the ruins of World War II were left either with despair and desperation or the choice of Nietzsche and Camus — take up the Sisyphean task of crafting meaning from the hollow nothingness of life.

Nihilism, like postmodernism itself, however, never really took off in the United States, because Americans — at least until the 21st century — were too busy making money and having fun to worry about whether one could provide a theological justification for God or an authentic anthropological account of the human person.

Nihilism and despair in the United States was always for marginalized movements such as grunge music, beatniks and cults — like the Manson Family.

Quentin Tarantino's latest film, Once Upon a Time in Hollywood, recently released on streaming and DVD (and still making the rounds in the theaters) is, on one level, a deeply Derridean (yes, there is such a word) and nihilistic movie.

Once Upon a Time thus contains, perhaps the left-leaning Tarantino's intentions — a mournful, almost conservative, lament of how something of America was lost irrevocably when the Greatest Generation, which had fought World War II and had built the United States into the great superpower of the 20th century, passed the baton to the Baby Boomers.

At the same time, Once Upon a Time is saturated with the irresistible kitsch of American pop culture.

Even in his dirty "valley trailer" parked behind a drive-in movie theater, Pitt's Cliff Booth deftly prepares Kraft Macaroni and Cheese on a small table decorated with Wheaties and Wonder bread.

The film is drenched with what now in our post-ironic age appear to be silly (but at the same time) alluring, catchy radio and TV commercials as Pitt and DiCaprio ride around in a 1966 Cadillac Coupe de Ville or crack open beers to watch The FBI together in Rick Dalton's Hollywood Hills bungalow.

The film is, like of all of Tarantino's works, a pastiche of classic and B-grade movies and TV shows, and, also like Tarantino's most (in)famous film, Pulp Fiction (1994), Once Upon a Time is also about American music — the good, the bad, and the ugly — all of which are adored and loved by not only Americans, but also people all around the world who gradually fell under the spell of rock and roll.

Tarantino is a lapsed Catholic, and this absence of faith and the coherent worldview faith provides saturates Tarantino's work.

Against the backdrop of Hollywood movie sets, desert horseback rides and cruising through "The City of Angels," in typical Tarantino fashion, classic artists recognized for their genius like The Rolling Stones and Simon and Garfunkel blend with lesser luminaries like Paul Revere and the Raiders and Vanilla Fudge.

As often has been remarked, Tarantino loves mid-20th century Americana, something — despite the often horrific violence of his films — which permeates his work and irresistibly draws the viewer in to feast on the sounds of "California Dreaming" and the sight of Leonardo DiCaprio and his character's Italian wife adorned in floral print, triumphantly walking down the terminal of LAX.

Yet, at the same time, even this parade of 60s pop rings hollow and ultimately reveals that it too is insubstantial and but a "trace" of something else.

Once Upon a Time is about the decline of Rick Dalton's acting career, but it is also about the death of the Golden Age of the Western film — DiCaprio's Dalton was famous for a 1950s TV show called Bounty Law.

Moreover, even the Western at its height, under the skillful direction of John Ford, was itself a "trace" and a lament of the death of the American frontier and the slow and boring domestication of American life in the 20th century.

Once Upon a Time is a movie about many things, but one of its most critical themes (a theme it shares with Woody Allen's 2011 film Midnight in Paris) is that nostalgia for a place in time is ultimately a futile feeling. Things in the past were not necessarily better; they just look better.

However, maintaining a (typically American) post-ironic refusal to "look behind the curtain and see the ultimate emptiness of his godless worldview," Tarantino retreats into the illusory refuge of art. The movie ends with DiCaprio, after having killed the members of the Manson Family (who had, in Tarantino's re-telling, failed to kill Sharon Tate), being welcomed through the gates of Roman Polanski's house on Cielo (Spanish for "Heaven") Drive for drinks and a possible jump-start of his movie career.

As Catholics, we know that at the center of the web of language is the Divine Logos, Our Lord Jesus Christ, who is the ultimate source of meaning and value for us.

As humans living at what appears to be the end (or at least "an end") of the prosperous and brightly colored 20th century economic and cultural boom, we might be tempted to look back to the apparently more secure and (at least possibly) happier century that proceeded us.

However, as Catholics, we know that at the center of the web of language is the Divine Logos, Our Lord Jesus Christ, who is the ultimate source of meaning and value for us.

As St. John says in the prologue to his Gospel:

Christ gives meaning not only to our lives, but, as the Divine Logos, He gives coherence and stability to our culture.

Quentin Tarantino is not a great director, but he is a very talented director with a (misguided) passion for beauty and for social justice (albeit a distorted, leftist vision of social justice). Also, like truly great (but deeply morally flawed) directors like Martin Scorsese, Francis Ford Coppola and even Christopher Nolan, Tarantino is a lapsed Catholic, and this absence of faith and the coherent worldview faith provides saturates Tarantino's work.

As part of the rebuilding of Catholic culture, we need artists who have grounded their lives and their aesthetic vision on the Divine Logos.