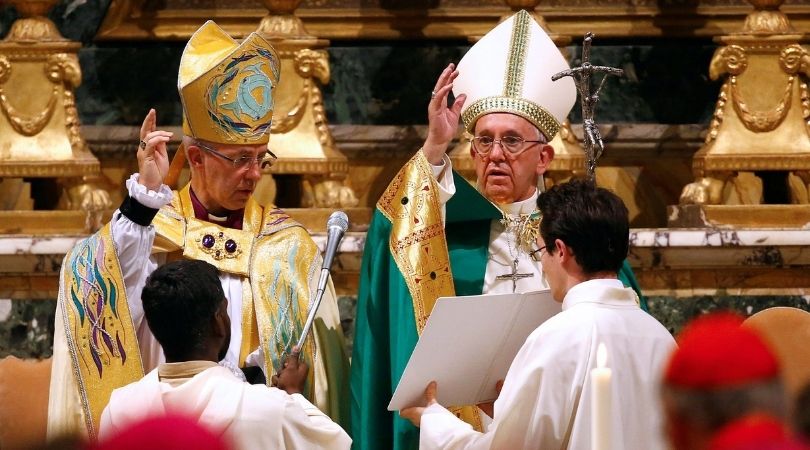 At a meeting organized on Wednesday by the prestigious Pontifical University of St. Thomas Aquinas (Angelicum) in Rome, Catholic and Anglican bishops, priests and nuns skirted the innovation of Anglican women clergy.

The group's 27-page document titled "Sorores in Spe: 'Sisters in Hope of the Resurrection' — A Fresh Response to the Condemnation of Anglican Orders (1896)" said it would be "wrong" to use women's ordination as a pretext to avoid addressing Pope Leo's "adverse judgment" on Anglican orders.

"The fact that women can (in most Anglican provinces) now be ordained does not, in itself, mean that the pope's condemnation of 1896 must be applied to the present situation," the document noted.

Women's ordination has produced a mixture of schism and the abandonment of the most fundamental scriptural norms.

In comments to Church Militant, former Anglican bishop and Queen's chaplain Dr. Gavin Ashenden warned that "these conversations constitute a cover for those who have sacrificed the theology of the Church at the altar of feminism."

Dr. Ashenden, who converted to Catholicism in December 2019, elaborated:

Women's ordination has produced a destabilizing mixture of schism and the abandonment of the most fundamental scriptural norms. It is much to be regretted that a movement posing as an agent of unity will, if successful, turn out to be an agency of schism and spiritual destitution.

The current state of Anglicanism ought to constitute a grave warning to the Catholic Church not to be seduced by the spirit of the age. Instead of calling society to repentance and conversion, Anglicanism (platforming for feminism and political utopianism) has been converted by its surrounding culture.

MCG, sparked off by archbishop of Malines Cdl. Désiré-Joseph Mercier in 1921 and now under the patronage of "St. Gallen Mafia" cardinal Godfried Danneels, repeatedly cited ecumenical documents from Vatican II (e.g., Unitatis Redintegratio), insisting that "ecumenism could no longer be based solely on an invitation to 'return' to communion with Rome."

MCG also noted that the Vatican II decree on ecumenism singled out the Anglican Communion as occupying "a special place" among "those [communions] in which Catholic traditions and institutions, in part, continue to subsist."

The document's attempt to brush aside the significance of female ordination is astonishing.

Moreover, the Roman rite's ordination liturgy was significantly revised in the wake of the Second Vatican Council, resulting in a remarkable similarity between contemporary Anglican and contemporary Catholic ordinals.

The Church of England likewise revised its ordination rites after collaborating with, inter alia, Catholic theologians and with an eye towards critiques of Apostolicae Curae.

"There are profound liturgical and theological similarities between our churches when it comes to the rites of ordination and the understanding of the diaconate, priesthood and episcopate," the MCG document emphasized.

But Una Voce International president Dr. Joseph Shaw noted that "the fact that the revised rites of ordination are open to the kind of misunderstanding displayed by this document is a reminder of the value of the older liturgical books."

Anglicanism, platforming for feminism and political utopianism, has been converted by its surrounding culture.

"Even if they were never used again, they represent the Church's self-understanding over the course of a millennium and more, an understanding which enjoys the infallibility of the ordinary Magisterium," Shaw, chairman of the Latin Mass Society of England and Wales, told Church Militant.

The document's attempt to brush aside the significance of female ordination is astonishing. Cardinal Walter Kasper made it clear at the time that this was a deal breaker for reunion, and obviously there can be no question of the recognition of the orders of a body composed in part of women.

In trying to paper over the differences between Catholic and Anglican thinking, this document only serves to emphasize them. For example, its understanding of apostolic succession is completely alien to the Catholic faith.

The "Sorores in Spe" document also maintained that the "language of symbols" between recent popes and archbishops of Canterbury — beginning with Pope Paul VI's gift of his episcopal ring to Canterbury archbishop Michael Ramsey in 1966 — indicated that Rome had begun to accept Anglican orders.

Popes have given Anglican bishops pectoral crosses, the Anglican priest and scholar Henry Chadwick was given a stole, and Pope Francis gave Abp. Justin Welby a replica of the head of the crozier of Pope St. Gregory the Great in 2016, the document noted.

In addition, "visits of archbishops to popes, the attendance of Anglican bishops at ad limina visits and Roman synods, the visits of St. John Paul II and Benedict XVI to England and the offering of joint blessings have cast our relationship in a thoroughly new light," it claimed.