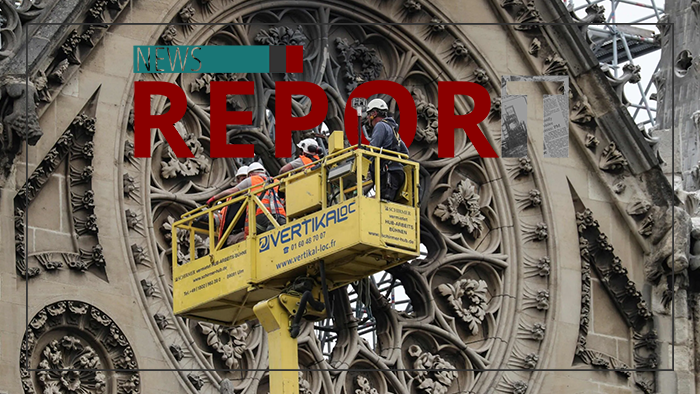 France, nicknamed the eldest daughter of the Church, is continuing to restore its spiritual icon — Notre-Dame.

In tonight's In-Depth Report, Church Militant's Rodney Pelletier brings us up to date on the rebuild of one of Europe's greatest treasures.

Experts from all over France are working on this massive five-year project to rebuild and restore Notre-Dame Cathedral in the heart of Paris.

The ceiling and spire, built in the 13th century out of oak and lead panels, collapsed in an April 2019 fire that shook people around the world.

Three years later, there still has been no conclusive answer as to why the fire started.

A new PBS documentary called Rebuilding Notre Dame shows the progress of the project, now in its third year.

Hundreds of specialists from all over France are working to have the cathedral fully restored by 2024, just in time for the Summer Olympics in Paris.

The burning of Notre-Dame had been preceded by a massive increase in church fires and vandalism, as well as increasing anti-Catholic sentiment in France.

The fact that French investigators have not provided answers as to exactly how the fire started even three years later continues to fuel speculation the cause is being covered up.

And immediately after the fire, debate raged as to whether Notre-Dame would be rebuilt to reflect more modern and humanist principles.

But in July 2019, the French government seemingly ended the debate by ruling the cathedral must be restored to its "last known visual state."

The archdiocese, however, is pushing for renovations on the inside. Members of the National Heritage and Architecture Commission are slamming that maneuver, saying, "The diocese of Paris wants to take advantage of the restoration project to transform the interior of Notre-Dame into a project that completely distorts the decor and the liturgical space."

It's not the first modern renovation of the iconic Paris church. In 1789, the cathedral was seized by the Freemasons of the French Revolution, who, in 1793, rededicated it to the so-called Cult of Reason.

But in 1801, Napoleon gave back control of the cathedral to the Catholic Church, and its gradual restoration continued throughout the 19th century.

Some critics claim that the 2024 deadline is a political stunt because the project could take 10 to 15 years, but the project is moving along.

The men and women working tirelessly to rebuild and restore Notre-Dame seem to take great pride in their work and appreciate being part of its history.