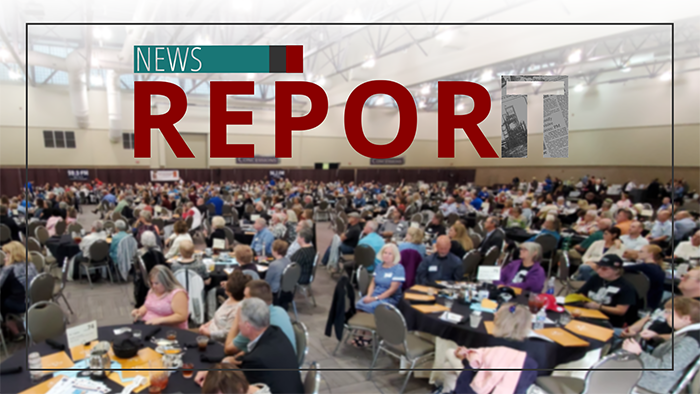 As workers were setting up for tonight's shindig, the buzz was still going strong. It was this letter from Abp. Michael Jackels that started the uproar here in his archdiocese. However, it was not the first letter.

He had first sent an instruction to his priests and deacons not to attend — then a follow-up to archdiocesan workers not to attend. Once those got around, he decided to go full-on public. But his effort to discourage attendance appears to have blown up in his face. Since he made the letter public last month, attendance has shot through the roof, with hundreds more signing up.

It's baffling, frustrating and really disheartening. But, you know, Catholics have an innate sense of what is true and what is holy and what is Catholic. They understand that Aquinas Communications will speak for them and to them and help them as they navigate this secular culture, this Culture of Death.

Extremely telling and especially galling to those in attendance is that Jackels says nothing about horrible attacks against the Faith by other supposedly Catholic outfits here — but attacks this faithful radio station.

Tom Oglesby, president, Aquinas Communications: "Well, there are drag queen shows — I don't know what happens there, but they've been at a Catholic university in this archdiocese. There are Marxist speakers at Catholic colleges in this city."

At the end of the 19th century, Dubuque was the center of the Faith in the United States — loads of religious motherhouses, women religious orders and so forth.

It would appear that those deep roots are flourishing anew here, as Catholics express their resistance to being bullied and even canceled by an archbishop who looks the other way on gross evils propagated by dissident Catholics in his diocese — but won't even attempt to talk with faithful Catholics who just want to help save souls.

Oglesby: "If the archdiocese wanted to have a conversation about what was going on and that there was a concern on their part, they know where we live. ... You know, we have telephones."