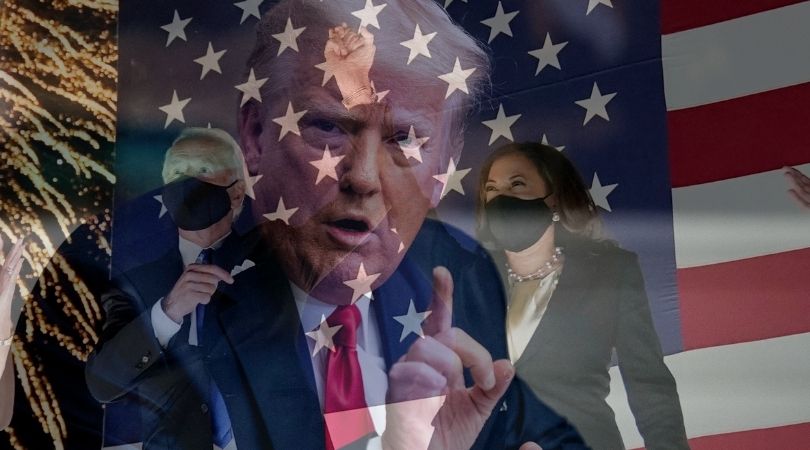 The color of revolution

Popular responses to American culture and politics move at the speed of social media news, involving several prominent ledes per day, during "peak" times. Fittingly, the recent American memory has contracted such as to accommodate and contextualize these rapid-fire ledes, one at a time.  In a word, the sheer volume of interesting news works against the American patriot's ability to yield — or even to formulate — a meaningful response to its call.

We've been conditioned to forget as soon as they opportunely drop a new story on us.

Since Nov. 3, the blistering new pace of it all has been weaponized — even further — against the American memory in a frighteningly specific way: This autumn, it involved the repeated use of a certain term, up to a precise juncture, after which it was deliberately vanished from virtually all recollection.

We awoke on Nov. 4 to find we are denizens of the age of "color revolution," a real-world psychological operation which U.S. intelligence agencies have occasionally used to decide the winners of elections in South America and Eastern Europe. Evidently, they decided to use color revolution domestically to oust President Trump from office.

As described on the podcast Rules for Retrogrades by former Trump senior security official Michael Anton, a color revolution can effectively determine the outcome of an election (i.e., making the loser "win") through the combined use of: systematic electoral ballot fraud — point-padding and point-shaving; airtight collusion between politicians and media companies silencing all meaningful dissent; most importantly, a thoroughgoing narrative before, during and after election night.

If these three conditions are met, color revolutions succeed with stultifying efficacy. Sound familiar yet? The third prong makes the whole thing work. Most conservatives already know all about the first two prongs. But the narrative prong is what most folks — even suspicious ones — miss in color revolutions.

In the American color revolution of late 2020, the term "red mirage" proves, in retrospect, to be the keystone, hidden in plain sight, like Edgar Allan Poe's "purloined letter," nakedly propped on the mantle as every nook and cranny of the home is furiously searched for it. Its planners — presumably friends of those openly saying before the election that Biden should not concede "under any circumstances" — preempted election night by saying that there would be a "red mirage." They defined the phenomenon they guaranteed as an early electoral lead by Trump in the six battleground states, which they claimed to know would later vanish like a mirage. In a way, they did know it: Trump's lead would vanish, but not because of mail-in votes. They knew it because they trusted the unfailing efficacy of the unannounced part of what they had planned: cheating.

They knew it because they trusted the unfailing efficacy of the unannounced part of what they had planned: cheating.

Think of it like this: You are the inferior bowling team (i.e., Joe Biden), the Blue Team, vastly outmatched by a much better team (i.e., Donald Trump), the Red Team, to be played in one month's time. Assume you are 100% willing to cheat and you have organizational/administrative access to the scorekeeping apparatus sufficient to "cover the spread" in Red Team's prospective lead. Assume that during this entire month you plan to cheat after the sixth frame, at which moment onward, each point you score will be tabulated 1.33 and each point your opponent scores will be worth, conversely, .667.  In other words, your cheating software — and other various fail-safes we might analogize — has prepared you for virtually all contingencies.

Nevertheless, you must spend the month leading to game day crafting a narrative that explains to viewers why your fate reversed so decisively in the final 40% of the game. This is where sheer volume and disciplined repetition spell "color revolution": You must spend the month repeating ad nauseam that America's bowling fans should expect a "red mirage" in the first six frames on account of some boring technicality: "Red will jump out front to an ultimately meaningless lead."

Fabricate the justification for red mirage out of thin air: old injuries on Team Blue which cause slow starts, barometric pressure differentials in Blue's practice facility, global warming, the cosmic microwave background radiation, etc. Who cares what it is. Just repeat it on all six major bowling news networks — which you own — and repeat it nonstop. Spell it out for both the more and the less literate. Americans will believe anything if you repeat it on all six major bowling networks. Even tepid conservatives will bend the knee to obvious media lies if the media outlets stick religiously to their script. ("Those are the rules," they'll tell you, even if one side cheated.) But such repetition must be ubiquitous and unfailing, or else none of it works.

Game day arrives. Things work out predictably: Since your Blue Team is the clearly worse team, you fall way behind, just as you foresaw. You call a time-out (or whatever they do in bowling) after six frames and each party has his cue activated. It's a turkey shoot. Each man knows his job and does it.  You have the technological advantage as well as the narrative advantage because you've preconceived and pre-sold the game script for the past month.  Blue Team "wins" the last four frames decisively, and the day after the bowling contest — which is Nov. 4 — all six major media outlets recur to "red mirage" one last time to cover the explanatory gap.

Decisive early leads usually indicate what they seem to. We won.  Hang tough.

Beginning on Nov. 5, by widespread agreement on the six bowling networks, no one will ever utter the term again because its subtlety is abjectly deprived ex post, now that certain less gullible bowling viewers are scratching their heads in wonderment. Ex ante, even the shrewdest bowling fans shrugged their shoulders at the media's insistence that Red Team would enjoy such a strong start. Now, if you remain mum, all that anyone really recalls is that the media "predicted" quite well what happened on Nov. 3.

So there you have it.

In closing, the benefits of expectation management and narrative control by cheaters are undeniable: Critical allusion (by Red Team's fans) to the strangeness of the "comeback" by Team Blue is all but precluded before game day. (After all, how many Trump fans have you even heard lamenting the unlikely comeback defeat?!) "Well, this is what they said would happen, and we dared to hope against hope that it wouldn't eventuate," Team Red's fans admit shamefully to themselves.

Understanding that red is the color of the 11/3/20 color revolution is tantamount to understanding the reality of large comebacks in sports; they rarely happen for a reason. Decisive early leads usually indicate what they seem to. We won. Hang tough.

Timothy Gordon is a podcaster, author of Catholic Republic: Why America Will Perish Without Rome and co-author with his brother, David Gordon, of Rules for Retrogrades. He was recently released from his employment as Head of the Theology Department and theology teacher at Garces (Catholic) High School in Bakersfield, CA for tweeting that Black Lives Matter is a terrorist group.
--- Campaign 31877 ---