Resistance Jabs Back at Vaccine Drive 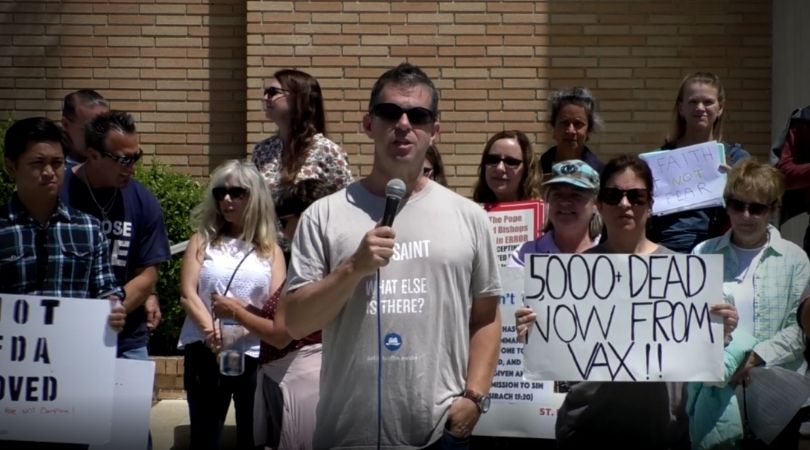 Church Militant's Orange Resistance chapter in California held a prayerful protest June 5 in response to its local parish hosting a COVID-19 vaccine drive. Some 30 members of the Resistance chapter met at St. Boniface Catholic Church in Anaheim holding signs, praying the Rosary and speaking outside with potential recipients of the jab.

The passionate group was joined by renowned Catholic author and podcaster Patrick Coffin. He helped the group share information with those who came for the jab. Coffin explained the rally's main purpose was to provide "awareness and information" about the so-called vaccine. He noted that none of the potential vaxxers they spoke with were aware the gene-altering shot was not FDA-approved.

The chapter's Rosary rally succeeded in turning away a large number of would-be-vaxxed individuals, which in turn forced the drive to close three hours early. This victory, however, was not without obstacles. Pastor of St. Boniface, Fr. Juan Navarro, was reportedly unhappy with the protestors and called the police on the devout Catholics. But upon arrival, the police took no action against them.

The peaceful protestors were allowed to continue their work outside the vaccine drive thanks to the First Amendment. It could have easily gone the other way, however, because California passed a bill last May that prohibits protestors from "interfering" with any individual at a clinic or from getting too close to so-called vaccination sites.

This is neither the first — nor, unfortunately, the last — time that a Catholic church has pushed the dangerous injections on its followers. It's becoming a popular trend for parishes to offer the Lord's house to administer the unapproved shots.

The controversy has heightened considerably since the Vatican issued a statement saying the jab is "morally acceptable" to receive despite ethical concerns about the use of cells derived from aborted children. Further still, the Vatican in December began offering the Pfizer jab to residents, employees and their family members.

This is the battle of our lifetimes.

"I do not understand why some say that this could be a dangerous vaccine," the pontiff said during an interview. "There is a suicidal denialism that I would not know how to explain, but today people must take the vaccine."

Since this statement, the Centers for Disease Control (CDC) has reported nearly 6,000 deaths of people who had received the shots. Although rare, the CDC also lists risks associated with it — such as allergic reaction, blood clots and heart inflammation.

Francis further related that he believed it was everyone's moral obligation to get a shot for the safety of others and themselves. Since then, the Vatican has continued its attempts to combat so-called vaccine hesitancy throughout the Church with various statements in recent months.

Despite growing numbers of Catholic clergy siding with Pope Francis, there are some who continue to speak out against treatments that use aborted fetal cell lines. One such holy man is Bp. Joseph Strickland of Tyler, Texas.

"As your shepherd, I cannot in good conscience receive a vaccine that has been produced by an aborted child," he wrote in a letter regarding the jab. Strickland also urges the faithful in his diocese to "exercise patience and educate your consciences."

Churchgoers should not be surprised if they soon feel pressured by church authorities to receive the jab. Speaking to Catholics around the nation, Coffin was adamant that if your bishop or priest is pushing the injections, or if your parish is being used to distribute them, do what you can to stand up and speak out.

"This is the battle of our lifetimes," Coffin told Resistance members. "We were born to fight this battle, and with Our Lord's help, who can be against us?"