OMAHA (ChurchMilitant.com) - A group of parents in Omaha are setting a precedent against public schools pushing the LGBT agenda.

The battle started when Omaha Public Schools (OPS) vowed to update the sex education curriculum for 50,000 students in 2015. Nebraskans for Founders' Values (NFV), a traditional family advocate group, took the school district to task over the graphic and inappropriate nature of the curriculum.

Maris Bentley, member of NFV, told Church Militant, "The materials they are teaching are horrendously evil, including abortion, homosexuality and gender confusion." Language from the curriculum can be viewed here (warning: graphic content).

The school district ultimately adopted the sex education curriculum in January 2016, for the 2016–2017 school year, but not without a fight from parents.

Bentley and others from NFV traveled all across Omaha warning families about the danger of the biased curriculum and encouraged parents to take advantage of the opt-out provision.

Despite being labeled a "squeaky wheel" and a "small majority" by OPS School Board member Matt Scanlan, NFV members covered every one of the more than 80 elementary and secondary schools with pamphlets, encouraging parents to opt their children out.

According to a press release, "Students attending the camp last fall received a bag that contained over a dozen condoms, sexual lubricant and a dental dam for oral sex. Additionally, students submitted to a confidential HIV test, practiced fitting a condom to a banana and were given access to an abortion counselor."

In 2016, NFV also received unexpected help from the archdiocese of Omaha. "We have done dozens of presentations to parents and concerned citizens of the actual content, most of them held at Catholic churches." Bentley told Church Militant. "The chancellor of the archdiocese took us seriously enough to go out on a limb and place on the archdiocese website some of the content which we had shared with him."

Members of NFV claim it was the archdiocese that helped remove some of the objectionable language from the curriculum. According to a local newspaper, "OPS officials won't fully concede the point, saying input on the curriculum came from staff, parents and community groups, including Nebraskans for Founders' Values and the archdiocese." 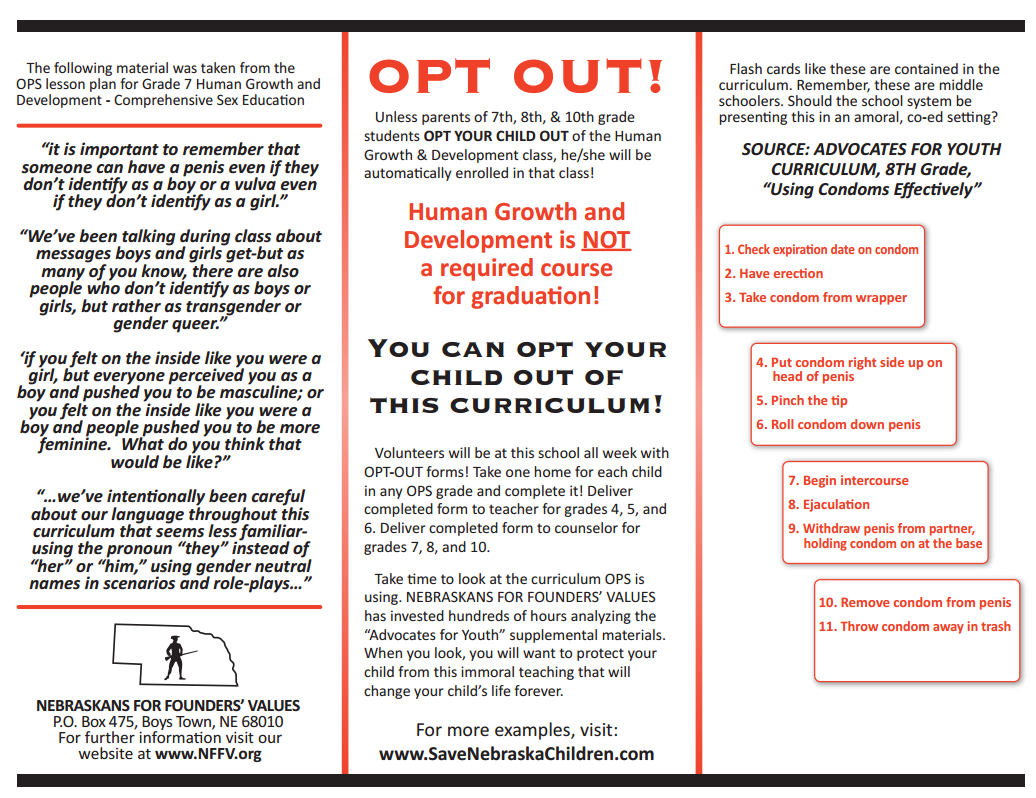 Bentley claims the fight in Omaha is just the beginning of the radical LGBT agenda: "Since beginning this battle about two years ago, we have discovered that the same battle is raging everywhere. We know and have met Catholics and Protestants in Hawaii, Texas, Arizona, North and South Carolina and Missouri who are involved in the same efforts."

Although NFV was not satisfied with the ultimate outcomes of the changes made in the OPS curriculum, Bentley says the fight continues for traditional family values.

NFV is turning its fight to the Nebraska legislature in Lincoln. Politicians on both sides of the aisle will debate a law which mimics a Washington state bill from 2009. The bill forces those businesses with moral or religious objections to participate in the conduct and lifestyle of LGBT persons.