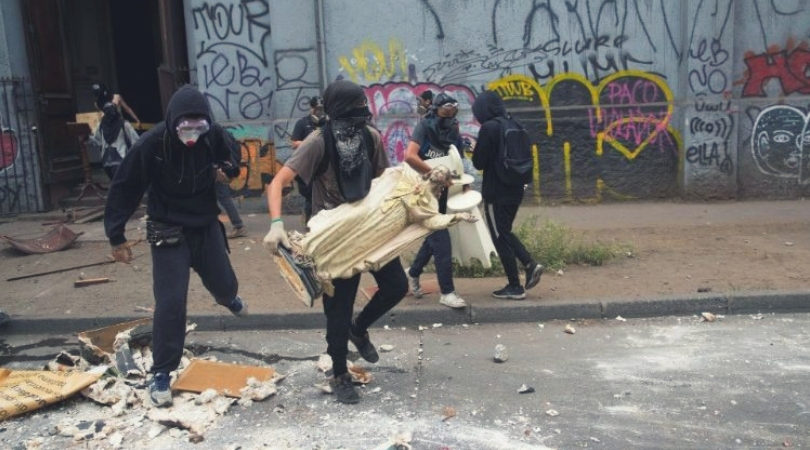 SANTIAGO, Chile (ChurchMilitant.com) - Rioters looted a church and burned its contents on the street in Chile's capital on Friday.

Vandals stormed La Asuncion Church in Santiago and took out pews and chairs to add to a burning barricade. They also took statues and images of Jesus from the church as well as statues of the Blessed Virgin Mary and the saints to be burned in the fire.

This occured amid weeks of protests in the capital. Protests began in response to a recent raise in subway fares in Santiago. But demonstrators' complaints grew to include income inequality, low wages and Chile's high cost of living.

The nearby headquarters of Pedro de Valdivia University was also looted on Friday. The university billowed with smoke as well, but officials are not certain whether that fire was caused by the demonstrators.

The bishops conference of Chile condemned the attack on La Asuncion Church, saying in a statement, "An attack on temples and places of prayer, without any respect for God or for those who believe in Him, causes us pain."

Issued on Saturday, the statement gave voice to protesters' concerns about the government but added that violent actions like the attack on the church "prevents us from giving the right amount of attention to the claims of the majority of the Chilean people, who yearn for real and peaceful solutions."

"Along with so many Chileans," the bishops stated, "we radically oppose injustice and violence, condemning it in all its forms."

The bishops' statement goes on to say, "People are not only tired of injustice, they are also tired of violence."

People are not only tired of injustice, they are also tired of violence.

Leo Lyon Zagami tied in the protesters' raid on a Catholic church with clerical abuse scandals in Chile, stating on his blog, "Such scandals gave plenty of ammunition to the Antifa insurgents."

In comments to Church Militant, Zagami opined that "Antifa forces" have been "set in motion in Chile by George Soros and friends to push out the center-right president."

He also mentioned connections between Antifa and Satanism, saying, "We have found out over and over again that many Antifa chapters overlap the Satanic Temple ones, having the same members in their fold."

In the midst of the ongoing protests, some have called for Chilean president Sebastián Piñera to resign. In October, Piñera compared the protests and riots to a criminal organization, saying, "I call on all my compatriots to unite in this battle against violence and delinquency."

Some criticized his strong stance against the unrest, saying it only gins up anger and makes the situation worse.

For instance, Michelle Bachelet, a former president of Chile now serving as the United Nations High Commissioner for Human Rights, said she was "deeply disturbed" by allegations of police violence against protesters in her home country, and accused Piñera of using "inflammatory rhetoric."

The unrest underway in Chile is said to be the worst the country has seen in decades. Clashes between protesters and police have left 20 dead and an enstimated 2,500 injured.

In what is being called a win for the protesters, the Chilean government announced Sunday night plans to write a new constitution replacing the current one.

Catholicism in Chile has been racked in recent years by a number of clerical sex abuse scandals.

In January 2018, Pope Francis sparked anger from Chilean faithful when he dismissed allegations that Chilean Bp. Juan Barros protected a sexually abusive priest. During a trip to Latin America, the Holy Father sided with Bp. Barros, claiming the bishop's accusers lacked evidence and were smearing the Church.

After widespread backlash to the Pope's comments, he summoned the bishops of Chile to Rome for a closed-door meeting in May 2018 to discuss priest sex abuse scandals.

At the end of that meeting, all the Chilean bishops offered Pope Francis their resignations. In the months that followed, Francis opted to replace several of Chile's prelates.

The Pope removed Bp. Barros in June that year — within a month of the emergency meeting in Rome — as well as two Chilean prelates who had reached retirement age.

He accepted the resignations of even more Chilean bishops in September 2018.

In March 2019, he accepted the resignation of Cdl. Ricardo Ezzati Andrello, archbishop of Santiago.