Robert Epstein: Big Tech Will ‘Go All Out’ With Election Meddling in 2020 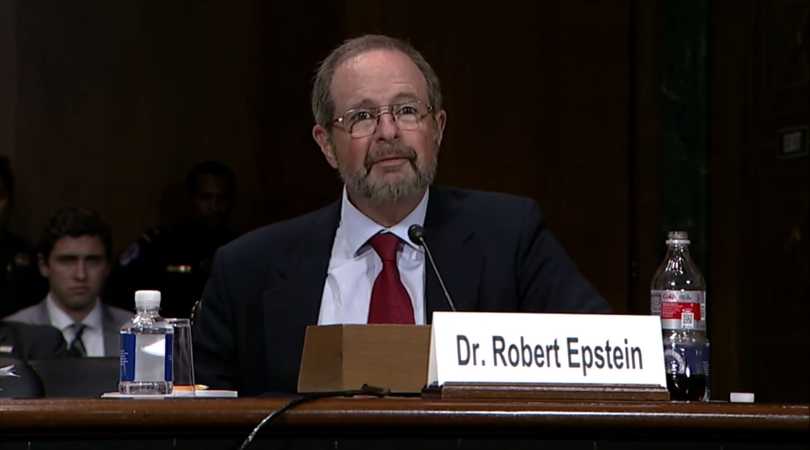 Google is manipulating voters 'on a massive scale'

Professor Robert Epstein told Senator Ted Cruz (R-TX) that Google is manipulating voters "on a massive scale," using tools that it has at its disposal exclusively, and that "no one can counteract them." Epstein warned the Senator of big tech election meddling that he called "invisible," "subliminal," and more powerful than anything he's seen in 40 years of behavioral sciences.

Epstein — who said that he personally supported and voted for Hillary Clinton in 2016 — testified before the Senate Judiciary Committee on Tuesday, where he told Sen. Cruz that Google election meddling gave Hillary Clinton at least 2.6 million additional votes in the 2016 election.

"The 2.6 million is a rock bottom minimum," said Epstein, "The range is between 2.6 and 10.4 million votes, depending on how aggressively they use the techniques that I've been studying now for six and a half years — such as the search engine manipulation effect, the search suggestion effect, the answer bot effect, and a number of others."

"They control these and no one can counteract them," added the professor, "These are not competitive, these are tools that they have at their disposal exclusively."

"I believe in democracy, I believe in a free and fair election more than I have any kind of allegiance to a candidate or a party," affirmed Epstein on Tuesday. "In 2020 — if all these companies are supporting the same candidate — there are 15 million votes on the line that can be shifted without people’s knowledge, and without leaving a paper trail for authorities to trace."