He justifies actions by claiming "unity"

ROCKFORD, Ill. (ChurchMilitant.com) - The bishop of the Rockford diocese is trying to usurp Church Tradition and is asking that "no Masses be celebrated ad orientem without his permission."

In a letter issued January 11, Bp. David Malloy called for "unity during the celebration of the Sacred Liturgy" by suppressing ad orientem Novus Ordo Masses and Traditional Latin Rite Masses. Bishop Malloy further added that neither of these would be celebrated "without my permission."

Bishop Malloy said his request may bring about architectural changes to Rockford's "beautiful parish churches." He hinted at removing altar rails, saying, "Examples of such modifications would include modifying, replacing or moving of the altar or statues, the placement of the tabernacle, Stations of the Cross or questions involving altar rails."

The High Altar that once stood in the Rockford diocese cathedral was previously removed and is now the seat of the bishop.

Catholic commentators are calling this letter ultra vires, meaning not within his power as bishop.

A 2007 Motu Proprio by Pope Benedict Emeritus XVI titled Summorum Pontificum directly contradicts Bp. Malloy's letter. Pope Benedict said, "Masses celebrated without the people, any priest whosoever of the Latin Rite, whether secular or religious, can use either the Missale Romanum issued in 1962 by Bl. Pope John XXIII."

The Pope continued, "For such a celebration according to one or the other Missal, a priest does not need permission, neither from the Apostolic See nor from his Ordinary."

When he was Cdl. Joseph Ratzinger, he called versus populum worship "a self-enclosed circle." He added, "In its outward form, it no longer opens out on what lies ahead and above, but is locked into itself." 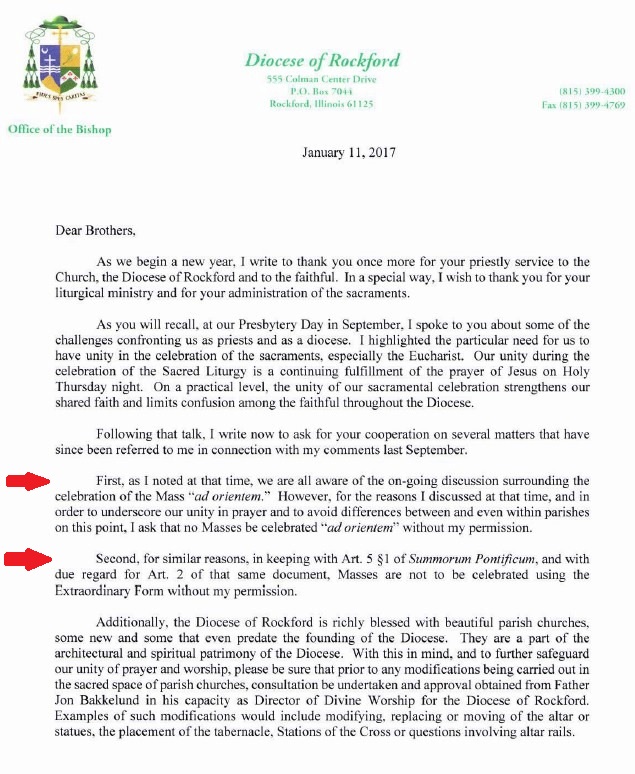 Cardinal Robert Sarah, prefect of the Congregation for Divine Worship and the Discipline of the Sacraments, set off a worldwide reaction last year when he encouraged all dioceses to start implementing ad orientem worship.

"[D]uring the Rite of Penance, the singing of the Gloria, the orations and the Eucharistic Prayer, all, priest and faithful, should turn together towards the East," he said, "to express their desire to participate in the work of worship and of redemption accomplished by Christ."

In contrast to Bp. Malloy, on September 4, 2016, Bp. Robert Morlino of the diocese of Madison, Wisconsin, announced that all cathedral Masses would be celebrated ad orientem. And Cdl. Raymond Burke, former prefect of the Apostolic Signatura, issued a similar directive when he declared that all Masses at the Shrine of Our Lady of Guadalupe in La Crosse, Wisconsin would be offered ad orientem moving forward.

In a 2012 talk, titled "Reflection on the Documents of Vatican II," Bp. Malloy said:

The reform of the liturgy that many of us have lived through and especially the Mass was one of the first decisions taken by the Vatican Council. Pope Benedict has been particularly keen since the beginning of his pontificate in emphasizing that the Mass we celebrate today, the Novus Ordo, is in continuity with the sacrifice of the Mass that has always been offered in the Church. And it's in particular continuity with the Latin Mass that many of us knew from the time before the council. The great challenge issued by the Second Vatican Council was for the appropriate but the intense participation, particularly of the faithful in the Mass. Mere attendance or unthinking responses do not do justice to our invitation to the last supper.