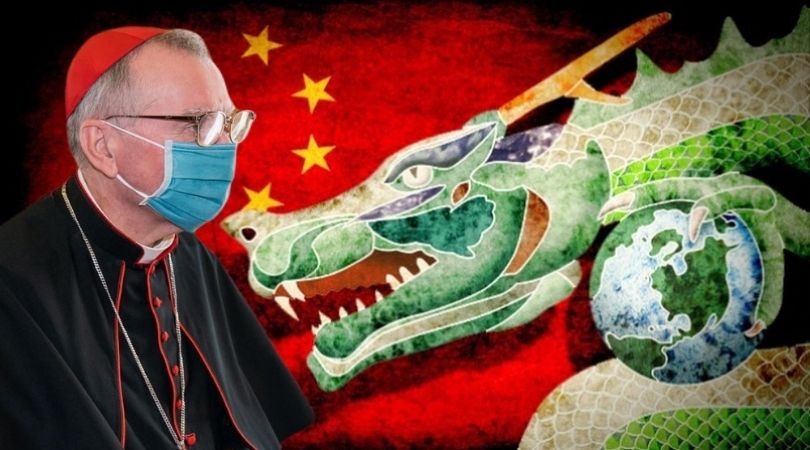 VATICAN CITY (ChurchMilitant.com) - Despite fierce global opposition, Rome has renewed its controversial concordat with China, claiming that the deal has done away with "illegitimate bishops" and resulted in securing the "communion of all Chinese bishops with the pope."

"The two parties have agreed to extend the experimental implementation phase of the provisional agreement for another two years," a Vatican Press Office statement announced.

"The Holy See considers the initial application of the agreement — which is of great ecclesial and pastoral value — to have been positive, thanks to good communication and cooperation between the parties on the matters agreed upon, " a Vatican Press Office statement announced.

Rome "intends to pursue an open and constructive dialogue for the benefit of the life of the Catholic Church and the good of Chinese people," the statement noted.

"It's done," Vatican secretary of state Cdl. Pietro Parolin told reporters, confirming the renewal of the secret agreement Thursday with separate but agreed statements from the Holy See and the Chinese Embassy in Rome.

The concordat "regarding the appointment of bishops" was signed in Beijing on Sept. 22, 2018 and took effect a month later.

'Deal With the Devil'

Damian Thompson, associate editor of Britain's The Spectator, told Church Militant that " the Vatican under Pope Francis has essentially done a deal with the Devil, betraying faithful and suffering Catholics and other Christians into the hands of their totalitarian persecutors."

"We should pay no attention to claims that this evil concordat is the work of Cdl. Parolin — dreadfully compromised though he is — and that the pope has merely been misled on this. The responsibility for this wicked act lies squarely with the pope himself," Thompson stressed.

Boasting that the deal had ended the existence of "illegitimate bishops" — i.e., prelates appointed by the Holy Father and not by the Chinese Communist Party (CCP), Parolin explained that the agreement would not be signed again but "simply extended for another two years ad experimentum."

No deals can be made with this regime: Even thinking of making deals with Beijing is crazy. It's like making a deal with the Devil.

"As of today, for the first time after many decades, all the bishops in China are in communion with the bishop of Rome and, thanks to the implementation of the agreement, there will be no more illegitimate ordinations," Vatican News reiterated.

Asked if the pact would remain secret, the Vatican's second-in-command replied: "Yes, but it is a relative secret because many contents are already known. By agreement of the two parties, the contents will be kept confidential as long as the agreement is an experiment."

Responding to a question on the persecution of Christians, Parolin remarked: "But, persecutions, persecutions ... You have to use the words correctly. There are regulations imposed concerning all religions, and certainly also concern the Catholic Church."

Only yesterday, she explained, a Canadian Parliament subcommittee described the egregious human rights violations as a genocide. But "the very next day, the Vatican renews its agreement with the CCP. Uyghurs, Christians, Tibetans and Hong Kongers will feel today that Pope Francis and the Vatican have abandoned them," she marveled.

In September, 88-year-old Chinese cardinal Joseph Zen — who was refused a meeting by Pope Francis after arriving at the Vatican — pointed out that the deal had left important dioceses without a bishop or with the impending appointment of a bishop approved by the CCP.

"The agreement concerns the appointment of bishops: Well, in two years there has been no new appointment. On the other hand, under the pretext of the agreement, seven excommunicated bishops were recognized by the Holy See," Zen lamented.

Communism is not eternal, and when it falls it will be found that the Church has collaborated with this inhuman regime; [the Church] will have no more moral authority. No deals can be made with this regime: Even thinking of making deals with Beijing is crazy. It's like making a deal with the Devil.

The cardinal expressed hope that the agreement would unify the Chinese Church and this unity would result in it becoming an "instrument of evangelization."

Earlier in October, Fujian auxiliary Bp. Vincenzo Guo resigned in protest at the deal euphemistically noting he did not want to be an "obstacle to progress" between the reconciliation of the underground and state-sanctioned Catholic churches.

A priest heading the largest underground Catholic church in Hebei province told South China Morning Post that life had become more difficult since the deal was struck, "especially for those who worship in government-sanctioned churches."

"Many of my [seminary] classmates who are serving as priests in officially sanctioned churches are feeling more heat than we do, because government restrictions focus on those operating out in the open these days," he admitted.

"The cross, the dome and other European architectural features of his church building have all been taken down," he said. "But for underground communities like us where persecution has been a constant, there hasn't been a drastic change as most of our gatherings are held inside homes."

The intercessions, offered for over 26 countries, conspicuously skipped the world's most populous nation — notorious for human rights violations and for its persecution of Christians, Uyghur Muslims and other religious sects.

The most important thing facing the Catholic Church right now is the question of relations with China. Don't let yourself get distracted.

The concordat has resulted in the communist regime "forcing Catholics from the underground to join the state-run Chinese Catholic Patriotic Association ... which is objectively schismatic," Zen lamented.

The underground Church has "practically disappeared" as a result, he added. "That's not victory, that's a defeat — a complete defeat."

In a last-ditch attempt urging the Vatican to reconsider the treaty, a bipartisan duo of U.S. senators wrote to Pope Francis Monday.

"As the leader of the world's largest institution of faith, we respectfully request that Your Holiness do all that you can to protect the most basic human rights for all people, including Uyghurs in Xinjiang," Republican Todd Young and Democrat Tim Kaine pleaded.

Commentators also suggested that news announcing Pope Francis' support for homosexual civil unions was timed to distract from the renewal of the China accord.

"The most important thing facing the Catholic Church right now is the question of relations with China. Don't let yourself get distracted," moral theologian Fr. Alexander Lucie-Smith tweeted.

Communist China cut ties with Rome in 1951, forcing Catholics to choose between the state-run Chinese Catholic Patriotic Association or underground churches loyal to the Holy See.