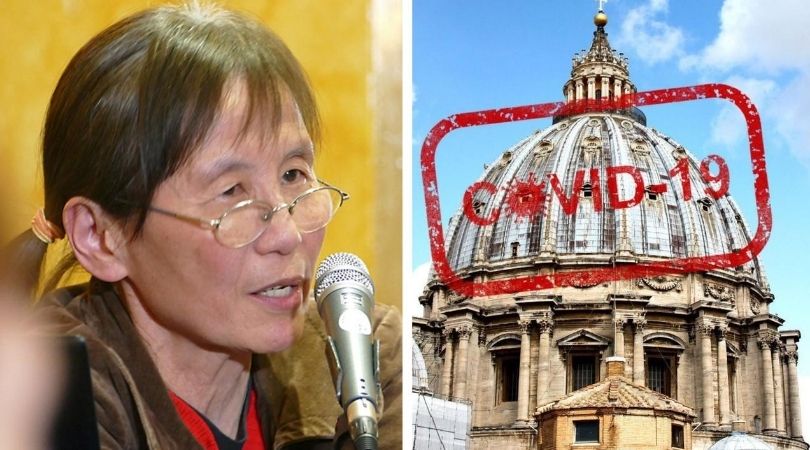 In response to criticism of pandemic document

VATICAN CITY (ChurchMilitant.com) - The Vatican has launched a personal attack on a Catholic scientist after she shredded a pontifical publication for portraying "an earthly utopia without God."

PAL lashed out at her in a tweet, refusing to addressing the scientist-theologian as Dr. Nguyen: "Mrs. Doyen Nguyen criticizes the Academy on #COVID19 as 'professor' of Angelicum. But she taught only for one year as invited. Her title as @_Angelicum professor is incorrect as her whole argument. Please read @PontAcadLife whole, not partial topics: http://academyforlife.va."

There is no mention of Christianity or Christians, let alone Catholics.

"This is a document issued from a prestigious body of the Catholic Church, yet there is no mention of Christianity or Christians, let alone Catholics," Nguyen wrote in an essay published Wednesday by LifeSiteNews.

Mrs. Doyen Nguyen criticizes the Academy on #COVID19 as 'professor' of Angelicum. But she taught only for one year as invited. Her title as @_Angelicum professor is incorrect as her whole argument. Please read @PontAcadLife whole, not partial topics: https://t.co/B8rI8vsZF9 . pic.twitter.com/pNe4BP9y7r

Dr. Nguyen reacted to the tweet in comments to Church Militant: "Truth speaks for itself irrespective of any ad hominem attacks. Hence, there is no need for me to respond to such attacks."

"This is in conformity with Christ's teaching (please see the Gospel accounts of Jesus before the chief priests and before Pilate)," said Dr. Nguyen, a lay Dominican, going on to clarify her status:

I am currently in the USA, having left Rome permanently at the end of Nov. 2019. I am no longer affiliated with the Angelicum. Lifesitenews did not ask me for a current "bio" when they requested that I write a short article for them on the subject. They used the old "bio" by mistake.

Dr. Nguyen taught at the Pontifical University of Saint Thomas Aquinas, popularly known as the Angelicum, from 2018–2019. She states her correct title while teaching at the Angelicum as Docente di Teologia (lecturer in theology).

Nguyen holds two doctoral degrees: a Doctor of Medicine (M.D.) and a Doctorate in Sacred Theology (S.T.D.) — the highest Catholic ecclesiastical degree in advanced theological study. She is widely published in peer-reviewed journals, especially on the topic of "brain death."

"These ad hominem attacks are shameful!" Marco Alessandro Solzi responded to PAL. "This is exactly the clericalism of which Pope Francis speaks: 'This is so, so, so, and if you do not do so, so, so you cannot enter.'"

"When a Vatican office responds to criticism with ad hominem arguments ... Are those the only arguments they have?" tweeted Vatican journalist Phil Lawler, the first to publish a critical commentary on the pandemic document as failing to mention even once God, Jesus Christ, the Holy Spirit, the Church, the sacraments, prayer, charity or the word "Christian."

These ad hominem attacks are shameful!

"As a Catholic faithful and a scientist holding much respect for the Pontifical Academy of Life (PAL), I began reading its latest document," Dr. Nguyen writes. "I was in for a shock, intellectually, morally and spiritually!"

The word "hope" is mentioned just six times in the 4,000-word publication, but "the document seems incapable of making any further development on this most important theme of hope," she argues.

Rather than asking us to "fix our gaze" on Christ, Who is "the object of our hope … the document seems to tell us to fix our gaze on Amazonia instead," Dr. Nguyen noted, citing PAL's vision that "the dream recently envisaged for the Amazon region might become a universal dream" to "integrate and promote all its inhabitants, enabling them to enjoy 'good living.'"

"But is it possible to put our hope in something of the created order, however an idyllic earthly paradise it might be? Is such a utopia the true and highest good for mankind?" she asked.

"Likewise, the document mentions, right at the beginning, that 'we are summoned to the courage of resistance' and, at the bottom of page 4, that we are called to 'the courage of moral conversion," she noted.

The hematopathologist, trained to diagnose diseases of the blood cells, went on to criticize the misguided message:

Why is this PAL document incapable of producing a message of hope? Hope presupposes faith. In seven pages, the word "faith" appears only once when the document alludes to those "structural dimensions of our global community that are oppressive and unjust, those that a faith understanding refers to as 'structures of sin.'" It seems rather clear that, if faith is lacking, then hope will be also lacking.

"The document speaks of moral conversion to bring about the rebirth of the human community," Dr. Nguyen observed, but "without a word about grace, the document de facto is suggesting that humans can pull themselves up by their own bootstraps to achieve conversion" — a heresy the Church condemned as Pelagianism.

"Nowhere in the document is it mentioned that God is our final end, that Christ is our hope and that we need the grace of the Holy Spirit for both our moral conversion and a good moral life. Nowhere is the Church — the dispenser of the sacraments as a source of grace — mentioned either," she noted.

It seems rather clear that, if faith is lacking, then hope will be also lacking.

"In passing over these in silence, in what way does the Academy's call for solidarity, equality, and 'access (to health care) for all without exceptions' differ from that of secular ideologies?" she asked.

Dr. Nguyen also debunks the recent rebuttal from PAL that God was deliberately omitted from the document to make it accessible to a wider audience.

"That a document is destined for all men and women is certainly not a reason for bracketing out its Catholic identity or omitting any reference to God, Christ, the Holy Spirit and the Church," she insisted.

Lamenting the "reductionist vision of a merely earthly utopia" offered by the Vatican, Dr. Nguyen suggests the "document should have invited men and women into the life of Christ; it should have offered a strong message of hope with a rich eschatological vision 'that our present sufferings are not worth comparing with the glory that will be revealed in us' (Romans 8:18)."

After Church Militant contacted Dr. Nguyen, Lifesitenews published a correction Friday: "In a bio note at the end of this article it was noted by LifeSiteNews that Nguyen is a 'professor at the Pontifical University of St. Thomas Aquinas (Angelicum) in Rome.' It's been brought to our attention that Nguyen is no longer associated with this institution, which has been the case since Nov. 2019. LifeSiteNews regrets this error."

In July, Church Militant first reported that the Vatican document on the Wuhan pandemic did not mention God, Jesus Christ, Church, Gospel, Bible or sacraments even once.

In August, Church Militant reported on PAL spokesman Fabrizio Mastrofini's defense that its publication had dropped God in order to reach "the widest possible audience.