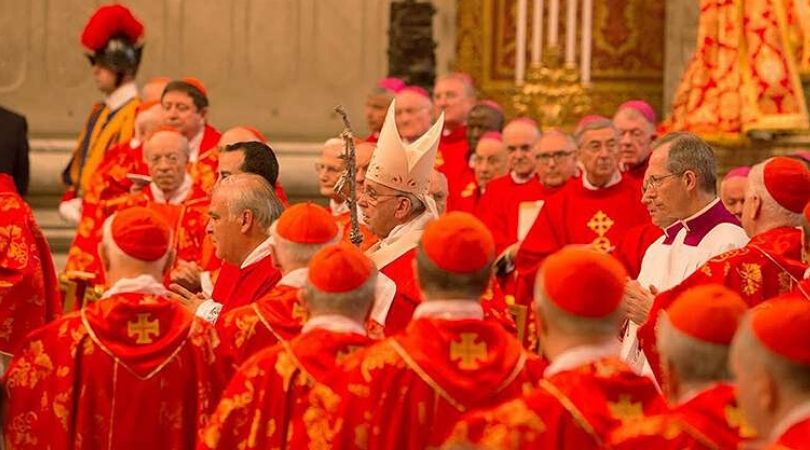 Faithful Catholics pray Francis 'does not take us over the brink'

DETROIT (ChurchMilitant.com) - Faithful Catholics will be praying during the month of November in the hope that Pope Francis will uphold Church teaching.

Across the world, the faithful have been scandalized by the Amazon Synod in Rome. The release of the synod's final document has been heavily criticized by bishops and faithful alike for its focus on liberation theology, its pushing of paganism and women's ordination, and for the ensuing confusion that it's created.

Though synod fathers are recommending these changes, it is up to Pope Francis to decide if and how they will be incorporated into the Church. How he will implement these recommendations will be outlined in his apostolic exhortation on the Synod, which is expected to be released by the end of the year.

In an opinion piece for the National Catholic Register, Msgr. Charles Pope wrote that "Pope Francis is deeply enmeshed in the Amazon Synod and its outcomes." He pointed out that Pope Paul VI was in a similar spot prior to releasing Humanae Vitae, noting: "Paul VI was no conservative and was very friendly with the agents of radical change."

Most of Christendom at the time was expecting Pope Paul VI to change Church teaching and accept the morality of contraception.

"This makes Humanae Vitae all the more miraculous," Msgr. Pope wrote. "We must allow this to give us hope now that Pope Francis will issue a document that does not take us over the brink."

In response to this reminder, and in accordance with the duty of every Catholic to pray for the pope, Fr. Richard Heilman's United States Grace Force is launching a 54-Day Rosary Novena for Pope Francis beginning Nov. 1 and ending on Dec. 24.

The intention for the novena is "May the Holy Spirit guide the Holy Father as he writes the post-synodal apostolic exhortation."

In addition to praying the 54-day Rosary Novena, those who sign up are asked to "add the force of fasting," as God calls.

United States Grace Force asks participants to implore the saints and holy souls to join them in prayer, and is hoping the novena results in "a Christmas miracle."

The Rosary Novena kicks off the month of November — a time rich with feast days and devotions that inspire meditation on man's true nature and purpose. It is designated as the month of suffering souls in purgatory and opens with the Solemnity of All Saints, a holy day of obligation, and All Souls' Day, which commemorates those still suffering in purgatory.

The All Souls Day Mass in the Tridentine form of the Roman Rite resembles a Requiem Mass; it features black vestments, Gregorian chants such as "Dies Irae," and a catafalque placed where the casket would be during a funeral Mass.

A plenary indulgence can be gained, only for souls in purgatory, if one visits any parish church or public oratory on Nov. 2 and recites an Our Father and the Credo. The usual conditions apply for the gaining of a plenary indulgence: being in a state of grace, prayers for the intentions of the Holy Father, confession and Communion and freedom from attachment to sin.

Additional plenary indulgences can be obtained for the repose of souls each day from Nov. 1–8 by the faithful who visit a cemetery and pray for the dead. Although what prayers are to be said aren't specified, those composed specifically for the dead in purgatory are often used.

One is the Litany for the Holy Souls in Purgatory. Another was composed by St. Gertrude the Great, whose feast day falls on Nov. 16, and is often considered a natural choice for the first nine days of November devotion.

There are quite a few rumors on the internet claiming St. Gertrude's prayer releases 1,000 souls from purgatory each time it is recited. Father Heilman has admitted he struggles with this claim, explaining in a blog post that there is much evidence against it.

"Such an easy way to release 1,000 souls seems inconsistent with the Church's understanding of purgatory," Fr. Heilman noted, "given that ordinarily to release one soul requires a plenary indulgence which is very difficult to get, and given all the means the Church employs to help the dead such as special masses or indulgences applicable only to the dead."

Additional indulgences can be gained later in the month on Nov. 27, the feast of the Miraculous Medal, and Nov. 28, the Feast of St. Catherine Laboure. Those enrolled in Miraculous Medal Associations under the care of the Congregation of the Mission (Vincentians or Lazarists) have the opportunity to gain a plenary indulgence.

Two additional feasts of note are Nov. 21, the Presentation of Mary and Nov. 24, the Feast of Our Lord Jesus Christ, King of the Universe.

Those wishing to sign up to pray the 54-day Rosary Novena can do so here. Details on how to pray the novena are here.