SAGINAW TOWNSHIP, Mich. (ChurchMilitant.com) - A Michigan diocese is reeling after reports that a number of its active priests may be sex abusers.

Father Robert DeLand, judicial vicar and a judge on the marriage tribunal in Saginaw, was arrested Monday after a months-long undercover investigation revealed he was grooming young men for sexual abuse. One victim, a 17-year-old male, cooperated with police in the covert operation, which resulted in the arrest for sexual assault. DeLand is being charged with attempted second-degree criminal sexual conduct and gross indecency. In another case in Tittabawassee Township involving a 21-year-old male victim, the priest is being charged with one count of second-degree criminal sexual conduct, which carries 15 years in prison.

The detective said five or six other clergy are being accused.

Since DeLand's arrest, the Tittabawassee Township police department has been "inundated by a number of calls from individuals alleging similar acts over the last 30 years."

But further tips from alleged victims are revealing that other clergy may also be implicated.

"We are getting tips on other priests," said Det. Brian Berg of Tittabawassee Township, where DeLand was arrested. "I would imagine when we verify some of the information we're getting, that other priests will be under investigation."

The detective said five or six other clergy in Saginaw are being accused.

In a press conference last week, Berg said of DeLand's case, "What I've seen through this last four-month investigation is detestable. And I've been doing this for 35 years. It's detestable."

A History of Abuse

According to reliable inside sources, DeLand's sexual activities were an open secret.

"His escapades with boys were much more open at Holy Family, Ss. Peter and Paul, and St. Stephen," the source said, who has asked to remain anonymous.

Marlene Bethune, former housekeeper and cook at Ss. Peter and Paul Parish in the 1990s, told Church Militant, "There was a constant stream of young men and boys coming and going, as well as parties that often left the rectory trashed."

She recalled once seeing a naked man lying in DeLand's bed.

"On some weekends, he'd have several guys that stayed over," she told Church Militant. "One Monday, I came in to clean ... so I went upstairs and opened up his bedroom door to go in and to clean, and I was quite shocked to see a naked man in his bed."

The man was still asleep and had kicked off the covers, exposing himself. Although Bethune told staff about the incident, nothing ever came of it.

Peggy Schambeck, housekeeper at St. Agnes, said DeLand always took a keen interest in teenagers. She recalled in particular a boy of around age 16 helping out at the rectory one day.

"It was weird because he wanted this young man to come over and move stuff in his bedroom and clean off his dresser," Schambeck told Church Militant. "And I thought, why is he having him come over and do this? I'm his housekeeper, I can clean his dresser off."

The priest asked the boy to return later in the evening, but the boy said he had to help his parents with something, and Schambeck never saw him again.

"It was just a gut feeling, but I thought, why is he wanting this boy to help around here?" she continued. "And I thought, good, this boy is not coming back here."

Police are confirming the priest's "questionable behavior" with teens.

"Throughout the years, some of the things he would do with young boys, such as inviting them to his home, was somewhat strange," said Saginaw Township Police Chief Donald Pussehl.

Pussehl said his department has received at least five phone calls about DeLand since his arrest.

Mary Woods, lector at St. Agnes, told Church Militant Fr. DeLand had "two faces." "To the general public he was wonderful," she said of the popular priest, but those who worked with him were subject to frequent, violent outbursts of anger over minor issues. According to Woods, DeLand "had a temper."

She was also aware of rumors surrounding the priest involving teenage boys.

"I had heard stories from the neighboring town where I grew up, where the high school was, a lot of people saying, 'He's been with those boys, it's all going to come out,'" Woods told Church Militant. "They'd say, 'There are stories of him taking these kids on trips and stuff; we believe he's giving them alcohol.'"

According to her, she had been hearing these rumors "for the last five, six years."

Only a week before his arrest, Fr. DeLand said in his homily at Mass that he has a great "passion" for the youth.

"I love them. I love them with all my heart," he added." And they are a dear passion of mine."

Police confirm that, in addition to DeLand's two male victims, about half a dozen other potential victims have stepped forward claiming they were all minors when DeLand abused them. All but one are male.

'A very, very, very real passion in my life are the young people,' DeLand said.

In fact, police have received "dozens and dozens" of tips about DeLand. "We're trying to get our hands around the enormity of it and put it into some kind of logical order," Det. Berg commented.

The diocese of Saginaw issued a statement Thursday clarifying that DeLand, who has been placed on administrative leave, may not be near children.

Bishop Cistone has mandated that Father DeLand must meet all the obligations of the courts, including the critically important directive that he is to have no contact with individuals under 21, for the well being, safety and protection of our community and most especially young people. This prohibits Father DeLand from going on school properties and participating in school and parish activities and functions.

In addition, Bishop Cistone has informed Father DeLand that he must refrain from wearing clerical garb or presenting himself publicly as a priest. He must also refrain from the exercise of public ministry and must notify the Office of the Bishop of any change of location.

Freeland Community Schools has also barred the priest from their property.

The 71-year-old priest, who has been in ministry for 45 years, was released on GPS tether last week, and a preliminary hearing is set for 2:30 p.m. on March 19 in Judge David Hoffman's courtroom at the Saginaw County District Court.

The diocese of Saginaw is headed by Bp. Joseph Cistone, installed in 2009. Before coming to Michigan, Cistone was auxiliary bishop in Philadelphia, where he was intimately involved in helping in the cover-up of sexually abusive priests.

An attorney for one of the accused priests — Msgr. William Lynn, who was eventually arrested — claimed that in 1994, Cistone watched as documents were shredded containing names of suspected sex abusers, and then Cistone went on to mislead a grand jury about the cover-up.

The case involved 35 accused priests in the archdiocese of Philadelphia, with evidence that Cdl. Anthony J. Bevilacqua had ordered the destruction of documents containing their names. Cistone, as assistant vicar for administration, was aware of many of the reports on abusive priests.

According to the 2005 grand jury report, Cistone silenced a nun who tried to report priestly abuse to parishioners in 1996.

A nun in Saint Gabriel, Sister Joan Scary, expressed concerns about the safety of children in her parish who were exposed to a priest convicted of possessing child pornography. After she tried to pressure the Archdiocese officials to act and began talking to parents, she was fired as director of religious education.

Lynn informed Cistone that the nun's religious superiors had ordered her to be silent, after pressure from the archdiocese. "Everything is quiet at Saint Gabriel Parish concerning this situation," Lynn told Cistone. The nun eventually left Philadelphia.

The grand jury report also confirms that Fr. John J. Delli Carpini, with a known history of molesting boys, was made speech writer for the cardinal on Cistone's recommendation. A March 21, 2000 memo authored by Cistone proposed that the assignment be concealed from the public "for purposes of his 'personal' issues." Carpini was later placed on administrative leave over his abuse.

Cistone also justified the continued ministry of another sex-abusing priest, Fr. David Sicoli, the only priest assigned to St. Anthony in South Philadelphia. According to the report, Cistone claimed that being the sole priest "meant that, by necessity, Fr. Sicoli be in charge of any youth programs and altar boys. It also meant there were no assistant priests to observe and report any improper relationships or behavior." Sicoli was eventually removed from ministry after overwhelming evidence of abuse of multiple boys.

In spite of being aware of one priest's sadistic behavior towards boys (Fr. Thomas Smith was known to whip or prick young boys with pins until they bled, and was accused on at least one occasion of fondling one boy's genitals), Cistone agreed to keep him at his parish assignment, which included access to boys at the grade school:

The Archdiocese leaders left Fr. Smith in his parish assignment despite reports, found to be credible, of sadistic behavior and manipulative efforts to see boys’ genitals, as well as reports of genital fondling of a victim still too embarrassed to come forward publicly. Instead of ordering meaningful psychological testing that could well indicate otherwise, Cardinal Bevilacqua and his managers apparently chose to accept Fr. Smith’s assertions that the whippings he directed, the pricking of naked boys with pins, and his manipulations to bathe nude with the grade school children in his parishes, served some purpose other than sexual gratification.

And on one occasion, Cistone discouraged Cdl. Bevilacqua from meeting with an abuse victim, claiming such a meeting would be "setting a precedent."

Later, after Cistone's activities were made public, he said he regretted "any mistakes in judgment," but refused to discuss anything further, as "it would not serve any purpose to revisit the grand jury report and endeavor to recall the rationale for past decisions made in specific cases."

Cistone's behavior led a group of children's rights advocates to press the Saginaw bishop in 2012 to answer questions about his past conduct, but he declined to comment. Cistone was never criminally charged.

Church Militant asked the diocese whether it had any knowledge of DeLand or other priests' past sexual activities, but received no direct response to the questions, instead receiving official statements claiming the diocese was fully cooperating with the criminal investigation.

*This article was corrected on 7/29/2018 to clarify that Marlene Bethune worked at Fr. DeLand's parish in the 1990s 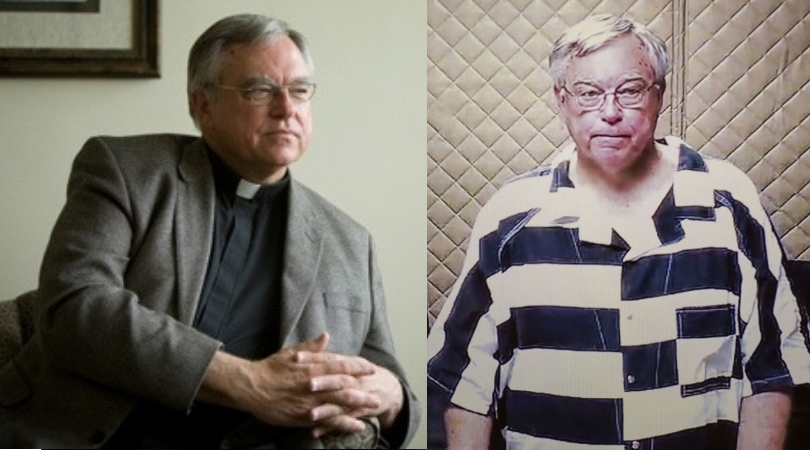 Hearing Is Believing
By Church Militant   •   0