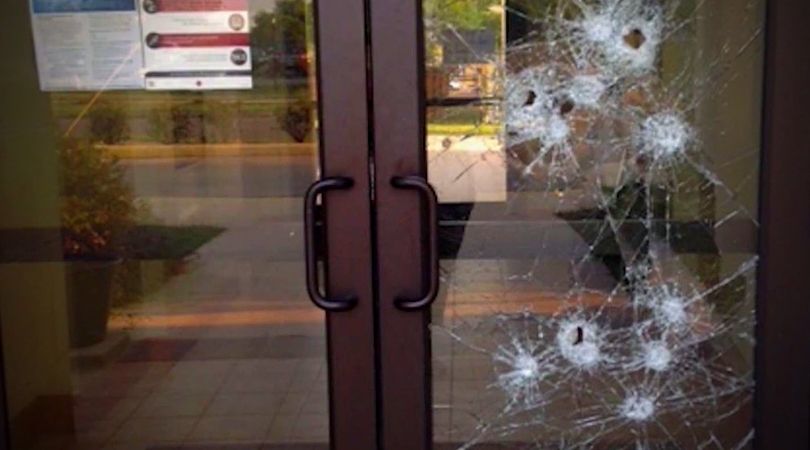 SAN ANTONIO (ChurchMilitant.com) - The Catholic Church is once again bearing an assault on her most revered objects — and with scant media coverage.

Assumption Seminary in San Antonio was attacked last week. A vandal smashed the feet of Jesus on the main crucifix and draped a black San Antonio spurs jersey over the head of the crucified Jesus. Reportedly the perpetrator pounded on glass seminary doors with a bat or comparable object.

Ian Matthew Hernandez, a Catholic lay leader in San Antonio, told Church Militant he was "shocked" when he heard the news. "No matter how much of this stuff happens all around the world, I don't think it really hits you until it happens close to your home," he said.

"What this act of heresy tells me is that the Devil is bringing the fight to the Catholic faithful of San Antonio," Hernandez said. "And I can't speak for anyone else but myself, but if it's a fight he wants, then it's a fight he will get!"

Hernandez is not alone in seeing the physical assault on the seminary as part of the spiritual war being waged on the Church.

"This is an attack on Christ, who is God," an anonymous tipster told Church Militant.

The tipster, who is affiliated with Assumption Seminary, said he did not want to disclose his identity because "we were told by the people above us not to talk to the media."

The people above us told us that the attack of a seminary building and the attack of a crucifix was "blown out of proportion." I'm sure these bishops and clergy wouldn't say the same if a mosque or a synagogue got attacked! I'm sorry, but if you do that, that's a huge deal.

They also don't want to 'pass judgment,' which is obviously an absurd position, because they desecrated a crucifix. If people at the highest levels had more of a backbone and were willing to condemn this obvious hate crime more strongly, I'm sure [news about] it would have gotten out more.

The observation of the young man who is part of the campus community is corroborated by a post made on the seminary Facebook page. It reads: "Since we do not yet know who the person is or their motives, please refrain from rushing to judgment but please pray for us and for the perpetrator."

Church Militant contacted Jordan McMorrough, communications director for the San Antonio archdiocese, for comment about the vandalism and the archdiocese's reaction. McMorrough confirmed damage "to an outdoor crucifix and five glass doors of the discernment house on campus." He further confirmed the San Antonio police department is "currently investigating the incident and are searching for a suspect."

The desecration ... reflects the growing wave of anti-Catholic attacks sweeping the United States.

The San Antonio Police Department (SAPD) told Church Militant on Monday there were no updates but supplied the apostolate with this "preliminary information":

An SAPD officer was contacted by a Reporting Person (RP1) at the listed location [2621 W. Woodlawn], advising him that an unknown male had been seen walking through the archdiocese of San Antonio property swinging an object. The RP1 witnessed the suspect (SP) randomly swinging the object around and hitting several doors at the location causing the window panels to break. The SP also struck a statue causing damage. The SP had already left prior to the report being taken. A uniformed evidence detective made the location and took pictures of the crime scene and collected [an] article of clothing that was possibly dropped by the SP. This case is an active investigation.

The desecration of the San Antonio seminary reflects the growing wave of anti-Catholic attacks sweeping the United States.

In recent months, Church Militant has reported on multiple instances of vandalism and sacrilege, including:

The anonymous tipster weighed in on the number of attacks across the country at this particular time:

The increase in desecration of Catholic churches around the country is undoubtedly the result of the spiritual warfare being waged around us in our nation. This year is a battle of good and evil, and this is manifesting in the election, and in particular the new Supreme Court battle [to replace the late Justice Ruth Bader Ginsburg]. The reason this is all increasing in an election year is because the president, while not Catholic, is fighting for things that Catholics believe in, especially for the innocent lives of the unborn.

He suggested prelates warn the latest vandal about the most important repercussion: "They need to publicly call out the person who did this and tell them to repent and admonish them of the eternal consequences of their actions."

Our Lady of Guadalupe is huge around these parts, and we don't take too kindly to blasphemous crimes against her Son.

Hernandez said he is prepared to counterattack based on two fronts. "Our Lady gave us the perfect weapon for the spiritual side of things — the Rosary," the San Antonio layman said. "Our Lady of Guadalupe is huge around these parts, and we don't take too kindly to blasphemous crimes against her Son."

He said the vandalism has hit a deep nerve, saying, "[a]ll I will say is — this is Texas. I think the general response from people just knowing the city will be anger even more than sadness. Catholicism is still very culturally strong in Texas ... and most certainly within San Antonio."