SAN DIEGO, Calif. (ChurchMilitant.com) - The bishop of San Diego, California is calling faithful Catholics who criticize the LGBT agenda a "cancer" in the Church. In an op-ed published Monday in America (where Fr. James Martin, S.J. is editor-at-large), Bp. Robert McElroy blasted critics of the celebrity Jesuit as fostering campaigns of "homophobia" and "bigotry."

"This campaign of distortion must be challenged and exposed for what it is," the bishop lamented, "not primarily for Father Martin's sake but because this cancer of vilification is seeping into the institutional life of the church."

He specifically referenced recent cancellations of Martin's speaking events, which Martin blamed in part on Church Militant's reporting. Since then, Martin has called on the institutional Church to censor the opposition.

"The concerted attack on Father Martin's work has been driven by three impulses," McElroy asserted in his opinion piece, "homophobia, a distortion of fundamental Catholic moral theology and a veiled attack on Pope Francis and his campaign against judgmentalism in the church" — thus painting critics of Fr. Martin as enemies of the pope.

Taking Pope Francis' words "Who am I to judge?" out of context, McElroy writes, "The controversy over [Martin's book] Building a Bridge is really a debate about whether we are willing to banish judgmentalism from the life of the church." The "judgmentalism" being referenced involves Church Militant's call for chastity for all, including for homosexuals — a mandate of Church teaching.

Yet the San Diego bishop dismissed what he sees as an overwrought focus on chastity. "[C]hastity is not the central virtue in the Christian moral life," he declared. "Our central call is to love the Lord our God with all our heart and to love our neighbor as ourselves."

It's a repeat of what McElroy said in June 2016, after the shooting at a gay nightclub in Orlando, Florida that left 50 dead. Chastity "does not have the uniquely preeminent role in determining the character of a disciple of Christ nor one's relationship with the church," he remarked then.

The Catechism in paragraph 2346 states, "Charity is the form of all the virtues. Under its influence, chastity appears as a school of the gift of the person." It continues in paragraph 2348: "All the baptized are called to chastity."

Both McElroy and Martin have said the language of the Church on homosexuality must change. According to McElroy, the Catechism's description of same-sex attraction as "disordered" is "very destructive language that I think we should not use pastorally."

Martin has advocated discarding the term "disordered" from the Catechism altogether and replacing it with "differently ordered," effectively normalizing the behavior in the Church.

McElroy also wants the term "intrinsic evils" dropped from the vocabulary of the Church, claiming the notion of intrinsic evils is an ineffective guide for Catholic voters. His comments came during the 2016 presidential election, when he stated that bishops should refrain from directing the faithful how to vote.

Father Richard Perozich, a San Diego priest who published a bulletin making clear Catholics could not vote in good conscience in line with the Democratic Party, was quickly marginalized by Bp. McElroy, who forbade the priest from publishing anymore columns in the parish bulletin.

"I had put other theological opinions in on Islam, sexuality," Perozich explained to Church Militant at the time. "He [the bishop] said that these were anti-gay, anti-Muslim."

Perozich is now retired and no longer in active ministry. (Although the bishop did not force him into retirement, the priest makes clear McElroy was quick to accept his resignation.)

McElroy was among the first bishops in the nation officially to open up Holy Communion to the divorced and remarried, implying as well that active homosexuals were also welcome, following a diocesan synod on how to implement Amoris Laetitia, Pope Francis' apostolic exhortation on marriage and the family.

During his Sunday homily closing the synod, the bishop went so far as to say that sometimes "God is asking me to do the opposite" of Church teaching. He also stressed the primacy of conscience as the main factor in making moral decisions.

"Many Catholics tend to think of our moral life as being rule-oriented," McElroy said. "Rules are important primarily as a check on rationalization. The real core of Catholic teaching is and always was a decision of conscience." 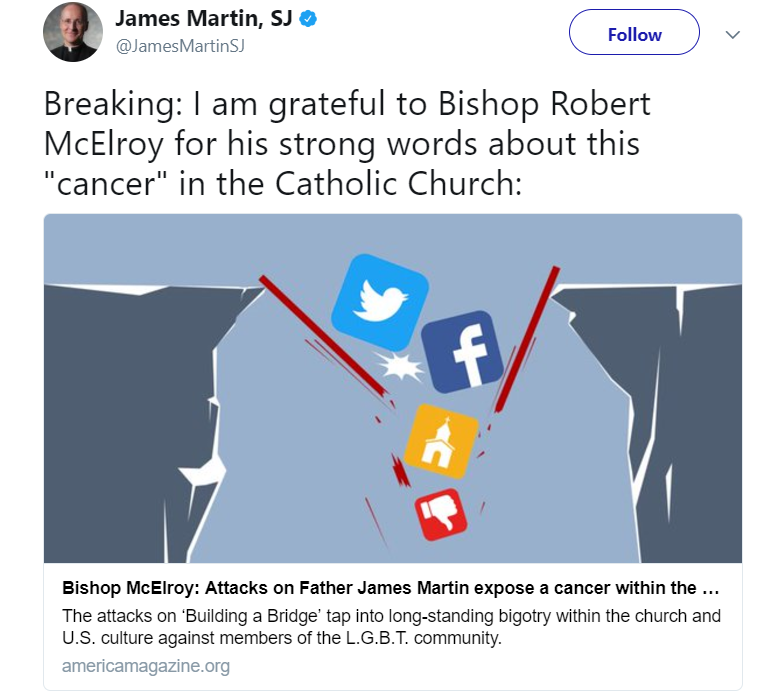 Father Martin is expressing gratitude to McElroy for coming to his defense. "I am grateful to Bishop Robert McElroy for his strong words about this 'cancer' in the Catholic Church," he tweeted Monday.

Martin has said Catholics should "reverence" same-sex marriage. At a September 5 symposium at Jesuit Fordham University, the Jesuit priest said, "I have a hard time imagining how even the most traditionalist, homophobic, closed-minded Catholic cannot look at my [active homosexual] friend and say, 'That is a loving act, and that is a form of love that I don't understand but I have to reverence."

Martin's book Building a Bridge has come under fire from several bishops as well as a number of laymen for failing to discuss Church teaching on chastity for homosexuals.

Cardinal Robert Sarah, head of the Congregation for Divine Worship, reminded his audience of a key fact omitted from Martin's book: homosexual acts are "gravely sinful and tremendously harmful to the well-being of those who partake in them."

In defense of this omission, Martin wrote, "I am no moral theologian and did not want to enter into a discussion about church teaching on sexual activity."