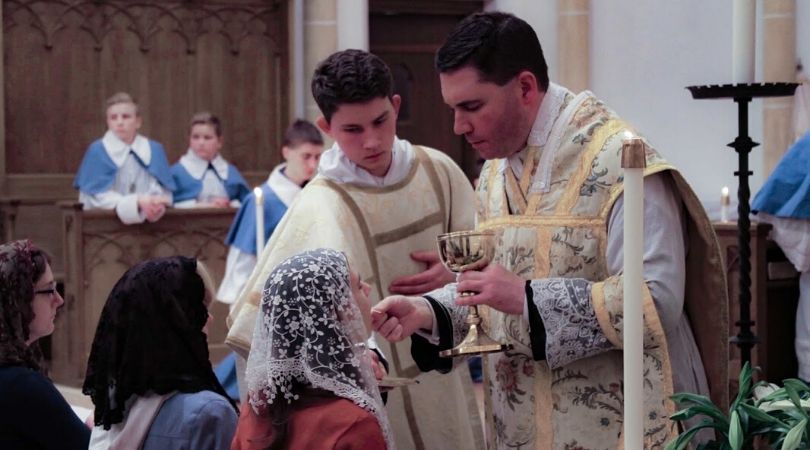 Priests must bring the Eucharist to the faithful

Unprecedented, hostile and canonically violating new "norms" are being introduced in dioceses and parishes across the country that are depriving Catholics of their right to receive the sacraments, particularly the Eucharist, in a reverent and respectful manner. The faithful are being instructed to receive Holy Communion exclusively in the hand, often behind slipshod plexiglass barriers, in a manner that is profane and grossly lacking in reverence.

Catholics who have a sincere, heartfelt devotion to the Eucharist often abhor the notion of receiving in a way they perceive to be a form of desecration — in the hand. Many firmly believe in the teachings of the angelic doctor, St. Thomas Aquinas, who eloquently instructed us:

[O]ut of reverence towards this sacrament, nothing touches it but what is consecrated; hence the corporal and the chalice are consecrated, and likewise the priest's hands, for touching this sacrament. Hence, it is not lawful for anyone else to touch it except from necessity, for instance, if it were to fall upon the ground, or else in some other case of urgency" (Summa Theologiae, III, 82, 3).

The preference to exclusively receive the Eucharist from a priest, while kneeling, and on the tongue has been accommodated throughout the last 2000 years, including during the plague and other pandemics with vastly higher mortality rates, and there is no reason for this to change now.

Priests across the country have been instructed that they are no longer required to engage in any ministry activities that they believe endanger themselves or others. Unfortunately, carried to its logical conclusion, this means that no priest should ever do anything pastoral in nature again, because there is real and inherent risk in everything that a priest is called to do.

Visiting the sick, particularly in a hospital, incurs the risk of contracting a plethora of germs including staph, E. coli, C. Diff, Hepatitis A, B and C, influenza, MRSA, norovirus and other bacteria. Likewise, prisons are known to have a high rate of Hepatitis B and C, HIV, syphilis, gonorrhea, chlamydia, tuberculosis, staph, influenza, and varicella, all of which are extremely contagious and deadly.

We need manly, brave, courageous priests willing to accommodate the faithful who wish to receive on the tongue without unwarranted, hysterical and irrational fear for their safety.

Schools should be avoided with earnestness, both because of the prevalence of the rotavirus, norovirus, staph, influenza, strep, pneumonia, and mononucleosis, but also because the scandal has left many priests as targets for potential lawsuits. If infection control is a greater priority than sacramental distribution, priests who are unwilling to say Mass or distribute the Eucharist on the tongue out of fear of a virus should be compelled to cease partaking in all other pastoral activities.

We need manly, brave, courageous priests willing to accommodate the faithful who wish to receive on the tongue without unwarranted, hysterical and irrational fear for their safety. Given the non-lethal and relatively rare occurrence of this virus, priests should be encouraged to look to the lives of the saints for inspiration in overcoming any fear or apprehension about bringing Jesus to the people.

There are so many acts of heroism among sainted priests who allowed themselves to be placed in danger — even mortal danger — in order to bring the Eucharist to the people. For example, during the plague, St. Charles Borromeo increased, rather than decreased or eliminated, the number of Masses he said.

Likewise, St. Henry Morse — one of the 40 Martyrs of England and Wales — while training to become a Jesuit simultaneously cared for those stricken with the plague. Even after contracting the plague himself, he continued to raise money for food and medicine for the poor in his care, and as a result was arrested, tried, convicted, condemned, imprisoned, hanged, drawn and quartered.

Saint Roch worked tirelessly to care for and even cure plague victims in Italy by making the Sign of the Cross on their heads. He ultimately contracted the plague and was forced into exile with only a dog as his companion.

Finally, St. Aloysius Gonzaga would physically carry sick people to hospitals and personally care for them and feed them, all while training for the priesthood, and died when he was 23. These heroic priests thought nothing of their own safety or comfort while providing for the bodily and spiritual needs as well as the eternal salvation of the souls in their care.

Sanitation should not trump sanctification.

The fact remains that receiving on the tongue is safe, hygienic and reduces the likelihood of either the communicant or priest contracting the Wuhan virus or any other disease. Receiving in the hand carries far more risks, as communicants' hands have most likely touched pews and other surfaces, only to then touch their eyes, nose and mouth, increasing the likelihood of the transmission of germs.

Regardless of the health implications, it is most important to note that in the history of the Church, there is no known occasion where anyone has ever been made ill by receiving the Eucharist on the tongue, or receiving in any fashion, which makes arguing about how to receive all the more absurd. While the Church does not teach that the Eucharist is miraculously able to avoid carrying germs or diseases, the faithful have no rational reason to fear that the Eucharist will be responsible for their contraction of any illness.

Bishops should consider resurrecting the ancient tradition of receiving on the tongue while kneeling. This approach would solve the overall dilemma, as it would remove the face to face issue, eliminate the transmission of germs from hands to mouth and be reverent in the process. Rather than instituting insulting policies that challenge and diminish respect for Jesus in the Most Holy Sacrament, it would be prudent and timely to return to a practice that respects both the body and soul of the communicant.

Sanitation should not trump sanctification. Catholics need strong, valiant, fearless priests to provide spiritual medicine for their souls, rather than cheap, Clorox wipes for their pews. The exclusive and primary concern of all priests should be caring for the desperately unfulfilled spiritual needs of their parishioners, not fretting over social distancing or irrational, unrealistic and untested guidelines that are nearly impossible to successfully implement.

Providing for the sanctification of souls is far more important than the sanitation of the physical plants. The Eucharistic presence — the Real Presence of Christ in the Eucharist in His Body, Blood, Soul and Divinity —should not be compromised or offended by preventing the faithful from receiving Him in the most reverent manner possible, on the tongue.

Shannon M. Jones is a wife and mother of 7 children. She has worked in politics, education and religion — for the U.S. Congress as a congressional aide, as director of religious education for a large parish, and as creator, developer and publisher of the popular online Catholic education program, CatechismClass.com. She resides in State College, Pennsylvania.