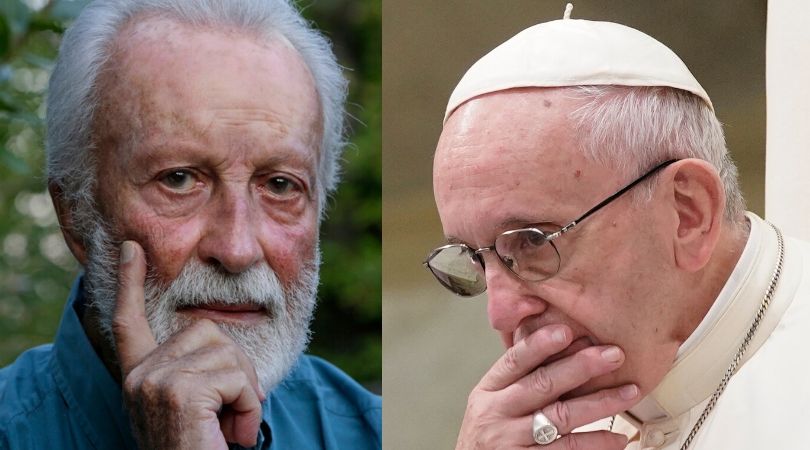 ROME (ChurchMilitant.com) - In a new series of troubling revelations, Italian journalist Eugenio Scalfari has quoted Pope Francis as denying the bodily resurrection of Jesus in stating that the crucified Christ emerged from the tomb as a spirit rather than as a body.

In a front-page article in Tuesday's La Repubblica, Scalfari expands on his earlier quote from Pope Francis, where the Holy Father is interpreted as rejecting the divinity of Jesus while on earth, and dovetails that statement with Francis' alleged denial of Christ's bodily resurrection.

According to Scalfari, Pope Francis said, "He [Jesus] was a man until he was put in the sepulchre by the women who restored his corpse. That night in the sepulchre the man disappeared and from that cave came out in the form of a spirit that met the women and the Apostles, still preserving the shadow of the person, and then definitively disappeared."

That night in the sepulchre the man disappeared and from that cave came out in the form of a spirit that met the women and the Apostles.

As already stated on other occasions, the words that Dr. Eugenio Scalfari attributes in quotation marks to the Holy Father during the interviews he had cannot be considered as a faithful account of what was actually said, but rather represent a personal and free interpretation of those who listened, as appears completely evident from what is written today regarding the divinity of Jesus Christ.

"The Scalfari claims about Francis' heretical beliefs are so shocking, and the Pope's adamant silence so incomprehensible, we have to assume that this is an accurate account of their conversations, U.K. Deacon Nick Donnelly told Church Militant.

"Scalfari's claim that Bergoglio is a Docetist — someone who holds that Jesus only appeared as a phantasm or spirit — takes us into the territory of needing an Ecumenical Council to condemn him and uphold the Catholic doctrine of the Resurrection," he said.

Scalfari's La Repubblica article is a reproduction of his introduction in his book.

The journalist, who admits to being an unbeliever, insists that he is nevertheless "very much interested in the history of the Church that began when Paul fell from his horse while going from Jerusalem to Damascus."

Drawing a wedge between Pauline Christianity as a radical innovation compared to the Jewish Christianity of Jesus' first apostles, including Peter, Scalfari identifies Jesus' recognition of His divine Sonship at the age of 30.

"Until he was 30 he had remained in the family but it is at that moment that he discovers in himself the Son of God descended to earth for the redemption of men from all over the world," Scalfari writes.

Because Saint Paul interpreted Christianity as totally different from Judaism, Christianity now saw itself as unique "without being confused with other religions." This gave rise to a number of controversies, chief of which was the relationship of Jesus to the Father.

"The Son had the same powers as the Father but there was a substantial difference between them: the Father had created the Son, after which the powers were the same but the Son was Creature while the Father was Creator," he remarks.

It is in this context Scalfari elaborates on his meeting with Pope Francis.

"I was personally responsible for speaking with Pope Francis in our first meeting four years ago, and His Holiness, who is very prepared in these matters," told him that "God, who is Unique to all the people of the whole world, decided on his incarnation to help humanity to believe in the hereafter and to behave appropriately in thinking and acting."

Then, Pope Francis reportedly told Scalfari: "That is, he is a man: true and total, and he shows it in the last week spent in Jerusalem, at the last supper, in the Garden of Gethsemane where he prays to God to exempt him from being crucified, but God does not answer him."

"Also on the cross he is a man who turns to what he calls the Father and almost reproaches him by saying: 'Father, Father, you have abandoned me,'" Francis reportedly said.

Italian social media has erupted in shock at the new revelations.

Italian social media has erupted in shock at the new revelations.

"Scalfari continues to attribute to Bergoglio quotes that contain unheard-of theological enormities and no one from the Vatican cares in the least of denying, nor do they tell Scalfari to stop. Catholics think: those who keep silent agree," tweeted noted Italian journalist Antonio Socci.

"Pure heresy: the risen Jesus was not a Spirit but was alive in flesh and blood. Thomas put his finger in his wounds," an Italian Catholic tweeted back.

Scalfari commends Francis for preaching this interpretation "with the strength that no one else has employed," as it "corresponds to a reality that our mind can only judge perfectly logical for those who believe in a deity."

Pope Francis has solved the problem of religious plurality because he is not thinking of a God monopolized by only one group, Scalfari explains.

"There cannot be a supreme deity generated only by a group of faithful while other groups have different deities," and "these are differences that must be overcome."

"Thinking of a God owned by a people and not others is meaningless, and the Pope is denying it day by day, and not only with words but with facts: He embraces Muslims, obviously embraces Jews and Protestants," he adds.

Explaining why he treats both Pope Francis and Cdl. Martini in one book, Scalfari notes that "both priests addressed issues of the highest cultural, religious and even political level in the sense in which politics has a positive or negative influence on the life of men."

Moreover, Martini was a great friend of Pope Francis in Argentina and, like Francis, had tried to modernize the Church. "Martini knew that the Church needed profound changes," writes Scalfari.

A companion piece in La Repubblica written by Italian philosopher Roberto Esposito suggests that Martini also supports the idea of Jesus' spiritual rather than bodily resurrection.

"The resurrection of the spirit — states the cardinal in one of the highest moments of the dialogue with Scalfari — it is the flame that drives the wheel of the world," Esposito writes.

Esposito relativizes the Resurrection: "The resurrection is not only the dead, in the unfathomable mystery of faith. It can also involve the living, whenever the love of neighbour wins over self-love. In this second sense we rise again, we can rise again, with respect to the hell of egoism, at every moment, on the part of each, even of the worst of sinners."

Esposito praises Scalfari's book for examining Francis' "relationship with politics and therefore with power" as "the other front on which all the novelty of the pontificate of Francis is measured."

This position of Francis is "revolutionary" and "an exercise that looks like a real battle outside and inside the Church."

"Outside, in defense of those who are abandoned, discriminated against, rejected by the protected areas of the world. Inside the Church, against the powers that, putting the interests of the ecclesiastical institution in front of her and remove her from her pastoral mission," Esposito observes.

Martini, a biblical scholar and Jesuit who died in 2012 as the archbishop of Milan, was suspected of being a member of the Italian Freemasonry.