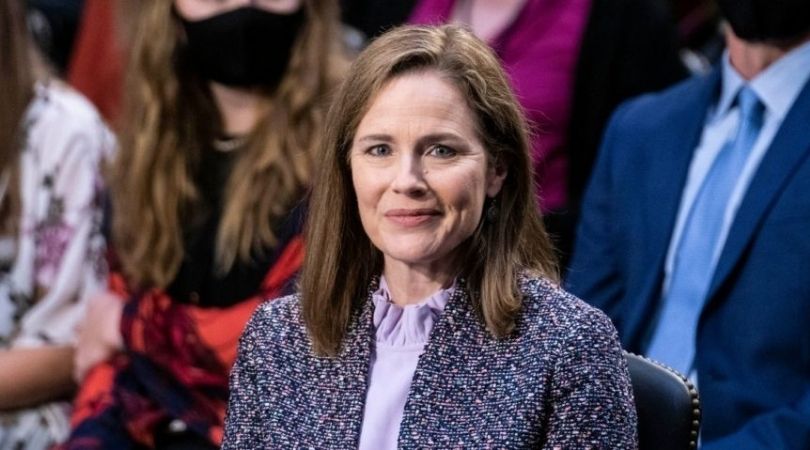 Barrett deft in response to questioning

On the third and final day of questioning of the nominee President Trump has tapped to fill the vacancy left by the late Supreme Court Justice Ruth Bader Ginsburg, Barrett sat for nearly nine hours of questioning — again without notes. The Catholic mother of seven at times more resembled a teacher patiently explaining the basics of law and judicial philosophy to students than a peer speaking to equals.

Observers saw a different Barrett this time from the wide-eyed, at times flustered nominee of 2017, when she endured grilling for a seat on the 7th U.S. Circuit Court of Appeals. The Barrett of 2020 — with three years on the federal bench, having experienced the anti-Catholic hostility of her prior confirmation hearings, having witnessed the public crucifixion of Justice Brett Kavanaugh — came before the Senate panel with a noticeable toughness and calm resolve.

Nothing the Democrats threw at her could stick.

Nothing the Democrats threw at her could stick.

When Connecticut Democrat Richard Blumenthal tried to catch Barrett in an apparent double standard by comparing her reticence on the 1965 birth control case Griswold v. Connecticut to her forthright opinions that Brown v. Board of Education was correctly decided, the 48-year-old judge explained the disparity.

"The reason why I expressed a view on Brown to Sen. Graham is that I think what I have said in print, either in my scholarly work or judicial opinions, is fair game," she said. "And I have expressly said in the past in the originalism lecture that I've given repeatedly that Brown was correctly decided."

Griswold, in contrast, has not been a case Barrett has written on. Its reasoning on "substantive due process" is also controversial and widely criticized by legal scholars.

At times, she pushed back. Senator Dick Durbin, the Democrat from Illinois who famously asked her in 2017 for a definition of "orthodox Catholic," insinuated that she may be racist simply for failing to answer a hypothetical.

"Does the president have the authority to unilaterally deny the right to vote to any person based on their race?" asked Durbin.

Barrett cited the Equal Protection Clause and the 14th and 15th Amendments to make clear that no one can discriminate on the basis of race.

Seeming not to grasp her response, Durbin pressed again: "When asked whether or not the president has any authority to unilaterally deny that right to vote for a person based on race, or even gender, are you saying you can't answer that question?"

Amy Coney Barrett is smarter than every Democrat trying to back her into a corner.

When asked again whether she could give a simple yes or no to Durbin's questions, Barrett said, as she has consistently said throughout the three days of hearings, that she would not answer hypotheticals.

"It strains originalism if the clear wording of the Constitution establishes a right, and you will not acknowledge it," said a dissatisfied Durbin.

"Well, Senator, it would strain the canons of conduct, which don't permit me to offer off-the-cuff reactions or any opinions outside of the judicial decisionmaking process," Barrett retorted, "it would strain Article III, which prevents me from deciding legal issues outside the context of cases and controversies; and, as Justice Ginsburg said, it would display disregard for the whole judicial process."

Minnesota Democrat Amy Klobuchar insinuated dishonesty on Barrett's part by continuing a line of reasoning begun by VP contender Kamala Harris the day before, when Barrett said she could not recall whether she was aware of President Trump's statements claiming he would appoint High Court justices who would overrule Obamacare.

"I just find it hard to understand that you were not aware of the president's statements," said Klobuchar, engaging in more back and forth on her knowledge of Trump's objection to the Affordable Care Act (ACA).

"I think that the Republicans have kind of made that clear," Barrett replied. "It's been part of the public discourse.'

"Senator Klobuchar, all these questions — you're suggesting that I have animus or that I cut a deal with the president," Barrett said, calling out her motives, "and I was very clear yesterday that that isn't what happened."

The day before, when Klobuchar tried to trap her on the issue of Roe v. Wade and Barrett's refusal to call it "superprecedent," and thus beyond reversal, Barrett calmly cited left-leaning Harvard Law Prof. Richard Fallon: "Roe is not a superprecedent because calls for its overruling have never ceased, but that doesn't mean that it should be overruled. It just means that it doesn't fall on the small handful of cases, like Marbury v. Madison and Brown v. Board, that no one questions anymore."

When Delaware Democrat Chris Coons tried to tie Barrett to controversial opinions of her mentor, Justice Scalia, Barrett deftly turned the questioning around on Coons.

"I hope that you aren't suggesting that I don't have my own mind or that I couldn't think independently or that I would decide that, oh, let me just see what Justice Scalia has said about this in the past," she said, putting him on the defensive, "because I assure you, I have my own mind."

I hope that you aren't suggesting that I don't have my own mind.

Coons also attempted to draw out her opinion on contraception, asking whether she thinks Griswold was rightly decided.

"I think Griswold is very, very, very, very unlikely to go anywhere," she said. "I think it's an academic question that wouldn't arise, and it's something that I can't opine on, particularly because it does lie at the base of substantive due process doctrine, which does continue to be litigated in the courts today."

"Are you unwilling to say that at least Griswold is not wrong?" Coons asked in another attempt.

"I think Griswold isn't going anywhere unless you plan on passing a law prohibiting couples or all people from using birth control," said Barrett. "Because it seems unthinkable that any legislature would pass such a law — I think the only reason that it's even worth asking that question is to lay a predicate for whether Roe is rightly decided."

The line of questioning led Missouri Republican Josh Hawley to ask, "Are you aware of any active litigation challenging the constitutionality of Griswold v. Connecticut?"

"Are you aware of any litigation in recent decades challenging the constitutionality of Griswold v. Connecticut?"

"Are you aware of any legal movement out there to challenge the constitutionality ofGriswold v. Connecticut?"

To paraphrase T.S. Eliot's line, the confirmation battle ended not with a bang but with a whimper.

"Here's my point," said the Missourian. "I was seven years old when Judge Robert Bork came before this body. ... What we saw, I think the legacy of the Bork hearings contine to reverberate. His name has become a verb — the borking of nominees. I think what we've seen today is the attempted borking of Judge Amy Barrett."

While Republicans had braced themselves for a nuclear confirmation battle over this crucial seat, Wednesday evening saw a quiet, noncontroversial close to the three-day proceedings, with cordial exchanges between Republican Lindsey Graham and Democrats Dick Durbin and Blumenthal.

None of the punches the Democrats threw landed. And the GOP remains confident it has the votes to confirm.

To paraphrase T.S. Eliot's line, the confirmation battle ended not with a bang but with a whimper.