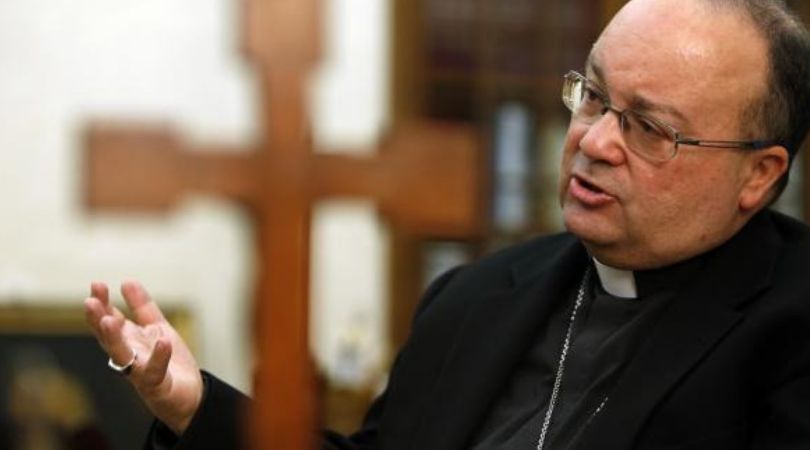 MDINA, Malta (ChurchMilitant.com) - Repeated requests to condemn the actions of a Maltese pro-LGBT priest have gone unanswered by Abp. Charles Scicluna, prompting one group to publish a full-page letter in protest.

As reported by Church Militant in April, the Catholic lay group Pro Malta Christiana (PMC) first expressed dismay that a Catholic priest would appear on state television to state homosexuality is "part of God's plan" and homosexual relations are perfectly normal "so long as they are based on clear love." The statements were made March 8 by Fr. Kevin Schembri on the popular television program Xarabank.

We have prudently waited more than two months for Your Excellency to publicly disassociate the Maltese Church from the scandalous propositions contrary to Christian faith and morals put forward by Father Schembri.

Titled "Open and Respectful Interpellation Directed to His Excellency, the Most Reverend Charles Jude Scicluna, Archbishop of Malta," the document begins:

The Maltese Society for Christian Civilisation — Pro Malta Christiana, presenting its respectful greetings to Your Excellency, requests the attention of Your Excellency regarding the content of the opinions uttered by the Rev. Father Kevin Schembri on the XARABANK discussion programme aired on Malta's state television on March 8 last. It was made clear by the producers of this television programme that Rev. Fr. Schembri was sent by Your Excellency to state the teachings of Holy Mother Church on the question of same-sex attraction and homosexual relations.

We have prudently waited more than two months for Your Excellency to publicly disassociate the Maltese Church from the scandalous propositions contrary to Christian faith and morals put forward by Father Schembri on this television programme. Given the mysterious silence from your Archdiocesan Curia on this grave matter, it is felt that a public and open interpellation directed to Your Excellency is warranted at this critical juncture in order to express the sadness, bewilderment and legitimate disappointment felt by innumerable Catholics in Malta at Your Excellency's silence.

Confusion wrought by Schembri's appearance was exacerbated by the fact he is currently serving as the Maltese curia's defender of the marriage bond for matrimonial nullity cases in Malta.

As for Scicluna, he was appointed by Pope Francis to serve as adjunct secretary for the Sacred Congregation for the Doctrine of the Faith.

As noted by Church Militant:

Since the program's airing, the Maltese curia has been bombarded by scores of emails by confused Maltese Catholics asking for a doctrinal clarification. The archbishop's silence may arguably be construed as an implicit confirmation of Malta's episcopal double standard when it comes to treating Catholics who oppose the homosexual agenda in Malta as compared to those promoting this agenda. His treatment of Pro Malta Christiana compared to his silence on Fr. Schembri's televised remarks speaks volumes.

In the public letter addressed to Scicluna, the PMC states:

We humbly take the liberty of reminding Your Excellency that as the Catholic Church has taught constantly over two thousand years, the primary duty of a Bishop is to publicly defend, protect and promote the sacred deposit of the faith against all heresies, errors and scandalous propositions. This is a duty, Your Excellency, which cannot remain unfulfilled, regardless of the circumstances in which the shepherd of the flock finds himself.

The PMC letter also addresses Scicluna's silence rather than expressing support for faithful Catholics praying the Rosary in response to a homosexual pride parade in the city of Valletta last fall. The letter describes the event as "sordid, vulgar and anti-Christian."