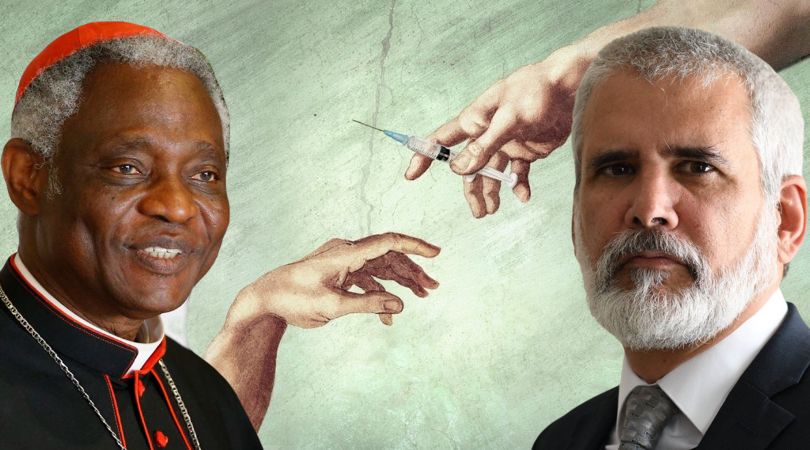 VATICAN CITY (ChurchMilitant.com) - A renowned scientist is warning the Vatican that its moral position in promoting COVID-19 vaccines to serve the "common good" is "sacrificing to a false endpoint" and "based on false information."

Dr. Robert Malone, inventor of the mRNA vaccine technology, met with Cdl. Peter Turkson in a historic meeting at the Vatican last Monday, the vaccinologist revealed in an exclusive interview with Church Militant.

The scientist revealed how he shared with the cardinal "strong data" from virologist "Dr. Geert Vanden Bossche and other leading biologists," that the policy of universal vaccination is based on "flawed assumptions" and "also has the risk of creating super viruses."

"It's bad science and what we're doing is compromising individual rights," Malone said, confirming Church Militant's report on Dr. Bossche's prognosis that mass immunization could turn "a relatively harmless virus into a bioweapon of mass destruction" and "wipe out large parts of our human population."

This is the first time a senior Vatican official has consulted with an expert who identifies as a "gentle dissenter" from the mainstream narrative on COVID-19 vaccines. Cardinal Turkson is prefect of the Vatican's Dicastery for Promoting Integral Human Development.

"I was very grateful for the cardinal's willingness to meet with me. It was very generous, and it was on very short notice," Malone said, emphasizing that he was also "grateful for the advocacy of numerous people within the United States" who made the meeting possible.

The "community believed that it would be useful to have me have an informal conversation with the cardinal, and particularly with this cardinal. Their belief was that he would be more open and highly influential and receptive to listening to this alternative," Malone explained.

The Vatican has been slammed for neglecting to include scientists critical of COVID-19 vaccines and only including experts on one side of the debate in its various conferences uncritically promoting the experimental jab.

I cannot intellectually allow myself to go to a position of the Church having been compromised by the financial interests of a large pharmaceutical industry.

When Church Militant asked if Turkson gave Malone an assurance that he might be invited to a Vatican conference to talk about his invention or his views, the scientist replied: "The cardinal did not provide, nor did I ask, for any ongoing role. It was not my objective."

Malone told Church Militant that his goal was not to force a "radical change" in the Church's current position on vaccines, but a "subtle modification" that would help the Church "stake out a moral position" that would serve it well over time.

The scientist said he was proposing a "middle space" between the "dichotomy of pro-vaccine or anti-vaccine" that "makes good sense scientifically and ethically."

"What I shared with Cdl. Turkson were some observations and ideas where it's not only vaccine for everybody or no vaccine [for anybody] because vaccine is bad, but rather a middle ground position," Malone emphasized.

The scientist noted that Turkson was "very aware that in these times, there's a long history along the whole economic chain of opportunism" and "that there are major financial interests in play with the pharmaceutical industry."

"I cannot intellectually allow myself to go to a position of the Church having been compromised by the financial interests of a large pharmaceutical industry," Malone said, when asked why a "social justice-minded" Church was displaying a preferential option for Big Pharma.

My sense is that he had significant awareness of many aspects of these things, but not awareness of the latest information that the vaccines are not able to prevent infection.

"I just can't allow myself to think that. If I go there, then I despair," remarked the expert in virology, immunology and molecular biology, and is credited with over 100 articles in peer-reviewed scientific and medical journals.

Malone said he saw his meeting with Cdl. Turkson as critical and his role as a "responsible messenger" not to engage in "conflict with others, but to provide information and encourage others to think and give them the information."

"I was very careful in my wording and he was very careful in his listening. To his great credit, he took extensive notes in his notebook concerning the key points I was making," Malone said, explaining how Turkson had shared his own experiences and what the Church was doing to advocate for vaccine equity.

The scientist also explained how he made the cardinal aware that "the risk associated with this disease is not uniformly distributed" but is "almost exclusively in the very old and obese, and others with certain preexisting risk factors."

For the general healthy population "the risk is infinitesimal" despite "the scare propaganda that is pushed on us almost excessively, that we all have this risk," Malone observed.

Malone reflected that in terms of the Delta variant:

I know he was aware of the controversy concerning the vaccine risks. And and I don't wish to breach the confidence of the communications, but he did share with me some examples of vaccine adverse events that had been experienced by the Church.

Malone explained how Plato's "noble lie" had taken over vaccine propaganda based on the idea that "there is a cadre of elite who have the true knowledge that is so complex" it "can't be shared with the average person."

So, ordinary people should "merely accede to the wisdom of the leaders" and it is "acceptable for those leaders" to tell "the noble lie in service of the common good."

I know he was aware of the controversy concerning the vaccine risks.

"We have this captured in federal law" when "in the context of poliovirus campaign" in 1984 the government clearly stated that "any information which would cause vaccine hesitancy or resistance, whether true or untrue, shall be discouraged and shall not be allowed."

"It's been accepted worldwide, that it's okay to mislead people about the truth because it's for their own good," Malone explained, predicting that vaccine coercion was leading the world "to a very dark place."