GLASGOW, Scotland (ChurchMilitant.com) - Scottish thugs swore and spat at a group of Catholics exiting a church after Mass.

The Orange Order, a Protestant fraternal organization in Northern Ireland and Scotland, had a parade on June 7 in Glasgow that passed near St. Alphonsus Church near Gallowgate.

As Catholics were leaving their Saturday evening vigil Mass, a crowd of young men approached — apparently in some connection to the ongoing Orange March. They screamed and cussed at the priest and parishioners, calling them all "Fenian ba****ds" and calling the priest a pedophile.

The priest, Canon Tom White, also got spat on repeatedly. The archdiocese of Glasgow said in a press statement, "The priest was spat upon. Spittle landed on the back of his head. He wiped it away. Another mouthful of thick spittle was spat into his eye socket. Again he wiped it away leaving his hand full of the vile liquid."

Free clip from CHURCH MILITANT Premium
WATCH MORE LIKE THIS
Police say they are investigating the incident.
In its press statement, the Glasgow archdiocese asked rhetorically, "What kind of society is it that allows ministers of religion and churchgoers to be intimidated and attacked by a group which has a long history of fomenting fear and anxiety on city streets?"
It continued, "Why is the Orange Order still allowed to schedule its intimidating parades on streets containing Catholic churches at times when people are trying to get in and out for Mass?"
Before the incident, police who had been keeping watch near the Catholic church had been called away in response to an incident elsewhere.

The priest was spat upon.

One Protestant tried to assault Canon White with a stick — the archdiocese referred to it as a "pole," while secular sources called it a "baton." But reports say parishioners protected the priest.

Orange Order leadership claimed no members were involved in the confrontation and said the perpetrators were "a small group of young men who turned up to watch the parade go past."

The official statement came from Jim McHarg, Grand Master of the Grand Orange Lodge of Scotland. He wrote, "Whilst it may be said that the Orange Order has different opinions to the Roman Catholic Church, I have no hesitation in stating that today we stand with Canon White in saying that this sort of behavior has no place in society."

McHarg said he even instructed Orange Order staff to call the parish to apologize to Canon White and has written to the archdiocese.

He also claimed that some Orange Order members witnessed the threats to the priest and were valuable witnesses to the police.

The Orange Order's name comes from William of Orange, a Dutch nobleman and Protestant who invaded England and replaced King James II, a Catholic. James II fled to France, and William was crowned William III of England in 1689 (known as William II of Scotland and nicknamed "King Billy" in Scotland and Northern Ireland). When James II returned to Ireland with an army, William defeated him at the Battle of the Boyne in 1690. 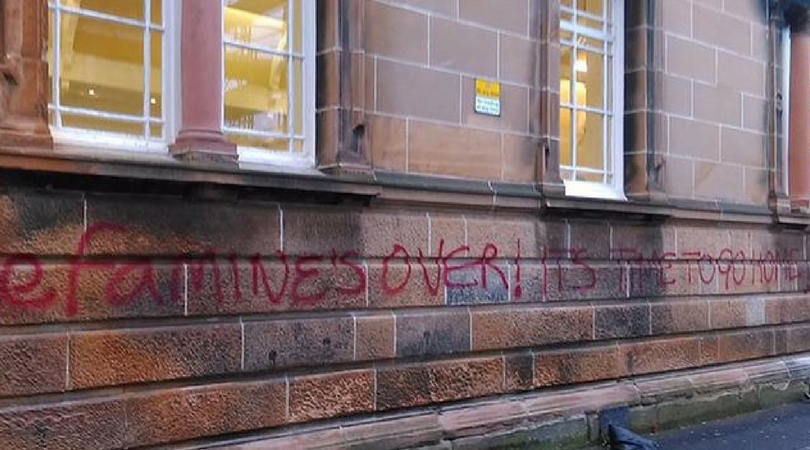