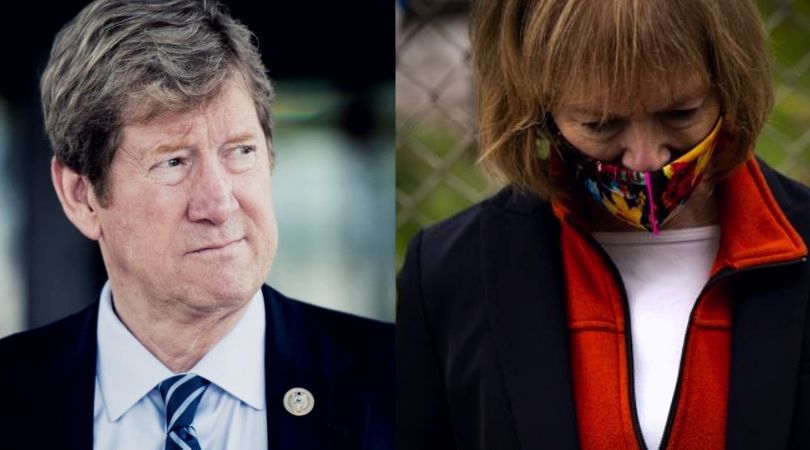 ST. PAUL, Minn. (ChurchMilitant.com) - The Republican contender is neck and neck with the present Democrat senator representing Minnesota, according to a new poll.

A KTSP/SurveyUSA poll published last week shows Republican Jason Lewis has caught up to Democrat incumbent Tina Smith. Less than two weeks away from the election, the virtual tie (43% to 42%) ends the double-digit lead (47% to 36%) Smith enjoyed in mid-September.

Women and suburban voters are a factor in the current tie. Carleton College political analyst Steven Schier told 5 Eyewitness News that advertisements painting Lewis as negative toward women are not as effective as they once were.

In 2018, former Minnesota governor Mark Dayton chose Smith to fill the Senate seat left empty by Al Franken, who was forced to resign in shame owing to sexual misconduct.

"I'm the only senator to have worked at Planned Parenthood," Smith touted in a late-September tweet. "I've seen first-hand how far Republican attacks on reproductive rights will go. If they get this SCOTUS seat, they WILL work to overturn Roe v. Wade."

The current senator worked as the vice president of external affairs at Planned Parenthood of Minnesota, North Dakota and South Dakota in the early 2000s.

"Senator @TinaSmithMN made a career & fortune taking the lives of the unborn & she's wearing it as a badge of honor. It's disgraceful," Lewis retorted with his own tweet. "She also said on the Senate floor that providing medical treatment to a newborn who survives a botched abortion attempt would be 'inappropriate.'"

Senator @TinaSmithMN made a career & fortune taking the lives of the unborn & she's wearing it as a badge of honor. It's disgraceful.

She also said on the Senate floor that providing medical treatment to a newborn who survives a botched abortion attempt would be "inappropriate." https://t.co/giR4HnI3QI

Lewis refers to Senators Tina Smith and Amy Klobuchar as blocking legislation to protect newborn babies who survive abortion. Smith said the bill "would give politicians in this room the power to make medical decisions for women and their families. This bill intimidates providers and forces physicians to provide inappropriate medical treatment even when it is not in the best interests of their patients or their families."

"As if you need another reason to vote for @TinaSmithMN, Trump endorsed Jason Lewis at last night's chaotic rally," Planned Parenthood said in an October 2019 tweet. "We proudly support and endorse Tina Smith for Senate, a proven leader who's dedicated her career to advancing our reproductive health and rights."

She also said on the Senate floor that providing medical treatment to a newborn who survives a botched abortion attempt would be 'inappropriate.'

In 2019, NARAL Pro-Choice America (NARAL) gave Smith a score of 100% for her pro-death position and rated Lewis at 0% for his pro-life position.

"We absolutely CANNOT have a Trump-backed anti-choice extremist like Jason Lewis representing Minnesota's women and families," NARAL said in a tweet. "It's absolutely critical that we re-elect reproductive freedom champion @TinaSmithMN for #MNSen."

We absolutely CANNOT have a Trump-backed anti-choice extremist like Jason Lewis representing Minnesota's women and families. It's absolutely critical that we re-elect reproductive freedom champion @TinaSmithMN for #MNSen. https://t.co/5C80cT1Ahh

The other Minnesota senator, Amy Klobuchar, endorses Smith, as does U.S. Rep. Ilhan Omar, who recently made headlines for ballot harvesting.

"Throughout my time in the legislature, I've known Tina Smith to be accessible and motivated to learn the issues facing Minnesotans of every age, race, religion, gender and ethnicity," said Omar. "Tina Smith is a strong advocate for women, for immigrant and refugee families who are feeling extremely threatened in the current political climate, and she believes that every person deserves to see the economic benefits of a strong economy that works for everyone."

While the pro-abortion lobby is behind Smith, pro-life groups are backing Lewis.

Jason Lewis will defend the most vulnerable in Washington. We're glad to see him take on abortion extremist Sen. Tina Smith. As a former vice president of Planned Parenthood, Smith advocated abortion on demand and the funneling of taxpayer dollars to the big abortion industry.

Since coming to Washington, it's been more of the same. She has even helped block efforts to end late-term abortion and infanticide — an abysmal record reflected in her 'F' rating on our National Pro-Life Scorecard.

"There are few issues that highlight the stark contrast between Senator Tina Smith and me more than abortion. As a former Planned Parenthood executive who made a fortune off of providing abortions, Senator Smith is as radical as it gets," he added.

"The riots in Minneapolis and the impact and devastation and all of the fallout that is continuing as we enter October are going to be on the ballot in Minnesota when voters go to the polls, whether they've already voted or will vote on Election Day," Minnesota GOP Chairwoman Jennifer Carnahan told Fox News. "That is a top-of-mind issue for folks."

"Prior to George Floyd, we were actually pretty happy with our neighborhood," said Zach Hudson, who recently left Minneapolis with his wife and child. "I grew up in the suburbs and had preconceptions of what living in Minneapolis would be like, and when we decided to move here, it turned out to not be as bad as I had thought it might be. Our neighbors are fantastic, and we never had issues with people trying to break in. We didn't really have much violent crime near us."

But after Floyd's death, Hudson said there "was a week of mayhem" blocks from his home.

"Just a couple weeks ago, I witnessed a shooting on the street next to my house," he said.

"I don't think anyone's really happy with the leadership," Hudson explained. "The city council has kind of flip-flopped on their decision to defund the police. At first, they came out strongly, had this big rally in the park, said, 'We're going to defund the police, and there's nothing anyone can do about it,' and now, they're not so sure about that."

In an article published in early October, Lewis spelled out how the election between him and Smith is "a choice between anarchy and American values."

The senatorial hopeful spotlighted how he and Smith starkly contrast each other on law and order:

Smith's comment on the need to "reimagine" policing is something right out of Bernie Sanders' "soft on crime" manifesto. She even wants to strip personal liability protection from police men and women. Most disturbing, Smith actually said from the floor of the U.S. Senate that "there is something dangerously wrong with the role that police play in our society.

This inflammatory and irresponsible rhetoric has only emboldened the violent mob.

As the husband and son-in-law of former St. Paul police officers, I will always back the blue, you may rest assured. That is why I've received the endorsement of multiple police organizations including the Minnesota Police and Peace Officers' Association and the Minnesota Fraternal Order of Police.

Gun Sense Voter lauds: "Smith has committed to governing with gun sense as a priority."

Smith's comment on the need to 'reimagine' policing is something right out of Bernie Sanders' 'soft on crime' manifesto.

Everytown for Gun Safety (EGS) says it works "to elect a Gun Sense President and Gun Sense Candidates up and down the ballot by spending millions in key presidential battleground states and registering thousands of voters." The group officially endorses Smith, as does Moms Demand Action Gun Sense's candidate distinction.

The National Rifle Association gives Smith a grade of 'F' and Lewis a grade of 'A' for his commitment to the Second Amendment.