Body taken in a hearse to the airport to be flown to Peoria, Illinois 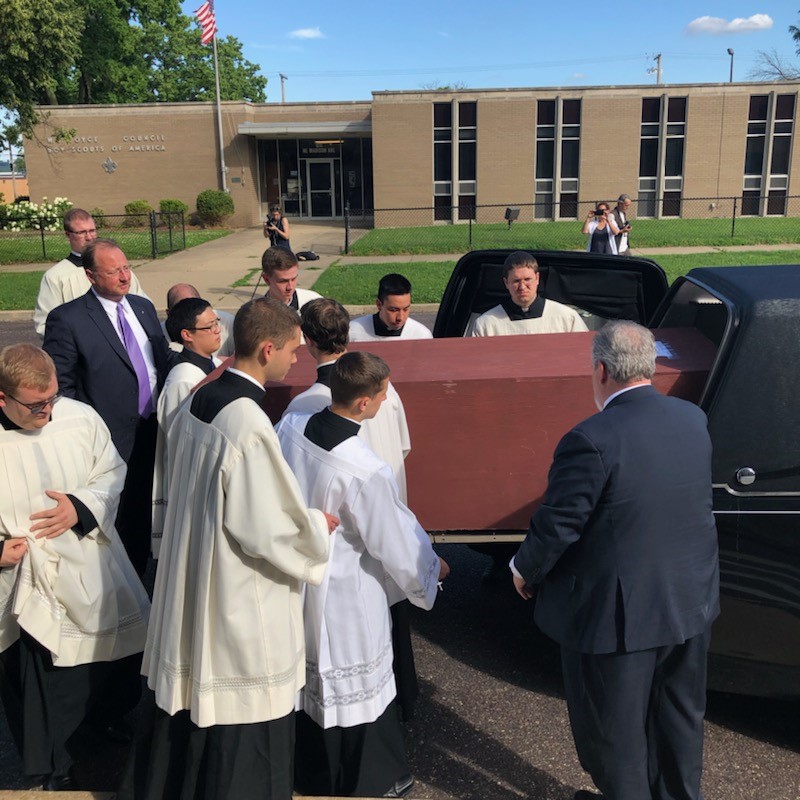 UPDATE, 6/27/2019: Archbishop Sheen arrived in Peoria Thursday, where he was taken to the Cathedral of St. Mary of the Immaculate Conception. Greeted by Bp. Daniel Jenky, flanked by clergy, religious and lay faithful, the bishop sprinkled holy water on Sheen's casket before he was brought to his permanent resting place: the side altar dedicated to Our Lady of Perpetual Help. 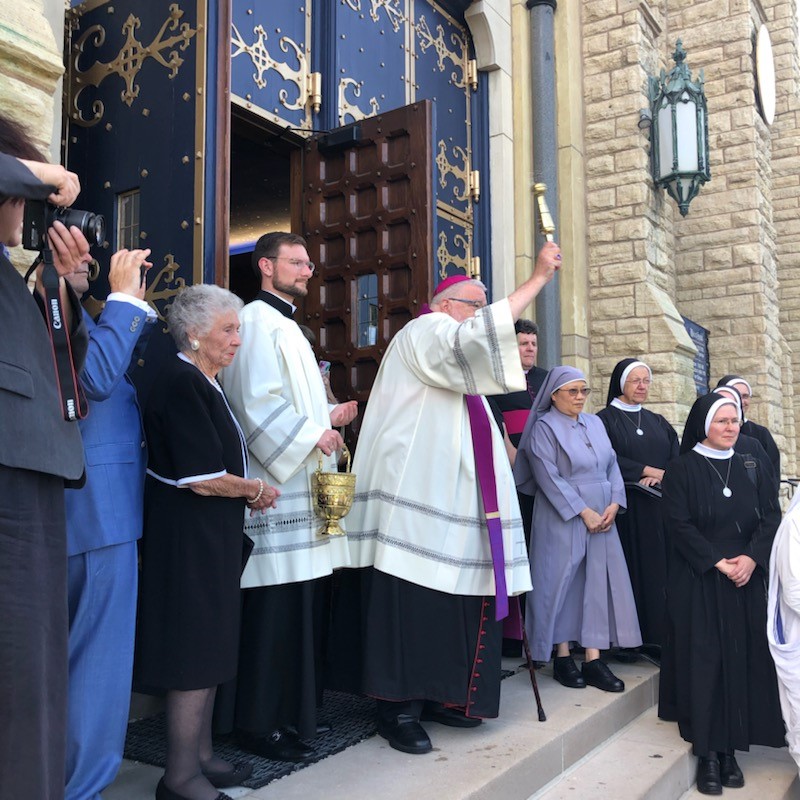 The Peoria diocese has confirmed that Sheen's cause for canonization has resumed, and has noted the "divine coincidence" that this historic moment took place on the feast of Our Lady of Perpetual Help.

"Bishop Jenky has notified the Vatican indicating that civil litigation has ended and that Sheen's remains have been transferred," according to the press release by the diocese of Peoria. "The Vatican has confirmed that the Cause for Beatification has now resumed."

In the early morning hours Thursday, the remains of the beloved archbishop were quietly removed from the crypt of St. Patrick's Cathedral, carried down the steps of the 51st Street entrance and into a black hearse to be taken to the airport.

Joan Sheen Cunningham, niece of the archbishop, who ultimately prevailed in the three-year lawsuit with the archdiocese of New York over who gets to keep Sheen's remains, arrived with her attorney and family before dawn, at around 4:45 a.m. Monsignor James Kruse, vicar general of the diocese of Peoria, also arrived at the same time.

Church Militant learned that Cdl. Timothy Dolan had insisted on disinterring Sheen's body at 5 a.m. in order to avoid crowds and media publicity, and had in fact placed strict rules against any media being present during the event.

According to a statement by the Peoria diocese released Thursday morning, "no liturgical ceremony or public gathering could be held during the transfer. Therefore, the transfer of the remains was done without prior public notice."

Although Church law disallows public celebration in this instance, it does not forbid media; the prohibition of media was imposed by Cdl. Dolan, who is reportedly embarrassed after having lost multiple appeals in the protracted litigation and wanted the transfer done as quickly and as secretly as possible, away from cameras.

After approximately one hour, the body of the archbishop was carried down the steps of the cathedral at 5:55 a.m., with two priests along with Msgr. Kruse sprinkling holy water on the casket before it was placed inside the hearse to be driven to the airport.

Church Militant has confirmed that Dolan did not attend the disinterment, even though he was in New York and made time to attend a dedication ceremony later in the day for Mets pitcher Tom Seaver.

This marks the end of Sheen's 40 years buried at St. Patrick's, and is the long-awaited result of three years of litigation between Cunningham and the New York archdiocese, which had reneged on its promise to hand over Sheen's body, after the Peoria diocese has spent 16 years and approximately $1 million advancing his cause for canonization. Peoria had relied on the promises of Dolan's predecessor, Cdl. Edward Egan, to give Peoria his remains at the appropriate time.

According to the Vatican, Thursday's transfer means Sheen's cause for canonization is now resumed.

"Bishop Jenky has notified the Vatican indicating that civil litigation has ended and that Sheen’s remains have been transferred," the press release states. "The Vatican has confirmed that the Cause for Beatification has now resumed."

Cunningham was forced to bring the matter to court in 2016 after multiple meetings with Dolan proved fruitless. The courts consistently ruled in Cunningham's favor, with the archdiocese appealing the court rulings a total of five times, spending hundreds of thousands of dollars in legal fees.

On June 8, New York's highest court ruled that Sheen's remains could be disinterred and sent to Peoria, ending the litigation: "Motion for leave to appeal denied with one hundred dollars costs and necessary reproduction disbursements."

Steve Cohn, attorney for Cunningham, told Church Militant, "The Court of Appeals did the right thing. Finally, Abp. Sheen has the opportunity to continue what was his life's work for, hopefully, eternity."

The Peoria diocese has prepared a new resting place for Abp. Sheen.

"The remains will be encased into a marble monument inside the Cathedral of St. Mary of the Immaculate Conception in Peoria," the press release explains. "Venerable Archbishop Sheen's new tomb is located at the side altar dedicated to the Blessed Mother Mary, Our Lady of Perpetual Help."

Sheen's disinterment took place on the feast day of Our Lady of Perpetual Help, coinciding with the altar of his new resting place.

Next steps are an official decree by the pope of the miracle wrought through Sheen's intercession, which involved a stillborn baby who came to life after 60 minutes and who is a healthy young boy today; scientists and doctors have declared that his case cannot be scientifically explained. The pontiff would then call for Sheen's beatification, with a date to be set for the ceremony to take place in Peoria.

"Once the date for the Beatification is granted by Pope Francis, Cardinal Giovanni Angelo Becciu, Prefect for the Congregation of the Causes of Saints, would come to Peoria to preside at the ceremony," the press release states.

Sheen's disinterment took place on the feast day of Our Lady of Perpetual Help, coinciding with the altar of his new resting place.

Public visitation of Sheen's new tomb in Peoria will begin as soon as Friday.

The full news release from the Peoria diocese follows:

Earlier this month, on June 7, 2019, the three-year long legal litigation concerning the transfer of Sheen’s remains ended when the New York Court of Appeals, the state’s highest court, rejected the final appeal of the Archdiocese of New York. Shortly after this ruling, the Archdiocese of New York and the Diocese of Peoria cooperated in arranging for the transfer. This transfer followed civil law and Church law. The proper civil permits for the transfer were secured. Church law requires that the transfer of the remains of one considered for beatification must to be done without any solemnity. As a result, the transfer could not be publicized in advance. Also, no liturgical ceremony or public gathering could be held during the transfer. Therefore, the transfer of the remains was done without prior public notice.

Early this morning, June 27, 2019, Joan Sheen Cunningham, niece of Venerable Archbishop Sheen, and Patricia Gibson, Chancellor and Attorney for the Diocese of Peoria, along with funeral home and cemetery personnel, gathered at St. Patrick Cathedral in New York. The remains of Sheen were disinterred from the basement crypt under the main altar at St. Patrick Cathedral. Sheen’s remains were immediately taken to LaGuardia airport and flown to O’Hare airport to be transported to the Cathedral of St. Mary of the Immaculate Conception in Peoria.

The remains will be encased into a marble monument inside the Cathedral of St. Mary of the Immaculate Conception in Peoria. Venerable Archbishop Sheen’s new tomb is located at the side altar dedicated to the Blessed Mother Mary, Our Lady of Perpetual Help.

Patricia Gibson was appointed as the official witness of the disinterment and transfer of the remains as required by the Vatican and Church law. Patricia Gibson stated:

After working eighteen years with Bishop Jenky on the Cause for Beatification, it was a great privilege and honor to be present and witness the transfer of Archbishop Sheen's remains to his home cathedral in Peoria where he served Mass as a youth and was ordained priest 100 years ago. Now that the three years of legal litigation has ended, I am grateful that the Archdiocese of New York cooperated with this transfer. I am excited for the next steps in the Cause and pray that a beatification will happen very soon.

The Congregation of the Causes of Saints in Rome will present the alleged miracle to Pope Francis for his decree authenticating the miracle attributed to Sheen’s intercession. This alleged miracle involved the miraculous healing of a newborn infant who was without vital signs for over sixty minutes.

Although the date of Beatification is not known at this time, Bishop Jenky hopes and prays that these decrees from Rome will be issued in the coming weeks. Bishop Jenky continues to be hopeful that Venerable Archbishop Fulton Sheen will be Beatified during this 100th anniversary year of his ordination to the priesthood in Peoria. Everyone is encouraged to continue offering prayers for the Beatification of Venerable Archbishop Fulton Sheen.

Bishop Jenky invites everyone to visit the new tomb of Venerable Archbishop Fulton Sheen in the Cathedral of St. Mary of the Immaculate Conception in Peoria. Soon a permanent schedule of Cathedral hours will be published. But, for this week end, the Cathedral will be open at these times:

6/27/2019: This article has been updated to include the Peoria diocese's press release.