Pope Offers Halal Meal on Third Day of the Poor 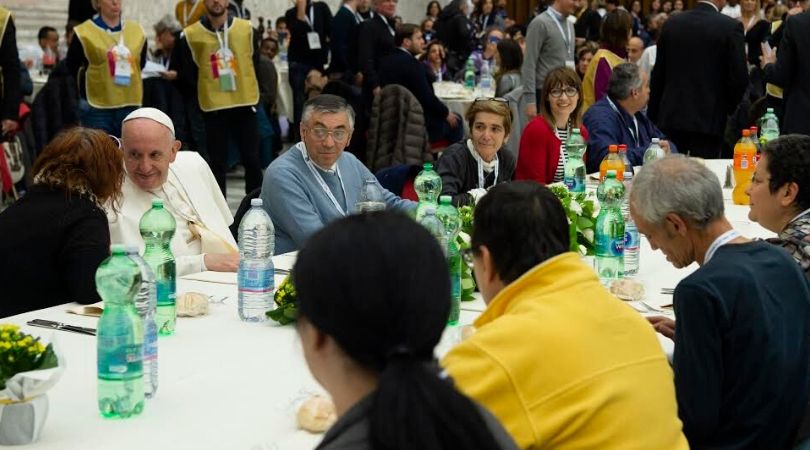 Pope Francis' annual meal with the poor in St. Peter's Basilica took place again last month, gathering 1,500 people in the Paul VI Hall during celebrations marking the Third Day of the Poor. For the first time since the Sunday lunch with the poor was established in 2016, a meal observant of other religious restrictions was served: The menu offered a bolognese lasagna without pork (an essential ingredient in the centuries-old recipe). Wine was absent from the table as well.

The adjustment was announced by Msgr. Rino Fisichella, president of the Pontifical Council for Promoting the New Evangelization: "There's no pork in here, so all guests can eat with no problems." According to newspaper Il Giornale, this was a "precise choice desired by Pope Francis."

A Nod to Muslims

The Pope's inspiration was his Italian counterpart Cdl. Matteo Maria Zuppi, archbishop of Bologna, who last October, on the feast of St. Petronius, patron saint of Bologna, made headlines for the archdiocese's choice to offer the public a Muslim-friendly version of tortellini, a traditional bolognese pasta filled with raw prosciutto, mortadella (a pork-based bolognese luncheon meat) and pork loin. As an alternative to the classic recipe, the archdiocese offered a chicken breast filling option, an unheard-of modification.

Taking into account that this has never been conceded to the Jewish community (which also doesn't consume pork), and the political tone that has accompanied both Pope Francis and Cdl. Zuppi, these particular gestures have been largely interpreted as a signal of deference to the Muslim community.

Several outlets branded the lunch a "halal meal," with The Daily Muslim describing it as follows: "Pope and Islam dialogue with lasagna: Pope Francis served pork-free sauce lasagna … for those who follow the Koran. A rigorously halal menu was provided in the Paul VI Hall in the Vatican."

Newspaper La Verità deemed the absence of wine a much graver issue, not only because "it's anti-Christian, but also because it is a profanation of the Wedding Feast at Cana, a symbol of Christ that the Church has hidden. … And 'if anyone is ashamed of me and my words … the Son of Man will be ashamed of them'" (Mark 8:38).

The celebrations for the feast of St. Petronius of Bologna, which originally inspired Pope Francis, had the "welcoming of immigrants" as theme, with the festivities being led by an art group whose performances were focused on a project about open borders.

Opposition leader Matteo Salvini made it clear that changing the tortellino recipe was an "attempt to cancel our history, our culture," to which the archdiocese of Bologna promptly replied, calling the controversy "unacceptable fake news."

Salvini wasn't the only one to claim disrespect for tradition. Apolitical bolognese chefs have also expressed their disapproval. Ivanna Barbieri, director of the Italian Federation of Chefs, said, "For us, the tortellino is sacred. We have so many other options in Bolognese cuisine, something else could have been chosen."

Pasta chef Alessandra Spisni said that "tortellini are only the classic ones. If one desires to do something different, they shouldn't be calling it 'tortellino.' This is our tradition, and we can't change it to please everybody." Alberto Salvadori, president of the Confraternity of Tortellino, even called for a boycott.

Ultimately, the initiative was proven pointless, since "only two or three Muslims" actually purchased the chicken tortellini.

Cardinal Zuppi allowed for the modification of a traditional dish that's been part of Bolognese Christmas lunches ever since the 12th century to cater to members of a community who weren't even interested in attending an all-day Catholic festivity in the first place.

We have introduced this innovation in order to allow everyone to consume one of the main symbols of our city. … The shape of the tortellino reminds us of something that embraces everyone, just like when becoming cardinal, our bishop's duty will extend over the borders of the diocese and embrace the entire world. Our tortellino is the symbol of how, setting off from Bologna, Zuppi will also take care of the general Church.

Since taking over the see of Bologna in 2015, Zuppi has been working steadily and discreetly, but his importance is becoming noticed. The cardinal is admired by the biggest names of progressive politics in Italy, he is close to the Muslim community and he is overall sympathetic to left-wing causes.

After Zuppi became a cardinal, the Italian media started an aggressive pro-Zuppi campaign. Considering the current political instability in Italy, with the most powerful men in the Vatican advocating for more intervention in Italian politics, all of this indicates that Zuppi is set for a prominent role in the Italian Church.

All of this indicates that Zuppi is set for a prominent role in the Italian Church.

Let's take, for instance, one of his latest moves. Bologna is the capital of Emilia-Romagna, a historically communist region, cradle of many progressive bills that later came to pervade the national legislature. Elections for a new Emilia-Romagna president will occur in January, in a dispute between the current leadership (from the Italian Democratic Party, close to Zuppi) and a candidate from the League (Matteo Salvini's party).

If the League wins Emilia-Romagna, it'll be a historic victory; it's a decisive moment for the future of the Italian Left. Cardinal Zuppi, right in the midst of the heat of the electoral campaign, launched an anti-sovereignty pamphlet called "You Shall Hate Your Neighbor," filled with arguments against Salvini's main policies. It's difficult to believe this hasn't been orchestrated.

"Matteo Zuppi, the Leader the Left Needs" is the title of a November article from L'Espresso, in which the author not only flatters Zuppi for "speaking to people like him," but also demeans his predecessor, dubia Cdl. Carlo Caffarra, whom he calls a "Cerberus." In a recent interview on national television, Cdl. Zuppi was highly praised by the progressive establishment for spouting clichés like: "I believe Hell is when ... mercy isn't allowed in."

And the cherry on the cake was this weekend's launch of a documentary film about Cdl. Zuppi called The Gospel According to Matthew Z. Profession, Bishop. ("Matthew" is English for "Matteo.") Many of the scenes of his daily life include the cardinal cycling around Bologna (apparently riding a bike is what allows the faithful to recognize a true pastor nowadays, the Roman collar of the "street priest"), and during the exchange with actor Alessandro Bergonzoni, Zuppi explains key points in his theology, including why "Jesus was a syndicalist."

Just for the record, "Cerberus" Cdl. Caffarra used to ride his bike around Bologna as well, and he also left five million euros to the archdiocese of Bologna to invest in a solidarity fund for families after his resignation. But because Carlo Caffarra was a fierce advocate of orthodoxy and Church teaching, no one in the Italian Left will ever make a film about him.