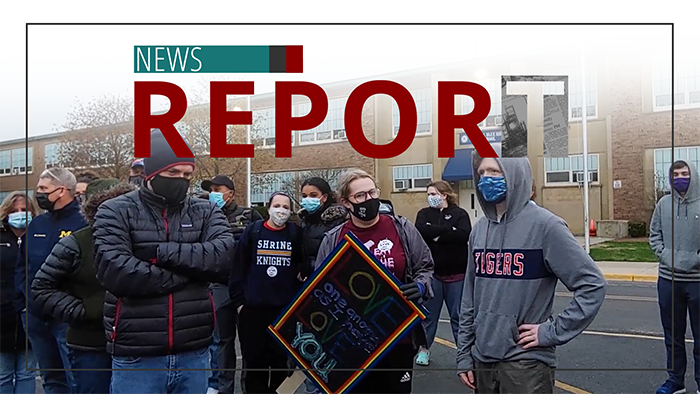 A Catholic school teacher resigned last week from the Shrine of the Little Flower elementary school in Royal Oak, Michigan after being confronted for having a Harvey Milk poster in her classroom. The late Milk was a so-called gay icon and activist from California in the 1970s.

School administrators confronted the teacher, who reportedly felt bullied and resigned. Another teacher resigned in support.

A group of outraged parents and alumni organized a protest Monday, claiming the school is not respecting inclusivity and diversity. The Detroit Resistance group met them to counterprotest in support of faithful priests.

Detroit Resistance member: "We're here to make sure that people understand there's a difference ... and to make them aware that God loves them, yes, but God does not love sin."

To diffuse the situation, the pastor of the Shrine, Fr. Joe Horn, met with the husband of the woman who resigned, and then met with protesters outside.

The parents and alumni had signed a petition with two general demands: (1) that two priests be canceled from school decision-making and be replaced by laypeople, and (2) that the Shrine Catholic schools be more open to so-called LGBT ideology and critical race theory.

Michael Voris: "The push by the school principal, James Mio, to get the schools up to speed with being all woke. Within minutes of sending an announcement to parents that he was introducing the whole racism issue into the curriculum, Church Militant started getting contacted."

Curiously, Fr. Horn told the small crowd the stalemate was not about Church teaching.

Fr. Horn: "This is not about homosexual, same-sex attraction ... I'm so grateful people are asking that question because, if you ask Dawn, she'll say it's not about that. It's about advocacy, it's about being able to speak on other people's behalf. It's not about the Church's stance."

The pastor is now saying there's a misunderstanding that can be remedied by cool heads and better communication. Yet when he called for prayer, the disgruntled crowd dispersed very quickly.

There are many questions that remain in this particular case. Nonetheless, it's a symbol of what's occurring with Catholic schools across the country. Clarity, understanding and backbone are what's needed — now, more than ever.