SIOUX CITY, Iowa (ChurchMilitant.com) - The Sioux City diocese is admitting it failed for decades to report a known pederast who abused at least 50 boys.

The Associated Press reports that the diocese admitted Wednesday it had concealed Fr. Jeremy Coyle's history of abuse, which involved dozens of young males from approximately 12–15 years of age. The abuse took place before 1986, when the diocese claims he was removed from active ministry. Coyle afterwards moved to New Mexico, where he led a private life with minimal supervision.

Reuben Ortiz, who housed the priest in his home for seven months last year after the priest suffered a car accident, discovered details about his history of molestation during that time.

"This guy lived in my home for seven months, and was a predator loose on the prowl," Ortiz told Church Militant. "How he was not on any sex abuse list for people to observe is beyond me."

"When we found out about the seriousness of his abuse, my wife and I asked Jerry, 'Can you promise us that you will never harm our son?'" Ortiz continued. "Our son is 15, and Fr. Jerry who we knew for 12 years said, 'NO!'"

This guy lived in my home for 7 months, and was a predator loose on the prowl.

After confronting the diocese about Coyle, Ortiz received a response from Fr. Brad Pelzel, vicar general for the Sioux City diocese, admitting the extensive nature of the abuse.

In the February 12, 2018 letter obtained by Church Militant, Pelzel writes, "When he self-reported his situation to then-Bishop Soens and asked for help, Fr. Coyle admitted that, for a period of about 20 years, he victimized approximately 50 school boys, varying from 7th to 10th grade."

The number of victims could be higher, however, as there was minimal supervision of the priest after he was removed from ministry in 1986.

Pelzel warns Ortiz in the letter that the priest should move out of his home: "[T]he Review Board cannot condone the risk you take by allowing Fr. Coyle to live in your home," recommending that Ortiz help Coyle find assisted living in the area.

Shortly after, Coyle moved into an assisted living residence in Albuquerque, New Mexico next to a school. After a tip, Fort Dodge police interviewed the priest and searched his residence in September.

"You are asking about something that happened in the mid-1980s and it is not possible for me to know why something was done or not done at that time," Pelzel replied. 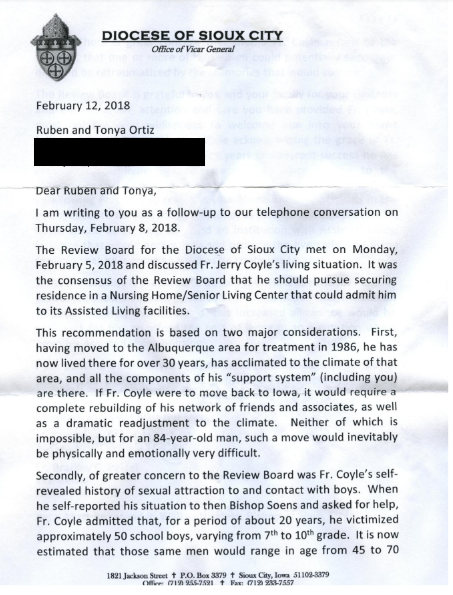 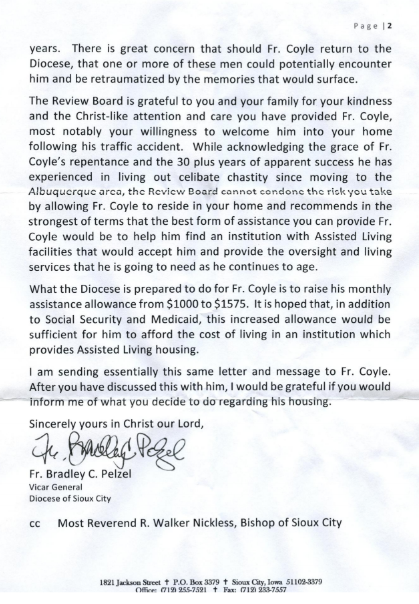 In later correspondence, Pelzel clarified, "I believe that the answer to that most likely would be due to three factors: 1) there were no protocols to do so at that time — although we now know there should have been, 2) the Diocese had not received a complaint from any victim and 3) it would have been difficult for the Bishop to 'turn him in' after he voluntarily came forward."

Pelzel did not explain why it would have been "difficult" for the bishop at the time (Bp. Lawrence Soens) to have turned in a self-admitted pederast with a significant record of abuse. Soens, who retired in 1998, was later found to have himself abused students when he was principal at a Catholic school.

"He was removed from ministry, his priestly faculties were suspended, he was sent to treatment and has lived a life of prayer, penance and chastity since then," Pelzel said of Coyle. "He is supervised, has not celebrated a Mass in public since the day he reported his abuse, and is not allowed to present himself as a priest or to be with children."

According to Ortiz, however, there was little oversight of his whereabouts after he was removed from ministry, and he knew of at least one occasion where he was allowed to publicly offer Mass after his removal from active ministry.

"Jerry told us that his diocese allowed him to concelebrate as a priest, so his priestly faculties were not completely removed," Ortiz told Church Militant. Also, Coyle lived in a private apartment where he could "come and go as he pleased."

"[W]e will never know exactly what this sick man did in New Mexico," Ortiz said.

Church Militant contacted the assisted living home where Coyle resides, but was told by administration that Coyle is not speaking to the press.

11/8/2018: This article was updated to include information on Fr. Coyle's current geographical location.