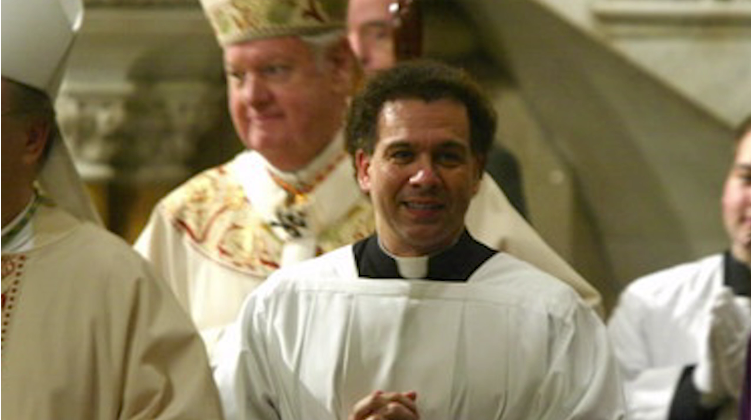 Note: This is an involved story reaching back decades and involving people of high rank. Many of the facts are sordid and difficult to digest, and we note them here not to scandalmonger, but rather to expose this corruption to the light of day. It is only when the disinfecting light of the sun is allowed to shine on the filth that has festered in the dark that a cleansing and reform can truly begin.

NEW YORK (ChurchMilitant.com) - Sources from within the New York archdiocese are revealing that a corrupt homosexual network reaches into the top ranks of the New York archdiocese, involving the priest personnel office, the communications director, the vicar general, and even the former archbishop of Baltimore, Cdl. Edwin O'Brien — and that Cdl. Timothy Dolan is aware of much of this and does little to stop it.

According to sources who have spoken with ChurchMilitant.com on the record and anonymously, Msgr. Greg Mustaciuolo, the vicar general and the second most powerful person in the New York archdiocese, has reportedly long been aware of Fr. Peter Miqueli's embezzling of hundreds of thousands of dollars, as well as his gay lifestyle with prostitute Keith Crist. Additionally, sources claim he has known for decades about other active gay priests in New York, and that he works to protect them and shelter them from the public eye — and that Dolan has him in place in large part for this purpose.

"Well, it's not secret among the clergy in the archdiocese of New York that Msgr. Mustaciuolo is in fact the protector of Peter Miqueli," said a source in the archdiocese who goes by the alias "Bob" to protect his identity. "That's a very well-known fact that has been established."

Even more, multiple sources from within the archdiocese have confirmed with ChurchMilitant.com that Mustaciuolo is an active homosexual, and that he himself is allegedly protected by Cdl. Edwin O'Brien, former archbishop of Baltimore, former archbishop for Military Services, and current grand master of the Equestrian Order of the Holy Sepulchre of Jerusalem.

O'Brien's relationship with Mustaciuolo stretches back to when O'Brien was rector of St. Joseph's Seminary in Dunwoodie from 1985–89, when Mustaciuolo was a student.

Mustaciuolo was given the nickname "Pet" by fellow seminarians, a moniker with a double entendre: He was the lone seminarian chosen to walk O'Brien's Labrador, but also one with an especially intimate relationship with O'Brien — one that has continued to this day. Sources go further to claim this relationship was sexual in nature.

Multiple sources have also confirmed O'Brien had special relationships with Fr. Peter Miqueli and his gay-for-pay prostitute boyfriend Keith Crist, who would chauffeur him from the airport when O'Brien flew in from Rome (when he was rector of the Pontifical North American College) to offer Confirmation Masses at Fr. Miqueli's small, isolated parish in Roosevelt Island — an unusual act for a cardinal of such high rank.

Crist, who is forbidden to be on archdiocesan property, reportedly picked up O'Brien from the airport during each visit, and was present at "special dinners" with O'Brien's small coterie of friends, who invariably included Fr. Miqueli, along with Bp. Gerald Walsh, Vicar for Clergy, and others from the chancery.

It's alleged that the servers, after placing dinner on the table, were dismissed, and that carousing and other activities took place after they left.

Parishioners have also confirmed that Miqueli and Crist were very open about the fact that they stayed with Cdl. O'Brien when they were in Rome.

And multiple parishioners once witnessed Crist screaming at a faithful Catholic in Miqueli's parish with whom he'd gotten into a feud, shouting, "I will tell O'Brien — and O'Brien will destroy you."

ChurchMilitant.com reached out to Mustaciuolo last week for comment, but as of press time we've received no response. We have also reached out to the director of priest personnel, Msgr. Edward Weber, as well as to Fr. Anthony Sorgie, former dean of St. Joseph's, both of whom are implicated in this story, but have not heard back from either. We also asked Communications Director Joe Zwilling to comment, but he has also failed to respond to inquiries.

"Pretty much these are the key players," Bob explained "You have Msgr. Weber, Anthony Sorgie and Gregory Mustaciuolo ... all three, including Peter Miqueli, have been — it is a well-known fact throughout the archdiocese that these men are either gay or bisexual" — or at the very least, have knowledge of the sexual activity of some of the named parties.

[T]hese relationships of the people we've been talking about here, which would be Peter Miqueli, Sorgie, Mustaciuolo, Weber, and in fact Cdl. O'Brien — these were all relationships that were forged back in the 1980s at Dunwoodie in St. Joseph Seminary. ... [It] might be shocking to hear, but these men regularly had conversations that I was privy to where they jokingly and openly recollected masochistic activity and parties and things that they did back in the seminary.

After confirming he heard these conversations firsthand, Bob commented, "Cardinal O'Brien was referred to as the 'master.' He was the 'master.' Whatever that meant, only they know."

Miqueli has been particularly brazen in his friendship with Crist, who often appeared by his side publicly — to the puzzlement of parishioners. Bob said that "part of his arrogance and his confidence" was his knowledge that he could "do anything that he wanted to do at any parish he was assigned" because of his protectors in the chancery.

"[H]e was acting with impunity," he said, "both at his previous assignment before he arrived in the Bronx — he acted with impunity even in Manhattan. He was there for many, many years, and he had pretty much that entire community held hostage, a very small community that tried their best within their means to report what was happening there with him."

When the faithful lodged complaints against Miqueli with the archdiocese, they apparently stopped at the desk of Msgr. Mustaciuolo.

It was the repeated inaction of the archdiocese that spurred parishioners of St. Frances de Chantal Church, the parish from which Miqueli resigned last fall, to file a lawsuit in August 2015 against him and the archdiocese. The Bronx district attorney has since launched a criminal probe as well.

According to sources, although he is vicar general — a role that normally requires stepping in for the cardinal for public Masses and other events when he is away — Mustaciuolo often avoids the public spotlight, preferring to operate behind the scenes from his office on Madison Avenue. In the words of one source, Mustaciuolo is largely a "desk priest."

His influence in the archdiocese reaches back years, as is evidenced in this 2006 document circulated among New York priests frustrated with Egan's dictatorial style of governance. Among the clergy's complaints:

With regard to important policies and decisions that impact upon the welfare of the Archdiocese, it is evident that the Cardinal does not seek advice or counsel from the many competent and experienced priests who so faithfully serve as pastors and members of his chancery staff. Instead, it is regrettably and seemingly apparent that the Cardinal relies on the advice of his priest-secretary [Msgr. Mustaciuolo] who enjoys a most limited and meager pastoral experience.

In spite of Cdl. Dolan's knowledge of Mustaciuolo's behavior, his name is reportedly being considered for the bishopric of Metuchen — a move that would get him out of the chancery, as he is apparently disliked by various members there.

In the next installment: Monsignor Mustaciuolo allegedly protects and promotes another gay priest.

Learn more about the details in this explosive episode of "The Download—A Tale of Two Cardinals."