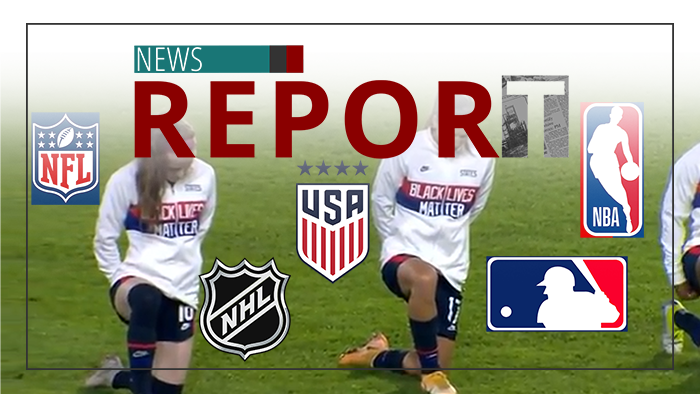 After infiltrating the media, academia, big business and government, the cultural Left is spreading its tentacles throughout professional sports.

NFL PSA announcer: "Today on 'National Coming Out Day,' we come together with one clear message."

The NFL is now withholding privileges from players who haven't gotten the jab, and some teams are forcing unvaccinated players to wear yellow wrist bands.

Cole Beasley: "It's all about the young players who don't have a voice and are reaching out to me every day because they told me if they don't get vaxxed, they'll be cut."

All this after the NFL declared, "Football is gay." But is the NFL "everything for everybody," as it claims?

Ben Shapiro: "Football is everything for everyone except if you happen not to believe in the morality of particular sexual behavior."

As for basketball, the NBA quickly took advantage of the Black Lives Matter hysteria.

Recently retired president of the Boston Celtics Danny Ainge puts it into perspective.

Danny Ainge: "Just like Hollywood. ... There's not that many players that I care what they have to say."

And as for the national pastime, Major League Baseball has been flying so-called gay flags at its ballparks and abruptly moved its 2021 All Star game from Atlanta to Denver — because of a Georgia voting law.

Even the National Hockey League had its own share of virtue signaling. And now, the Olympics joins the four major professional sports in this new kind of competition.

Plummeting ratings is one result of the sports industry capitulating to the Left.

Reporter: "Laurel Hubbard, who transitioned from male to female in 2012, is considered a serious medal contender."