Bishop Bernard Fellay dismissed a heartfelt plea from a priest asking him to stop protecting predators.

In a 2016 letter written by a priest of the Society of St. Pius X (SSPX), he beseeches Fellay, then-superior general, to come clean about the Society's involvement with Fr. Frédéric Abbet, SSPX, convicted by a Belgian court of child sex crimes and sentenced to five years in prison.

"I know the reputation of the Society is at stake and that the condemnation of one of its former members will be negative for it," wrote the priest, "but it would be much more harmful in the long term to learn that authorities in the Society have all attempted to exonerate a former member, to the detriment of the justice due to the victims."

As Church Militant has reported, Abbet was only able to abuse boys at the Brussels SSPX academy L'École de Notre Dame because Fellay — in direct violation of a 10-year ban on Abbet being around children unsupervised — assigned the pedophile to live under the same roof as young boys at the academy. Abbet would go on to abuse three of them, one victim as young as six.

Fellay has never acknowledged his responsibility, nor has he apologized to the victims and their families for his role contributing to their sons' abuse.

Father Jurgen Wegner and Fr. Benoît Wailliez, both former priors at the Brussels chapel assigned to supervise Abbet, were also guilty, as they were both made aware of Abbet's past abuse allegations in Switzerland and failed to exercise oversight over the priest, granting him free and easy access to children.

In a letter Church Militant published, Secretary General Christian Thouvenot made clear he had communicated the restrictions on Abbet both to Wegner and to Wailliez, neither of whom appeared to have taken them seriously.

The criminal negligence of no fewer than three SSPX clergy so shocked the prosecutor that he shouted in court that it should have been the Society put on trial instead of just Abbet.

Their criminal negligence also led the panel of judges to accuse the SSPX of "criminogenic" behavior — a French term denoting the promotion of repeated criminality.

Three European victims' advocacy groups also published a joint statement condemning the Society's deception and obstruction of justice during trial, and their refusal to help the victims.

"The latter are the ones who must receive our aid and our assistance," the priest wrote in his 2016 letter to Fellay. "It is for them that one must fight, that one must uncover all facts and proofs that can help them."

"No victims have sullied the Society; quite the opposite with regard to the predators," he added.

"Look at all the scandals that have shaken the Church a little everywhere in the world for some years," he continues. "Bishops have been condemned for covering up these horrors. Spare the Society from suffering this shame."

Spare the Society from suffering this shame.

He closes the letter with a warning and a final plea.

"The [victim's] family will not stop there; they have a thirst for justice and their distress is such that they will continue to fight, and if the courts are closed to them, they will turn to the press," he wrote. "The Society will be tarnished," going on to say, "Little by little my trust is eroding; you can rebuild it."

Fellay's response was a polite "Mind your own business."

"Don't involve yourself in this matter, but leave it to the superiors, who have the graces of office to handle it as they must," wrote Fellay.

After this display of clericalism, he concluded the curt missive by claiming that victims are to blame for besmirching the good name of the SSPX: "Unfortunately you're wrong when you say that no victims have sullied the Society."

While the Belgian court sentenced Abbet to five years in prison, the priest has yet to serve a day behind bars, fleeing to Switzerland, where locals claim he is staying with his parents, and has even been spotted taking his nephews to the local swimming pool.

The SSPX informed the victim's family that Abbet has been expelled from the Society, but Fellay will not answer questions as to his whereabouts, nor will he offer help in locating Abbet in order to bring him to justice, in spite of the fact that Fellay's connections could easily locate the pederast — who continues to roam free, with easy access to children.

The priest who wrote Fellay eventually left the SSPX. 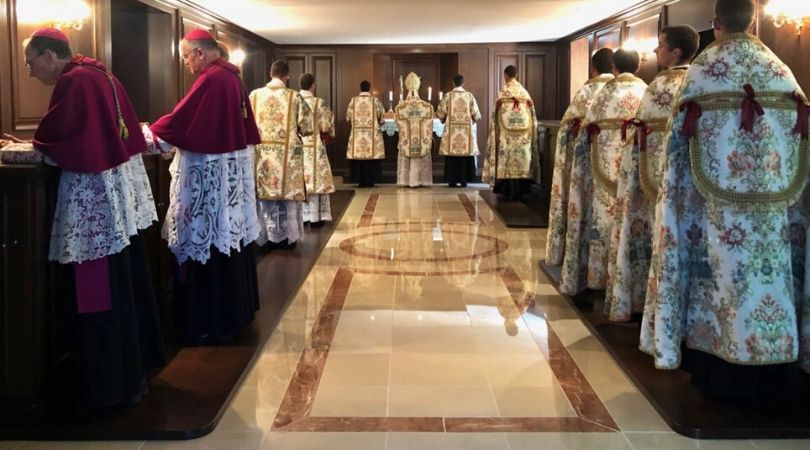